Is data mining for disease tracking good for public health or just another snooper's charter? Data mining has made many of us worry about who's looking at our Web searches and social media posts. But tracking health-related online activity could save lives. Question is: do we want it? We've heard it said often before: technology has the potential to turn our mobile devices into lifesaving tools. Flu Trends. Skip to content Thank you for stopping by. 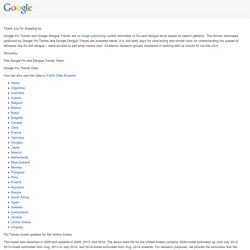 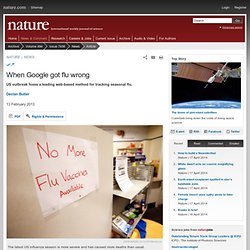 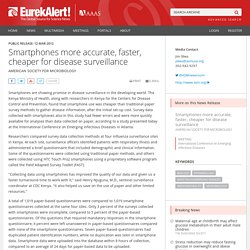 The Kenya Ministry of Health, along with researchers in Kenya for the Centers for Disease Control and Prevention, found that smartphone use was cheaper than traditional paper survey methods to gather disease information, after the initial set-up cost. Survey data collected with smartphones also in this study had fewer errors and were more quickly available for analyses than data collected on paper, according to a study presented today at the International Conference on Emerging Infectious Diseases in Atlanta. 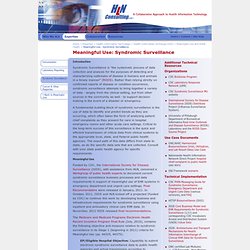 Rather than relying strictly on confirmed reports of disease or condition occurrence, syndromic surveillance attempts to bring together a variety of data - largely from the clinical setting, but from other sources in the community as well - to support decision making in the event of a disaster or emergency. The Health Effects of Social Networking. Here’s the list of terms the government uses to monitor Twitter for disease outbreaks. Sep 25, 2012 Earlier this year, the Department of Homeland Security released a list of keywords it tracks on social media websites. 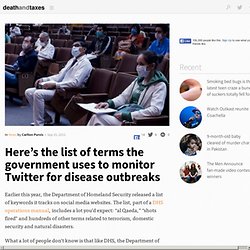 The list, part of a DHS operations manual, includes a lot you’d expect: “al Qaeda,” “shots fired” and hundreds of other terms related to terrorism, domestic security and natural disasters. What a lot of people don’t know is that like DHS, the Department of Health and Human Services also has an interest in monitoring social media and its own list of keywords it monitors on Twitter. 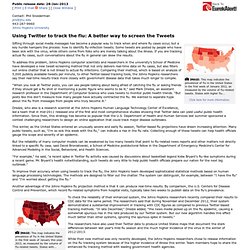 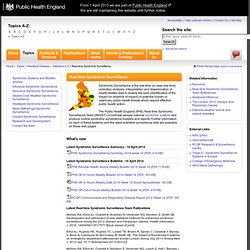 Elliot AJ, Hughes HE, Hughes TC, Locker TE, Brown R, Sarran C, Clewlow Y, Murray V, Bone A, Catchpole M, McCloskey B, Smith GE. Olympics-London looks to get ahead of disease threat. By Kate Kelland, Health and Science Correspondent LONDON, May 30 (Reuters) - If someone's stomach is churning and cramping after eating a burger or club sandwich from a pop-up vendor at the London Olympics, Brian McCloskey plans to be among the first to hear about it. 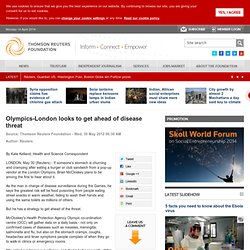 As the man in charge of disease surveillance during the Games, he says the greatest risk will be food poisoning from people eating street snacks in warm weather, failing to wash their hands and using the same toilets as millions of others. But he has a strategy to get ahead of the threat. McCloskey's Health Protection Agency Olympic co-ordination centre (OCC) will gather data on a daily basis - not only on confirmed cases of diseases such as measles, meningitis, salmonella and flu, but also on the stomach cramps, coughs, headaches and fever symptoms people complain of when they go to walk-in clinics or emergency rooms. "The main thing is to know what's happening," he adds. Sickweather. Who is sick? Track the Spread of Sickness and Disease at GermTrax. Hopkins researchers find 'Google Flu Trends' a powerful early warning system for emergency departments. 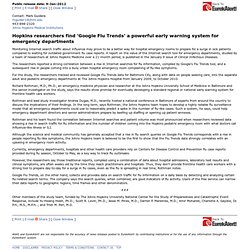 A report on the value of the Internet search tool for emergency departments, studied by a team of researchers at Johns Hopkins Medicine over a 21-month period, is published in the January 9 issue of Clinical Infectious Diseases. Social Media Tracks Disease Spread: Scientific American Podcast. After Haiti’s earthquake two years ago, cholera swept the country. 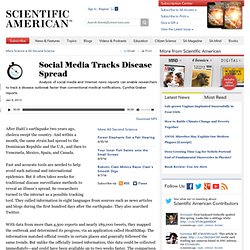 And within a month, the same strain had spread to the Dominican Republic and the U.S., and then to Venezuela, Mexico, Spain, and Canada. Fast and accurate tools are needed to help avoid such national and international epidemics. New study: Cholera in Haiti tracked more rapidly by social media than traditional methods. Feasibility study of geospatial mapping of chronic disease risk to inform public health commissioning. Abstract Objective To explore the feasibility of producing small-area geospatial maps of chronic disease risk for use by clinical commissioning groups and public health teams. Study design Cross-sectional geospatial analysis using routinely collected general practitioner electronic record data. Online tools will help monitor potential disease outbreaks at the Olympics. Specifically, the authors pointed to the Global Public Health Intelligence Network and HealthMap as tools that could rise to such a challenge, at least on the disease surveillance side.

They also mentioned Bio.Diaspora--a tool that tracks global air travel patterns to predict the spreading of infectious diseases--as technology relevant to such a cause, according to an article in Medical News Today. Lead researcher Kamran Khan, of St. Michael's Hospital in Toronto, and his colleagues used similar methods to perform an analysis of the 2010 Winter Olympic Games in Vancouver. By narrowing down that most visitors to Vancouver via air travel originated from 25 cities, they were able to center their real-time threat monitoring efforts. Such efforts will be used for actual risk assessment at the 2012 Summer Olympic Games in London. Crowdsourcing, citizen sensing and Sensor Web technologies for public and environmental health surveillance and crisis management: trends, OGC standards and application examples.

Disease Sleuths Surf For Outbreaks Online. Most folks who wake up feeling crummy will sit down with a computer or smartphone before they sit down with a doctor. They might search the Web for remedies or tweet about their symptoms. And that's why scientists who track disease are turning to the Internet for early warning signs of epidemics.