How Big Business Is Helping Expand NSA Surveillance, Snowden Be Damned. Since November 11, 2011, with the introduction of the Cyber Intelligence Sharing and Protection Act, American spy agencies have been pushing laws to encourage corporations to share more customer information. 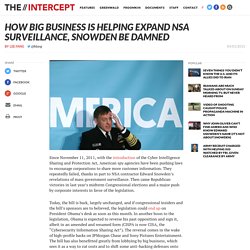 They repeatedly failed, thanks in part to NSA contractor Edward Snowden’s revelations of mass government surveillance. Then came Republican victories in last year’s midterm Congressional elections and a major push by corporate interests in favor of the legislation. Today, the bill is back, largely unchanged, and if congressional insiders and the bill’s sponsors are to believed, the legislation could end up on President Obama’s desk as soon as this month. In another boon to the legislation, Obama is expected to reverse his past opposition and sign it, albeit in an amended and renamed form (CISPA is now CISA, the “Cybersecurity Information Sharing Act”).

8 Things You Wouldn’t Think Are Spying On You, But Are. Jake Anderson, The Anti Media The next time you take a trip to the mall, make sure you give those mannequins a big smile. 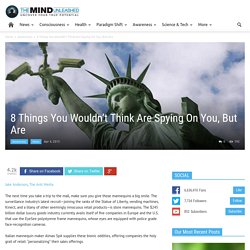 The surveillance industry’s latest recruit—joining the ranks of the Statue of Liberty, vending machines, Kinect, and a litany of other seemingly innocuous retail products—is store mannequins. The $245 billion dollar luxury goods industry currently avails itself of five companies in Europe and the U.S. that use the EyeSee polystyrene frame mannequins, whose eyes are equipped with police grade face-recognition cameras. Here's What The Future Of Insect And Nano Drones Looks Like [VIDEO] Tiny drones are widely expected to become a fixture of American airspace come 2015 as Federal Aviation Administration rules become more relaxed. 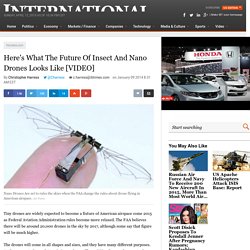 The FAA believes there will be around 20,000 drones in the sky by 2017, although some say that figure will be much higher. Interesting Facts about NSA Spying Tactics Exposed by CanTheySeeMyDick.com. The Internet was lit up by John Oliver’s interview with Edward Snowden since the host actually managed to make his chat subject talk about dick pics, laugh and give high five. 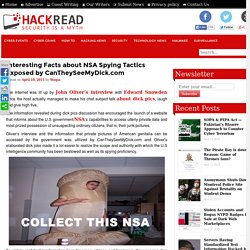 The information revealed during dick pics discussion has encouraged the launch of a website that informs about the U.S government/NSA‘s capabilities to access utterly private data and most prized possession of unsuspecting ordinary citizens, that is, their junk pictures. Oliver’s interview and the information that private pictures of American genitalia can be accessed by the government was utilized by CanTheySeeMyDick.com and Oliver’s elaborated dick joke made it a lot easier to realize the scope and authority with which the U.S intelligence community has been bestowed as well as its spying proficiency. To obtain confidential information from American citizens and foreigners, the agencies dive into all kinds of mechanisms that are available and they can even see their dicks. Watch the full interview here: Snowden Shows John Oliver How The NSA Collects Your Dick Pics. John Oliver dedicated 30 min of his last night’s HBO program discussing about U.S surveillance programs. 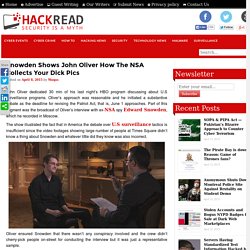 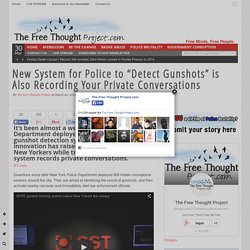 However, the innovation has raised privacy concerns among New Yorkers while tracking loud bangs, the system records private conversations. RT.com Questions arose after New York Police Department deployed 300 hidden microphone sensors around the city. They are aimed at identifying the sound of gunshots, and then activate nearby cameras and immediately alert law enforcement officials. 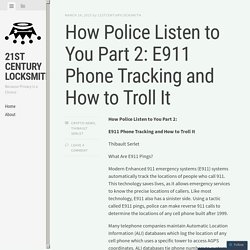 Police State: Streets So Filled With Surveillance, No One Even Knows What All... Melissa Melton March 25, 2015 (Truthstream Media) This video is just a drive through an average, moderately sized city in modern-day America. 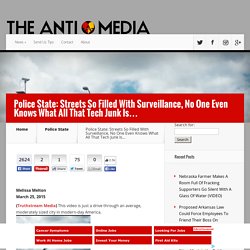 We are way beyond just traffic cameras… The average city intersection is jammed with so much surveillance technology, that it would be difficult to even sort out what is what. During a couple of intersections we observed, there were not only eye-in-the-sky cameras, but angles of every direction of traffic, plus several antennas relying data to the authorities, a red light camera photographing license plates and generating revenue, and what else?

Post Office Caught Recording Plates, Faces of Customers. Within an hour of a KDVR-TV reporter asking postal authorities about a hidden camera, which was positioned to capture and record the license plates and faces of customers, the device was removed. 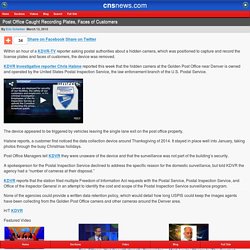 KDVR Investigative reporter Chris Halsne reported this week that the hidden camera at the Golden Post Office near Denver is owned and operated by the United States Postal Inspection Service, the law enforcement branch of the U.S. Postal Service. The device appeared to be triggered by vehicles leaving the single lane exit on the post office property. Halsne reports, a customer first noticed the data collection device around Thanksgiving of 2014. Study reveals We are being tracked by Our Smartphones - Every 3 Minutes. A new study reveals our own smartphones are constantly tracking our movements after every 3 minutes – Our apps love to know where are we. 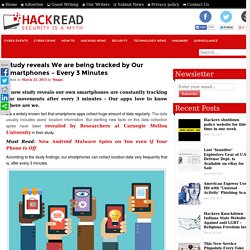 It is a widely known fact that smartphone apps collect huge amount of data regularly. The data usually includes users’ location information. But startling new facts on this data collection spree have been revealed by Researchers at Carnegie Mellon University in their study. Must Read: New Android Malware Spies on You even if Your Phone is Off According to the study findings, our smartphones can collect location data very frequently that is, after every 3 minutes.

Researchers asked 23 individuals to normally use their phones and then the team tracked location data requests made by every single device through specially designed software. Internet backbone. Nsa octopus. Cctv. Nsa. Your iPhone, iPad and Mac (OS X) May Be Under CIA Surveillance AnonHQ. iSpy: How The CIA Targeted Apple. Researchers working with the CIA have conducted a multi-year, sustained effort to break the security of Apple’s iPhones and iPads. (Image: The Intercept) New reporting by The Intercept published Tuesday reveals a years-long effort by the Central Intelligence Agency, alongside partners both inside and outside of government, to crack the digital security systems of the Apple’s signature iPhone and iPad products. The IoT: A Dystopian Nightmare Where Everyone And Everything Will Be Monitored. Michael Snyder March 4, 2015 (Activist Post) Can you imagine a world where your home, your vehicles, your appliances and every single electronic device that you own is constantly connected to the Internet?

This is not some grand vision that is being planned for some day in the future. This is something that is being systematically implemented right now. In 2015, we already have “smart homes”, vehicles that talk to one another, refrigerators that are connected to the Internet, and televisions that spy on us. 15 Facts About the NSA’s Domestic Spying Program - Free & Equal. “Don’t Let It Happen”: Orwell’s Prophetic Final Words On The Madness Of The M... It's enough to make you wonder if he had special powers...

This footage from a 2003 BBC docudrama about George Orwell’s life and works is so true, it’s terrifying. Some of the great author and activist’s final words on how he envisaged the future are very well known, but this clip is fantastic for gathering all his thoughts in one place (and sharing them with anyone who is still snoozing). Orwell predicts there will be “No emotions except fear, rage, triumph and self abasement.” He goes on to prophesize that “the sex instinct will be eradicated and we shall abolish the orgasm.” Sound weird? Sending to NSA. Wanna hear a secret? NSA's SIM Card Scandal Bigger Than You Think. Vladimir Platov February 23, 2015 (Activist Post) Stolen encryption keys are just the beginning.

The NSA appears to have compromised big telecom, IT manufacturers, online banking, and even passports, starting on the factory floor. Recent days have been marked by a record number of news stories regarding the US and its allies trying to establish total control over Internet users. DARPA Spending Millions Improving Voice Recognition Surveillance Tech. Cassius MethylFebruary 24, 2015 (ANTIMEDIA) Between 2015 and 2017, the Pentagon will have the ability to decipher human voices in surveillance audio even if background noise makes the covertly recorded conversations inaudible. Reining in the Surveillance Society. Citizenfour. 1.8 gigapixel ARGUS-IS. World's higest resolution video surviellience platfor... That's love for country. Privacy. Nothing to hide. BREAKING: The NSA Is Hiding Spyware In The Hard Drives Of Major Computers. It was reported this week that the NSA has discovered how to hide spyware inside the hard drives of consumer computers.

According to recent reports, the software allows the NSA to eavesdrop on pretty much any activity that is taking place on the computer. This recent development was discovered by the Russian cyber-security company Kaspersky Lab, when they found personal computers in 30 countries infected with one or more spy programs connected with the NSA. The Great SIM Heist: How Spies Stole the Keys to the Encryption Castle. AMERICAN AND BRITISH spies hacked into the internal computer network of the largest manufacturer of SIM cards in the world, stealing encryption keys used to protect the privacy of cellphone communications across the globe, according to top-secret documents provided to The Intercept by National Security Agency whistleblower Edward Snowden.

They're about power. Bulk Collection of Signals Intelligence: Technical Options. The Digital Arms Race: NSA Preps America for Future Battle. Shocking: Here’s Why Snowden Won’t Use An iPhone, And Neither Should You. Edward Snowden's lawyer reveals extent of spy software on Apple iPhones. Actually listen. Big brother. Constitution not emails. No warrant. 5 Things We Learned About the NSA in 2014. Guerrilla surveillance camera destruction hits the U.S. Seattle Camover. Ur being monitored. I'll b watching u. Cameras at politicians. Wtf.

(Reuters / Frank Polich) Whistleblower Edward Snowden and journalist Glenn Greenwald joined forces via video link at an Amnesty International event in the US to speak to a packed hotel ballroom about the dangers of government metadata collection. Mobile Site Preview. The Hidden Role of the Fusion Centers in the Nationwide Spying Operation agai... This report, based on documents obtained by the Partnership for Civil Justice Fund, provides highlights and analysis of how the Department of Homeland Security (DHS)-funded Fusion Centers used their vast anti-terrorism and anti-crime authority and funds to conduct a sprawling, nationwide and hour-by-hour surveillance effort that targeted even the smallest activity of peaceful protestors in the Occupy Movement in the Fall and Winter of 2011.

Out of the Shadows: the Fusion Centers' Spying Operation against the Occupy Movement and Peaceful Protest. Read Snowden’s comments on 9/11 that NBC didn’t broadcast. Quantifying Privacy: A Week of Location Data May Be an ‘Unreasonable Search’ » Visiting Websites About Privacy Gets You Put in an NSA Database of “Extremi... In Surprise Call from Exile, Snowden Calls Out U.S. FBI Director. ARGUS-IS: Could the Pentagon's 1.8 gigapixel drone camera be used for domesti...

How the secret police tracked my childhood.