NSA surveillance: A guide to staying secure by Bruce Schneier

Edward Snowden: NSA whistleblower answers reader questions. How NSA access was built into Windows. A CARELESS mistake by Microsoft programmers has revealed that special access codes prepared by the US National Security Agency have been secretly built into Windows. 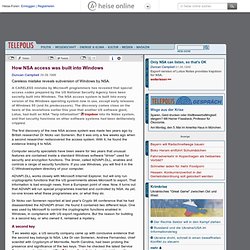 The NSA access system is built into every version of the Windows operating system now in use, except early releases of Windows 95 (and its predecessors). The discovery comes close on the heels of the revelations earlier this year that another US software giant, Lotus, had built an NSA "help information" trapdoor into its Notes system, and that security functions on other software systems had been deliberately crippled.

The first discovery of the new NSA access system was made two years ago by British researcher Dr Nicko van Someren. But it was only a few weeks ago when a second researcher rediscovered the access system. With it, he found the evidence linking it to NSA. ADVAPI.DLL works closely with Microsoft Internet Explorer, but will only run cryptographic functions that the US governments allows Microsoft to export. Rfc3924. NSA Laughs at PCs, Prefers Hacking Routers and Switches. The NSA runs a massive, full-time hacking operation targeting foreign systems, the latest leaks from Edward Snowden show. 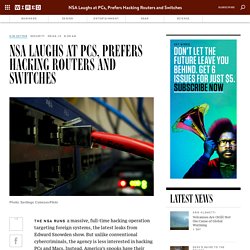 But unlike conventional cybercriminals, the agency is less interested in hacking PCs and Macs. Instead, America’s spooks have their eyes on the internet routers and switches that form the basic infrastructure of the net, and are largely overlooked as security vulnerabilities. Under a $652-million program codenamed “Genie,” U.S. intel agencies have hacked into foreign computers and networks to monitor communications crossing them and to establish control over them, according to a secret black budget document leaked to the Washington Post.

U.S. intelligence agencies conducted 231 offensive cyber operations in 2011 to penetrate the computer networks of targets abroad. This included not only installing covert “implants” in foreign desktop computers but also on routers and firewalls — tens of thousands of machines every year in all. XKeyscore: NSA tool collects 'nearly everything a user does on the internet'. Agreements with private companies protect U.S. access to cables’ data for surveillance. In months of private talks, the team of lawyers from the FBI and the departments of Defense, Justice and Homeland Security demanded that the company maintain what amounted to an internal corporate cell of American citizens with government clearances. 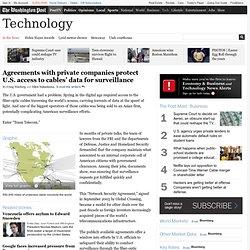 Among their jobs, documents show, was ensuring that surveillance requests got fulfilled quickly and confidentially. This “Network Security Agreement,” signed in September 2003 by Global Crossing, became a model for other deals over the past decade as foreign investors increasingly acquired pieces of the world’s telecommunications infrastructure. The publicly available agreements offer a window into efforts by U.S. officials to safeguard their ability to conduct surveillance through the fiber-optic networks that carry a huge majority of the world’s voice and Internet traffic.

Negotiating leverage has come from a seemingly mundane government power: the authority of the Federal Communications Commission to approve cable licenses. Gen. NSA surveillance: how to stay secure. Now that we have enough details about how the NSA eavesdrops on the internet, including today's disclosures of the NSA's deliberate weakening of cryptographic systems, we can finally start to figure out how to protect ourselves. 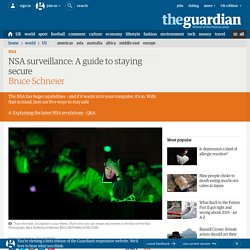 For the past two weeks, I have been working with the Guardian on NSA stories, and have read hundreds of top-secret NSA documents provided by whistleblower Edward Snowden. I wasn't part of today's story – it was in process well before I showed up – but everything I read confirms what the Guardian is reporting. At this point, I feel I can provide some advice for keeping secure against such an adversary. The primary way the NSA eavesdrops on internet communications is in the network. That's where their capabilities best scale.

Leveraging its secret agreements with telecommunications companies – all the US and UK ones, and many other "partners" around the world – the NSA gets access to the communications trunks that move internet traffic. 1) Hide in the network.

Related:  Informatique   -  XKeyscore: NSA tool collects 'nearly everything a user does on the internet'   -  NSA surveillance: how to stay secure   -  Education   -  Enterprise