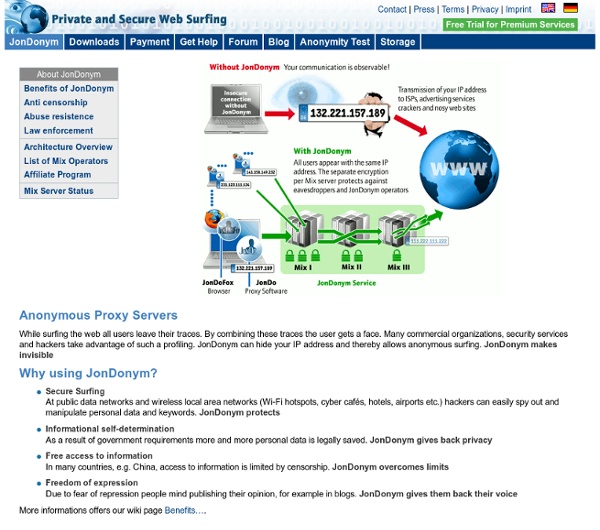 100% Free PPTP and OpenVPN Service Free PPTP VPN $0/mo PPTP (point to point tunneling) is widely used since it is supported across all Microsoft Windows, Linux, Apple, Mobile and PS3 platforms. It is however easier to block and might not work if your ISP or government blocks the protocol. HP Pavilion G7 how to access BIOS - HP Support Forum - 3396397 amazing that ever since the beginning of time all computers... hp included... had access to the bios on the startup screen Tor Browser Bundle Download the file above, and save it somewhere, then double click on it. (1) Click "Run" then choose the installer's language and click OK (2). Make sure you have at least 80MB of free disk space in the location you select. If you want to leave the bundle on the computer, saving it to the Desktop is a good choice.

Glasnost: Test if your ISP is shaping your traffic The goal of the Glasnost project is to make ISPs' traffic shaping policies transparent to their customers. To this end, we designed Glasnost tests that enable you to check whether traffic from your applications is being rate-limited (i.e., throttled) or blocked. Glasnost tests work by measuring and comparing the performance of different application flows between your host and our measurement servers. The tests can detect traffic shaping in both upstream and downstream directions separately. The tests can also detect whether application flows are shaped based on their port numbers or their packets' payload.

Smashwords — Smashwords Style Guide — A book by Mark Coker Also in Series: Smashwords Guides Also in Series: Smashwords Style Guide Translations Readers of This Book Also Read Review by: Lisa Powell on Jan. 17, 2016 : Using the bookmark method: I often go back to the style guide to refresh my memory on certain things. Download - I2P Dependency Java Runtime 1.6 or higher. (Oracle Java Version 7, OpenJDK 7, or IcedTea7 recommended, except Raspberry Pi: JDK 8 for ARM, PowerPC: IBM SDK 7) Determine your installed Java version here or type java -version at your command prompt. Clean installs 186bbe30a37802b6201fe129516e2d9515925cfc60e2f68645eb6413ec172953 Download that file and run it. 99 Resources to Research & Mine the Invisible Web College researchers often need more than Google and Wikipedia to get the job done. To find what you're looking for, it may be necessary to tap into the invisible web, the sites that don't get indexed by broad search engines. The following resources were designed to help you do just that, offering specialized search engines, directories, and more places to find the complex and obscure.

Have you ever made a phone call, sent an email, or, you know, used the internet? Of course you have! Chances are, at some point, your communications were swept up by the U.S. National Security Agency's mass surveillance program and passed on to Britain's intelligence agency GCHQ. Because of our recent victory against GCHQ in court, now anyone in the world — yes, ANYONE, including you — can try to find out if GCHQ illegally had access to information about you from the NSA. Make your claim using one of the options below, and send it to the Investigatory Powers Tribunal (IPT) to try and find out if GCHQ illegally spied on you. Top 5 Websites To Learn How To Hack Like A Pro You might be surprised to learn just how many people want to learn how to hack. The stereotype is that of the young college guy – a computer science major for sure – who spends his evenings and weekends writing up intricate hacking scripts to break into whatever computer system he can get his hands on. The truth is that what was once a male-dominated community is fast changing into one that includes folks – men and women – from many walks of life, from many countries and with many backgrounds. A recent CNET article about DEFCON makes note of the fact that claims of sexual harassment and unwanted advances are increasing.

PROTECT IP Act Breaks the Internet I am writing to you as a voter in your district. I urge you to vote "no" on cloture for S. 968, the PROTECT IP Act, on Jan. 24th. The PROTECT IP Act is dangerous, ineffective, and short-sighted. It does not deserve floor consideration. RaiderSec: How Browsers Store Your Passwords (and Why You Shouldn't Let The In a previous post, I introduced a Twitter bot called dumpmon which monitors paste sites for account dumps, configuration files, and other information. Since then, I've been monitoring the information that is detected. While you can expect a follow-up post with more dumpmon-filled data soon, this post is about how browsers store passwords. I mention dumpmon because I have started to run across quite a few pastes like this that appear to be credential logs from malware on infected computers. It got me thinking - I've always considered it best to not have browsers store passwords directly, but why? How easy can it be for malware to pull these passwords off of infected computers?

Best Free Anonymous Surfing Services Read this article in Spanish (Español) Introduction This is the 21st century, the so-called Digital Age, an age where information is more public than it is private. The sheer growth and pervasiveness of the Internet have led to additional concerns over privacy issues for a great number of people. As we are entitled to our privacy in the physical world, why not so in the virtual one too? There are a lot of genuine reasons for why many persons wish to stay anonymous on the Internet, reasons ranging from simple precaution over personal issues, to more extreme behavior such as hiding browsing activities from a spouse and averting coercive authority.