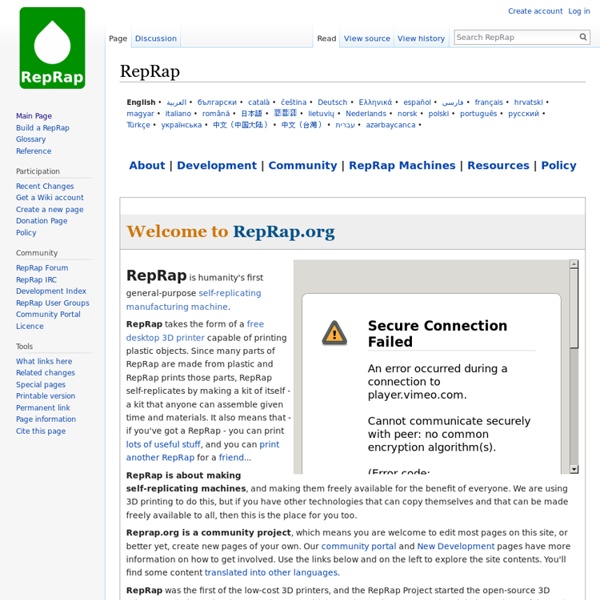 Bukobot 3D Printer - Affordable 3D with No Compromises! by Diego Porqueras Affordable Desktop 3D Object Printing for EveryoneGreat First Printer..or Second..or Third! Easy to BuildEasy to Expand or UpgradeHigh Quality ComponentsFaster than most printersDual Extruder OptionGreat DocumentationOpen Source Environmentally Friendly Options You can create almost anything you can dream up with a Bukobot 3D printer, right on your desk! The Buko framework is the next generation of Open Source 3D Printers. 3D printers using this new framework are called Bukobots. With many months in development, I have combined the best ideas from the open source community and some new ideas of my own into an extremely flexible open source 3D printer design. Following the traditions of “Reprap” 3D printers, the new Buko framework design is self-replicating and does not require any special machining for it’s major parts.

Replicator 2 Extruder Upgrade by whpthomas Print and source parts, disassemble extruder, upgrade and reassemble, enjoy life 3D printing. Now that the Replicator 2 ships with an injection moulded version of this extruder upgrade, much of what I have stated below is moot. I hope the current crop of the Replicator 2 owners run into less problems than we early adopters experienced. I have come to the considered view that the design of the Delrin plunger drive arrangement on the MakerBot Replicator 2 is defective. It uses a grub screw seated on a rubber O-ring to provide pressure on the filament to keep it in contact with the drive gear (see picture). The problem with using a rubber elastomer as a spring is that it will tend to seat-in over time, loosing some of its 'springiness' and requiring adjustment.

Interactive Fabrication » Fabricate Yourself Fabricate Yourself is a project that documented the Tangible, Embedded and Embodied Interaction Conference. Usually we think of documentation in terms of text, photography and video, but given the tangible theme of the conference we decided to engage the community by capturing and fabricating small 3D models of attendees. This enabled us to build a tangible model of the event and fabricate it piece by piece during the conference. Attendees firstly capture their favorite pose using a Microsoft Kinect. The depth image from the Kinect is processed into a mesh and displayed onscreen in real-time. At any time they can capture the mesh and save it as an STL file.

Calibration This page has been flagged as containing duplicate material that RepRapSoftwareTweakingManual also attempts to cover.These pages should be merged such that both pages do not attempt to cover the duplicate topics. ANNOUNCEMENT: If you search for the latest up-to-date guide please take a look at Triffid's Guide. Calibration is the collection of mechanical "tweaking" processes needed to get exact, quality prints. While your RepRap machine may be working as far as the electronics are concerned, calibration is necessary to have well printed parts.

Melzi Melzi Release status: working Introduction A compact all-in-one controller board for RepRaps with one extruder head, optimized for mass production. The point of RepRap is to make itself, of course. But sometimes people just want plug-and-play RepRap electronics so they can concentrate on the other aspects of the machine, or just because they are more software or mechanics oriented than electronics oriented.

Marcus Thymark's Open-Source FilaMaker Shreds and Recycles Plastic for 3D Printing German engineer and inventor Marcus Thymark is developing a filament-producing machine that allows 3D printing enthusiasts to grind up and reprocess discarded printed objects and other scrap plastic for re-use. Called the FilaMaker, Thymark’s machine is based on a powerful hand-cranked shredder that can be made from steel or stainless steel. He is working on integrating the shredder with a melter and extruder, which will allow the user to recycle scrap plastic into new filament. Thymark says the FilaMaker can handle different kinds of plastic, such as acrylonitrile butadiene styrene (ABS), polyethylene (PE), and polypropylene (PP).

Jonathan Keep, digital 3D ceramic printing journal I have been approached by Gilles Retsin who teaches one of the clusters on the MArch program at Bartlett School of Architecture, UCL to help and advise with attaching a clay extruder to an industrial robot arm. A project I have wanted to do for over a year as I see the use of a robot arm rather than a 3D printer as the way to scale up the computer generated work I am doing to the size of the floor pots I have made previously. The aim of the MArch research cluster is to explore the latest approaches to robotics and computational generative design, using advanced algorithms and extensive material experimentation. With an increase in the possibilities of digital and computer-controlled fabrication architects can design for infinite resolution and density of information. However there is a lack of design methodology to harness this potential and this course concentrates on speculative research into practical ways of using this technology. TOP: Clay extrusion tests.

Pocket Factory - About In the last several years, 3D printers have become exponentially cheaper and more capable. As these printers become more accessible and ubiquitous, they increasingly answer the question, “How will you make it?” We know how we’ll make things in the future: we’ll press ‘print’. Scorching the 3dp Earth This is an important time in the development of 3d printing. We have just cleared nearly two decades of the fundamental MIT patents on 3d printing using powders, and although there is a tangle of improvement patents on particular forms of 3dp technology, we have some hope of opening up development activities from its university-created, monopolistic roots. Recently Michael Weinberg at Public Knowledge published an important essay on the prospect of intellectual property issues slowing the development of 3d printing. Public Knowledge has spent a great deal of time dealing with digital copyright issues. Weinberg worries that manufacturers will sue 3d print users for making copies of their products, or replacement parts. This activity is said to be in the public interest.

Pearce Research Group If we start in the schools - would children learn more and faster if they were encouraged to flex their own creativity? MOST 3-D Printer High School Teacher Workshop What if open-source 3-D printers could make common products less expensively than a sweat-shop? Cheaper than the dollar store with better than Nordstrom quality and customized just for you? Massive ROI with Distributed Manufacturing Books 83-Year-Old Inventor Designs Inexpensive Open-Source Filament Extruder to Cut the Cost of 3D Printing Hugh Lyman, an 83-year-old retiree from Enumclaw, Washington, won The Desktop Factory Competition with his design for a low-cost, open-source machine capable of turning resin pellets into inexpensive filament for 3D printing. The competition, sponsored by Inventables, Kauffman, and the Maker Education Initiative, required that the parts used to make the machine could cost no more than $250. Lyman first entered his proposal in August 2012, but was disqualified because the machine exceeded the budget of $250. After modifying the project, he resubmitted it under the name “The Lyman Filament Extruder II”. This time the machine’s design met the budget restriction and was able to extrude different filament diameters, saving up to 80 percent on material costs.