Preparations on how to build a delta 3d printer such as Rostock or Kossel. Schematics and shops. 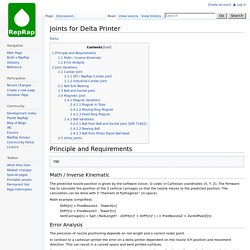 The firmware has to calculate the position of the 3 vertical carriages so that the nozzle moves to the predicted position. Delta robot kinematics - Tutorials. The delta robot consists of two platforms: the upper one (1) with three motors (3) mounted on it, and smaller one (8) with an end effector (9). 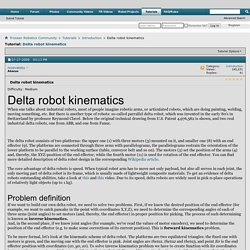 The platforms are connected through three arms with parallelograms, the parallelograms restrain the orientation of the lower platform to be parallel to the working surface (table, conveyor belt and so on). The motors (3) set the position of the arms (4) and, thereby, the XYZ-position of the end effector, while the fourth motor (11) is used for rotation of the end effector. You can find more detailed description of delta robot design in the corresponding Wikipedia article. The core advantage of delta robots is speed. When typical robot arm has to move not only payload, but also all servos in each joint, the only moving part of delta robot is its frame, which is usually made of lightweight composite materials. To be more formal, let's look at the kinematic scheme of delta robot. Below you can find corresponding equations and the YZ plane view: First tests and Calibration - Repetier Firmware. I originally wrote this post, and geared it toward the firmware I was using at the time, Marlin. 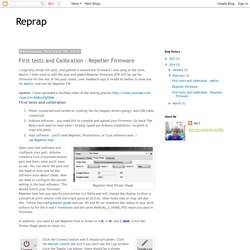 I then tried to edit the post and added Repetier firmware (FW will be use for firmware for the rest of the post) notes. User feedback says it would be better to have one for , and one for Repetier FW. Open your host software and configure your port. Arduino creates a com (communications) port and that's what you'll want to use. Bouwverslag van de Hephaestus Rostock 3D printer - Deel 2 - FiXeL's blogje - Tweakblogs - Tweakers. Michiels Blog - Tweakers. Bouwverslag van de Hephaestus Rostock 3D printer - FiXeL's blogje - Tweakblogs - Tweakers. Door FiXeL op zondag 22 september 2013 13:49 - Reacties (4)Categorie: -, Views: 5.782 Een woord vooraf. 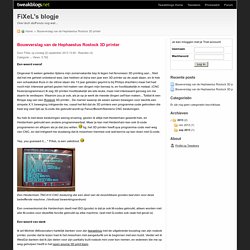 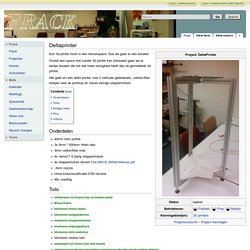 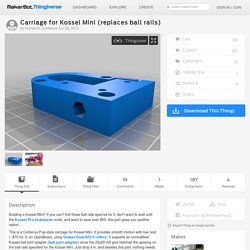 The list is fairly long, but aside from printing, getting these rolling won't take much time. Print at low-to-moderate infill. 30% with 3 perimeters is plenty rigid for me, but you could always go higher. I've done 0.4mm layers with a 0.5mm nozzle with good results. Deltabot Google group post with more info and pictures. OpenSCAD source and latest mods are available on the GitHub repo. Helium Frog Delta Robot. This page is a development stub. 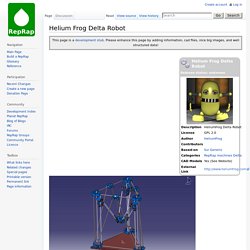 Please enhance this page by adding information, cad files, nice big images, and well structured data! Helium Frog Delta Robot Release status: unknown Introduction The Helium Frog Delta Robot is being developed to examine the possibility of a self replicating delta style robot. Initially the robot will be equiped with a pen holder or similar to measure the accuracy and in further developments an extruder will be added. 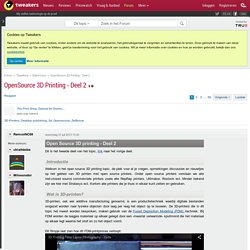 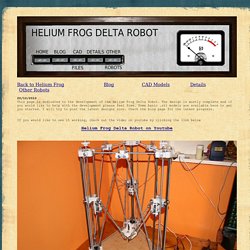 The design is mostly complete and if you would like to help with the development please feel free. Some basic .stl models are available here to get you started. I will try to post the latest designs soon. Check the blog page for the latest progress. If you would like to see it working, check out the video on youtube by clicking the link below. E3D-v6. V6 Video Check our our short and informative video introducing you to V6. 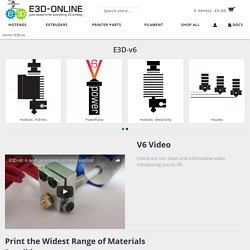 Print the Widest Range of Materials Possible. Building on our signature high temperature performance that allows you to print high temperature materials we've now focussed on adding increased functionality with soft and flexible filaments. By providing a PTFE liner tube through the hotend that you can extend into your extruder this gives the ability to add the confinement and constraint needed to make excellent quality prints with flexible filaments like NinjaFlex, FlexPLA and FlexPolyester. This opens up a huge range of new opportunities for your printer. Airtripper Bowden Extruder BSP Edition by Airtripper. Full documentation for the extruder is here: Extruder Filament Drive Gear Review & Benchmark Airtripper Direct Drive Bowden Extruder BSP Edition Designed for 1.75mm Filament and Nema 17 Stepper Motor This is the latest edition of the airtripper extruder series with many improvement tweaks and now is sporting a BSP fitting filament out feed socket.

3D Printing with Delta Printers. Rostock Delta 3D printer build. Rostock ! Hello and welcome to the Rostock build, it's take a while to get this one documented, I blame that on having way too much fun with my printers and development at the moment, I'll try to be a little quicker on future projects. The Rostock 3D printer was originally developed by Johann C. Rocholl and is now quite well established in RepRap terms, it's over a year old and has had many different spin-off's and variants by other users and developers. Even Johann has a new design (Kossel Wiki here) based on the openbeam Aluminium construction.I rather liked the simplicity of the original design, and while I thought about making an aluminium T-slot design around the time SeeMeCNC were doing their very impressive development, I settled on just a few small changes for my Rostock build.

The Rostock has a Delta configuration (Stewart platform) rather than the more common Cartesian coordinate system used by most other RepRap's. They should be tight and still rotate freely, but not spin. Rostock. Rostock Release status: working Rostock is a linear delta robot 3D printer prototype, built in 2012 by Johann in Seattle, USA. Several variations have taken root, including: Kossel, Rostock mini, Rostock MAX, Rostock-Montpellier, Rostock Prisma, Delta-Pi, Cerberus, cOssel, Cherry Pi and ProStock. Both the MOST delta and their Open Source Metal 3D Printer also uses an inverted form of this design. Design Goals Build volume: 200x200x400 mm (8x8x16 inches).