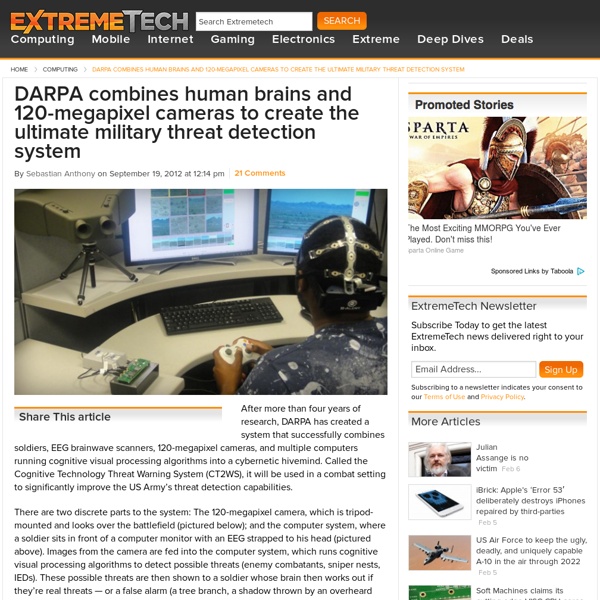 After more than four years of research, DARPA has created a system that successfully combines soldiers, EEG brainwave scanners, 120-megapixel cameras, and multiple computers running cognitive visual processing algorithms into a cybernetic hivemind. Called the Cognitive Technology Threat Warning System (CT2WS), it will be used in a combat setting to significantly improve the US Army’s threat detection capabilities. There are two discrete parts to the system: The 120-megapixel camera, which is tripod-mounted and looks over the battlefield (pictured below); and the computer system, where a soldier sits in front of a computer monitor with an EEG strapped to his head (pictured above). Images from the camera are fed into the computer system, which runs cognitive visual processing algorithms to detect possible threats (enemy combatants, sniper nests, IEDs). In short, CT2WS taps the human brain’s unsurpassed ability to recognize objects. Now read: Changing the world: DARPA’s top inventions

Amazing video shows us the actual movies that play inside our mind Upon rereading the entire article it does appear that the second clip shown to the subjects was fully reconstructed by what was learned from the brain in the first mapping session. That is fucking incredible. Agreed. That's just so incredible. The future of brain-computer interfaces revealed You may already be having basic conversations with your smartphone, desktop PC, games console, TV and, soon, your car, but such voice recognition is – in the scientific community, at least – firmly in a folder market 'dumb' technology. New ways of controlling consumer electronics goods with both basic voice and gestures are suddenly common, but we could soon be operating computers not by barking out instructions or waving, but purely by thinking. Research into the long researched brain-computer interface (BCI) – also known as the 'mind-machine' interface – is becoming so advanced that it's set to create a whole new symbiotic relationship between man and machine. It could even lead to a situation where speech is rendered useless, and people wirelessly communicate through universal translator chips. No more complaining about loud music in nightclubs, then. Forget about the wireless revolution – this revolutionary tech demands cables.

Fluorescent protein lets us read a fish's thoughts - life - 31 January 2013 Video: Glowing protein lets us see into a fish's brain The zebrafish spots its lunch. What goes through its brain? Now, for the first time, we can see exactly what it is thinking, thanks to a new way of studying single neurons that lets researchers track patterns of brain activity in a live animal. Comparison of consumer brain–computer interfaces This is a comparison of brain-computer interface devices available on the consumer market. Comparison[edit] Open-source projects[edit] Quadrotor Unlike most helicopters, quadcopters use 2 sets of identical fixed pitched propellers; 2 clockwise (CW) and 2 counter-clockwise (CCW). These use variation of RPM to control lift and torque. Control of vehicle motion is achieved by altering the rotation rate of one or more rotor discs, thereby changing its torque load and thrust/lift characteristics.[citation needed] Early in the history of flight, quadcopter (referred to as 'quadrotor') configurations were seen as possible solutions to some of the persistent problems in vertical flight; torque-induced control issues (as well as efficiency issues originating from the tail rotor, which generates no useful lift) can be eliminated by counter-rotation and the relatively short blades are much easier to construct.

Google Glass - will we love it or hate it? 5 May 2013Last updated at 20:16 ET By Jane Wakefield Technology reporter The glasses have a small camera and display built in Google's smart glasses project has been causing excitement in the tech world for months as speculation about what it will finally look like and be able to do reaches fever pitch. Prototype devices are being tested by around 1,000 so-called Glass Explorers and are expected to go on sale to the public next year. Martin Jetpack The Martin Jetpack is an experimental aircraft. Though its tradename uses the phrase "jet pack," the craft uses ducted fans for lift. Martin Aircraft Company of New Zealand developed it, and they unveiled it on July 29, 2008 at the Experimental Aircraft Association's 2008 AirVenture in Oshkosh, Wisconsin, USA. The Federal Aviation Administration classifies it as an experimental ultralight airplane. It uses a gasoline (premium) engine with two ducted fans to provide lift.

First mind-reading implant gives rats telepathic power - life - 28 February 2013 Read full article Continue reading page |1|2 Video: Watch a pair of rats communicate by mind-reading The world's first brain-to-brain connection has given rats the power to communicate by thought alone. "Many people thought it could never happen," says Miguel Nicolelis at Duke University in Durham, North Carolina. Technology - 3D printing powered by thought Imagine if you could print objects just by thinking about them. Camila Ruz visits one company to see whether this is far-fetched dream or a real possibility. It’s definitely not a bird.

Alpinestars Tech Air Race Suit Alpinestars Tech Air Race Suit Jeff Harris The Alpinestars suit can reduce the impact of a motorcycle crash to one tenth of what a racer wearing conventional body armor would suffer. The suit continuously monitors the rider's movements using embedded sensors, which communicate with a computer programmed to differentiate the motion that immediately precedes a crash from normal motion. When the system determines that a crash is imminent, it deploys airbags along the shoulders and collarbone in milliseconds to soften the blow. $8,000 (est.) Mental picture of others can be seen using fMRI, finds new study It is possible to tell who a person is thinking about by analyzing images of his or her brain. Our mental models of people produce unique patterns of brain activation, which can be detected using advanced imaging techniques according to a study by Cornell University neuroscientist Nathan Spreng and his colleagues. “When we looked at our data, we were shocked that we could successfully decode who our participants were thinking about based on their brain activity,” said Spreng, assistant professor of human development in Cornell’s College of Human Ecology.