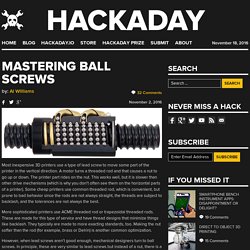 A motor turns a threaded rod and that causes a nut to go up or down. The printer part rides on the nut. This works well, but it is slower than other drive mechanisms (which is why you don’t often see them on the horizontal parts of a printer). Kossel Clear Delta Arm Crash Sensor by lboucher. Hi All This simple hack uses some limit switches to monitor the arms on a delta printer. 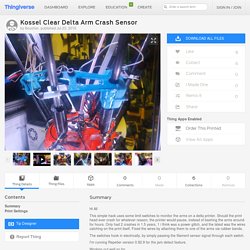 Should the print head ever crash for whatever reason, the printer would pause, instead of bashing the arms around for hours. Only had 2 crashes in 1.5 years, 1 i think was a power glitch, and the latest was the wires catching on the print itself. Fixed the wires by attaching them to one of the arms via rubber bands. The switches hook in electrically, by simply passing the filament sensor signal through each switch. Sonic 3D Printer Auto Bed Leveling Makes a Swoosh. 3D Printering: the final frontier. 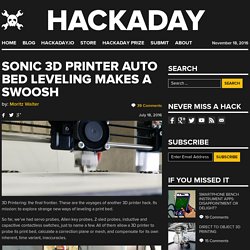 These are the voyages of another 3D printer hack. Its mission: to explore strange new ways of leveling a print bed. So far, we’ve had servo probes, Allen key probes, Z-sled probes, inductive and capacitive contactless switches, just to name a few. All of them allow a 3D printer to probe its print bed, calculate a correction plane or mesh, and compensate for its own inherent, time variant, inaccuracies. 3D Printer Error Detection – Chris Barr Builds. I’ve been playing around with magnetic encoders a lot lately in the hopes of getting some sort of error-detection system up and running. 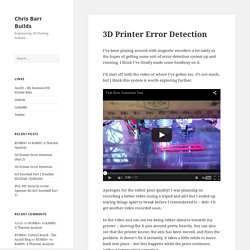 I think I’ve finally made some headway on it. I’ll start off with the video of where I’ve gotten too. Filament Width Sensor Prototype Version 3 by flipper. This is a prototype for an optical sensor that measures the width of plastic filament in real time as it goes into a 3D printer or a filament extruder. 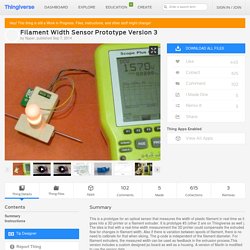 It is prototype #3 (other 2 are on Thingiverse as well ). The idea is that with a real-time width measurement the 3D printer could compensate the extruded flow for changes in filament width. Also if there is variation between spools of filament, there is no need to calibrate for that when slicing. The g-code is independent of the filament diameter. Cohesion3D. New Part Day: Smoothie For RAMPS. When it comes to 3D printer controllers, there are two main schools of thought. 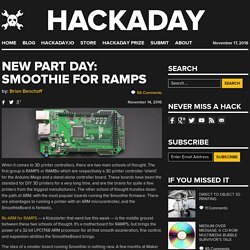 The first group is RAMPS or RAMBo which are respectively a 3D printer controller ‘shield’ for the Arduino Mega and a stand-alone controller board. These boards have been the standard for DIY 3D printers for a very long time, and are the brains for quite a few printers from the biggest manufacturers. The other school of thought trundles down the path of ARM, with the most popular boards running the Smoothie firmware. There are advantages to running a printer with an ARM microcontroller, and the SmoothieBoard is fantastic. New Part Day: Smoothie For RAMPS. Re-ARM for RAMPS, simple 32-bit upgrade by Roy Cortes. Kickstarter Collections Projects We Love Saved Trending. 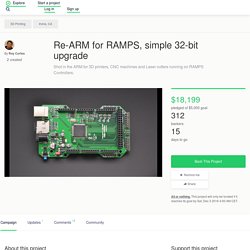 Smoothie Project. Impressions: Duet vs. Smoothie - Welcome to the SeeMeCNC Forum. This is a comparison between the Smoothieboard and the Duet 0.8.5. 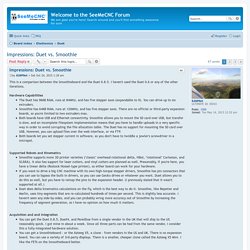 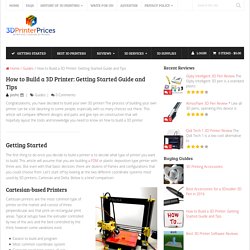 The process of building your own printer can be a bit daunting to some people, especially with so many choices out there. This article will compare different designs and parts and give tips on construction that will hopefully layout the tools and knowledge you need to know on how to build a 3D printer. Getting Started. 3D printer nozzle diameter comparison: 0.4mm vs. 0.35mm vs. many others. Owning 3D printers with different nozzle diameters, I am able to give some first-hand experience on their advantage and disadvantage. 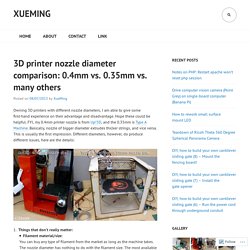 Hope these could be helpful. FYI, my 0.4mm printer nozzle is from Up! TweakTown's Guide to 3D Printing: Part 1 - What makes up a 3D Printer? 3D printing is all the rage at the moment. The ability to design or download an object and watch it form in front of your eyes is a very appealing thing to a lot of people. Up until a few years ago, printing physical objects in the third dimension was something that was just out of reach for the average consumer, with entry-level commercial machines costing tens of thousands of dollars.

Inductive Proximity Sensor Switch NPN DC6-36V – RepRap Champion. 3D Printer Parts. Eventorbot! Open source DIY 3D printer. Free plans - All. Eventorbot! Open source 3D printer. Simple with less materials. Frame is made of a single 4' long, 2 1/2" square tube (16 gauge/1.5mm/.0598" thick, cost: less then $20.00). How to Build a 3D Printer From Scratch. If you are reading this article that means that you’ve probably decided to join the community of 3d printing enthusiasts and find out more about 3d printers, or maybe you have already got some experience in it and are ready to try to create your own 3d printer from scratch. In this article you will find general understanding how 3D printers can be built as well as links to really useful resources where you can find more detailed information with step-by-step description. Currently there is a big variety of 3d printers in the Internet that already assembled and are ready to print right after you unpack them from a box, of course you also need to buy a 3d printer filament for it.

Do not forget that not all 3d printers can use the same filament types, so please read the instruction before you purchase it. But for some people who love to make something new with their own hands can be more interesting to build their own 3d printer from scratch. Advice for a newcomer, Prusa vs. MendelMax : Reprap.

Some custom 3D printer boards integrate the Arduino’s functions with the related items typically found on a 3D printing “shield” that attaches to the basic format. The best of these boards are: RAMPS (RepRap Arduino Mega Pololu Shield): This is the original Arduino shield designed for multiple stepper motor control and for management of the extruder and built plate heaters. SainSmart 3D Printer Control Board Ramps 1.4 For Arduino Reprap Mendel Prusa 3D Printing, Arduino, Robotics. Document Document: RAMP1.4.rar Please visit our wiki page for more info about this product. It will be appreciated if you can help us improve the documents, add more demo code or tutorials. For technical support, please post your questions to our forum. SainSmart RAMPS 1.4+Mega 2560 R3+A4988+Opto Endstop Switch 3D Printer Kit 3D Printing, Arduino, Robotics. RepRap Ramps: Gadgets & Other Electronics.