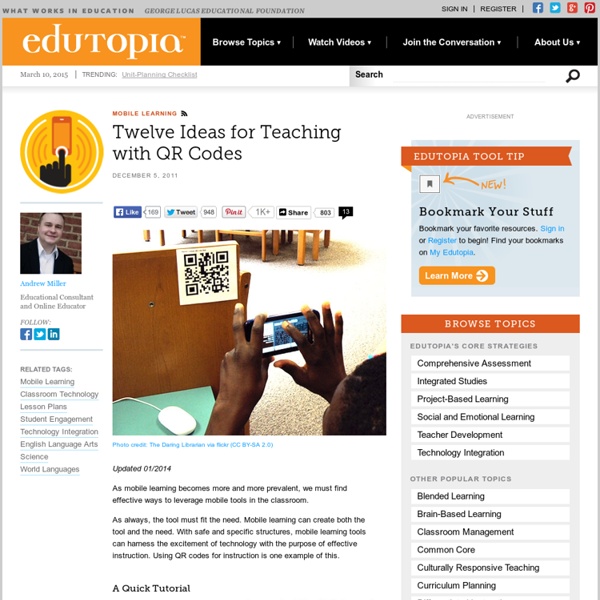 Updated 01/2014 As mobile learning becomes more and more prevalent, we must find effective ways to leverage mobile tools in the classroom. As always, the tool must fit the need. Mobile learning can create both the tool and the need. With safe and specific structures, mobile learning tools can harness the excitement of technology with the purpose of effective instruction. Using QR codes for instruction is one example of this. A Quick Tutorial QR stands for Quick Response. 1. Have students use QR to create resumes that link to other content such as their professional website or portfolio. 2. You can create QR for linking students to examples of quality work, whether it's PowerPoint or slideshare for a class presentation, or people speaking a foreign language specific to your current lesson. 3. Integrate QR with a PBL or Service Learning project where students can create the codes that will link to the content they create. 4. Save a few trees! 5. 6. 7. 8. 9. 10. 11. 12.

Using QR Codes in the Classroom Whoever said that iPads or tablets would be the game-changers this school year obviously overlooked a trend that has been crossing my social media streams, art museum exhibits, food and products. It seems that no matter where I look I see QR codes being used. I even bought a banana a few weeks ago that had a QR code on the sticker that pointed to the farm where it was grown! So what is a QR code? It's short for "Quick Response" and it is (usually) in the shape of a square. It looks like a bar code with black splotches instead of lines.

QR Code Easter Egg Hunt photo © 2008 Mallory Odam | more info (via: Wylio)This week I created a QR code Easter Egg Hunt for my sixth grade students. I wanted to share this early enough for others to have time to do something similar if they wanted even though the students will not come in for a few more days. This activity could be adapted for any subject but we are doing the activity in English/Language Arts.

QR Codes Improve Web Access In the last week I have finally had the opportunity to use Quick Response (QR) codes in my classroom. I have found them simple, straightforward and very effective in improving access to digital resources. I have been thinking about ideas to use QR codes in the classroom for a long while and many colleagues have joined me in contributing to a shared “Interesting Ways” resource. It outlines many useful and innovative ways to utilise the QR codes in the classroom and around school.

Web research on the iPad using Evernote and Skitch (how-to) My work involves frequent research on the web, and I am doing more of that on the iPad than ever before. This is mainly due to two apps that make capturing information as easy as tapping on the screen. The two apps, Evernote and Skitch, work well together since both of them are now produced by the Evernote Corp. I have previously detailed how I use Evernote to write long articles on the iPad, a method that still serves me well. Since Evernote is the home for my notebooks in the cloud, it is fitting to also use Evernote in the research phase of my writing projects. It is worth mentioning that both Skitch and Evernote work as well on the Android platform.

- Top 100 Sites of 2011 0 Comments November 23, 2011 By: David Kapuler Nov 23 Exploring The Educational Potential of QR Codes QR Codes (or Quick Response Codes, to give them their full title) are two-dimensional bar codes which when scanned with the camera of a mobile device such as an iPad, Android tablet or smartphone can transfer web links, text and email addresses amongst other digital content quickly and easily to users. Popular with advertisers and marketing companies, QR Codes give readers an immediate opportunity to visit a website to find out more information about a range of facts, products and services. For schools that have invested in iPads or tablets as learning tools or allow their students to bring in their own devices (BYOD), QR Codes have proven to be a great timesaver for sharing links and distributing information en masse. Projecting large QR Codes on a screen so they can be scanned from around the class makes it easy for students to access the same content on their own devices and interact with it individually instead of passively looking at the interactive whiteboard. About the Author

QR Codes – Lesson and Resources In response to recent interest in Quick Response codes I have created some lesson resources to introduce students to QR codes and provide them with some practical experience. The lesson also introduces students to blogging (Digital Learning World) and URL shortening (Bit.Ly and Goo.gl). Students are also encouraged to collaborate by recording their findings in a shared Google document. These resources are intended for Secondary students from Year 7 upwards. Students will need a PC/Laptop with a web cam and access to the Internet.

How to Use QR Codes in Student Projects Scannable bar codes may be just what you need to spark some student interest in your classroom - read on to learn how to use them to showcase your student work and give some life to your classroom's infographics. Last April ago I took a trip to Tokyo, Japan. One thing that really stood out to me there was the abundance of these scannable barcodes.