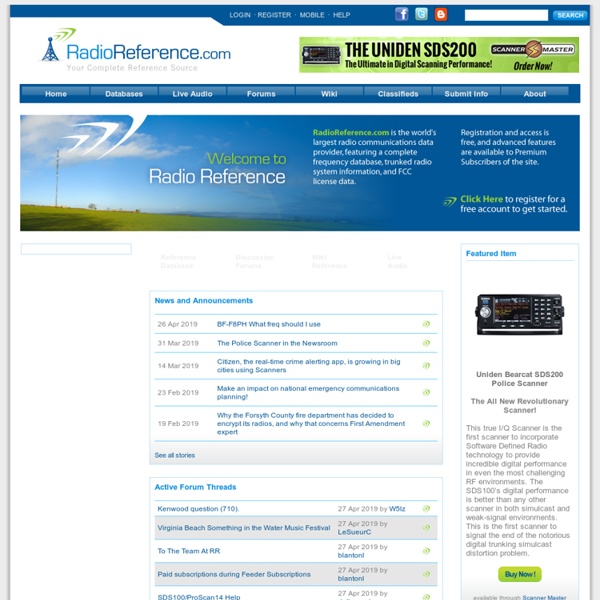 NOVA Can Wind Turbines Make You Sick? Residents living in the shadows of wind turbines say the sound is making them sick. But so far the science isn't there. From NOVA Next | Jun 27, 2018 Ed Tyll - TALKERS.COM Tom Leykis’ Return to Talk Draws Loyal Audience to Web-Based Content. Off the radio for more than three years after CBS Radio blew up KLSX-FM, Los Angeles and his contract kept him from working for anyone other than CBS, Tom Leykis returned to the microphone on April 2 for an internet-delivered talk show. The show is broadcast live at www.blowmeuptom.com at 3:00 pm PT and on a 24/7 streamed replay via major media players – Tune In, Windows Media Player, iTunes, iPhone, Shoutcast and Winamp. Leykis says the numbers for the first week of the show were impressive: The total number of listeners from April 2 to Monday, April 9 was 401,180.

Edison's Files Reveal the Only Known Voice Recording of Someone Born in the 18th Century - Rebecca J. Rosen - Technology Many of the most significant moments of the 20th century are written in our brains not as naked text but as audio files. Who can think of Neil Armstrong words upon moon landing or Kennedy's exhortation to ask what we can do for our country without hearing the crackly recordings of their voices? Who can look at pictures of Nazi rallies without hearing the clipped German of Hitler? The soundtrack of history goes silent sometime in the late 19th century. We have no sound to attach to the great figures of those earlier times. But one voice thought lost has now been recovered, officials at the Thomas Edison Historical Park told the The New York Times yesterday.

Dancing under socialism: rare electronic music from Yugoslavia (Part One) We bring you some of the most extraordinary Yugoslav electronic gems recently rediscovered through a bunch of existing and upcoming compilation releases in Europe and the US. Read the part two here Illustration by Blanka Boskov How to Remove Trovi / Conduit / Search Protect Browser Hijack Malware If your computer has been hijacked with an obnoxious malware that won’t let you change your home page, there’s a strong chance you’ve been infected with the Trovi Search Protect malware, which used to be known as Conduit. Here’s how to remove it. How do you know this is malware? Instead of installing like it should, as a Google Chrome Extension, you’ll probably see that your extensions list doesn’t mention Trovi or Conduit at all. Instead, they are hijacking the browser process using Windows API techniques that no legitimate application should be using. For more details on that, you can read our series on using Process Explorer to troubleshoot Windows.

We're sorry..., Social Security You must be able to verify some information about yourself and: Have a valid email address; Have a Social Security number; Have a U.S. mailing address; and Be at least 18 years of age. You can only create an account using your own personal information and for your own exclusive use. You cannot create an account on behalf of another person or using another person's information or identity, even if you have that person's written permission. For example, you cannot create an account for another person: With whom you have a business relationship; For whom you are a representative payee; or For whom you are an appointed representative. Earn points for savings on gift cards, name-brand merchandise and more with Rewards for Good SWEEPSTAKES RULES: NO PURCHASE NECESSARY. PURCHASE WILL NOT INCREASE YOUR CHANCES OF WINNING. Open to AARP account holders who are enrolled in the Rewards for Good Program, who are 50 U.S.