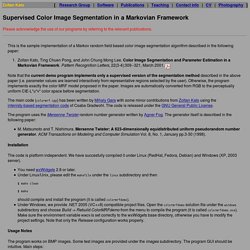 Color Image Segmentation and Parameter Estimation in a Markovian Framework. Pattern Recognition Letters, 22(3-4):309--321, March 2001. Note that the current demo program implements only a supervised version of the segmentation method described in the above paper (i.e. parameter values are learned interactively from representative regions selected by the user). Otherwise, the program implements exactly the color MRF model proposed in the paper.

The main code (colormrf.cpp) has been written by Mihaly Gara with some minor contributions from Zoltan Kato using the intenisty-based segmentation code of Csaba Gradwohl. The program uses the Mersenne Twister random number generator written by Agner Fog. M. Installation The code is platform independent. You need wxWidgets 2.8 or later. Usage Notes Download. IbyL: Inference by Learning. I will present this work at the NIPS conference in Montreal, CA, during the morning poster session of Tuesday, December 9, 2014. 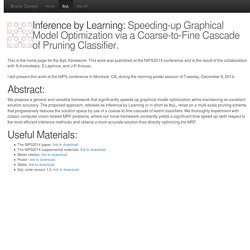 Abstract: We propose a general and versatile framework that significantly speeds-up graphical model optimization while maintaining an excellent solution accuracy. The proposed approach, refereed as Inference by Learning or in short as IbyL, relies on a multi-scale pruning scheme that progressively reduces the solution space by use of a coarse-to-fine cascade of learnt classifiers. We thoroughly experiment with classic computer vision related MRF problems, where our novel framework constantly yields a significant time speed-up (with respect to the most efficient inference methods) and obtains a more accurate solution than directly optimizing the MRF.

Software. An implementation of the "MP-BCFW" algorithm described in A Multi-Plane Block-Coordinate Frank-Wolfe Algorithm for Training Structural SVMs with a Costly max-Oracle. 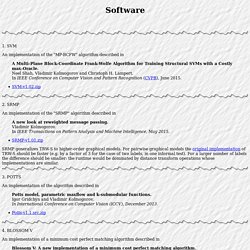 The first version, corresponding to our ECCV 06 paper, is still available here. Computer Vision at Western - Max-flow problem instances in vision. Kz-pami04.pdf. ICCV07 Tutorial on Discrete Optimization. Nikos Komodakis, Philip Torr, Vladimir Kolmogorov, Yuri Boykov A wide variety of tasks in computer vision and pattern recognition involve assigning a label (from a discrete set of labels) to each element in a given set of objects. 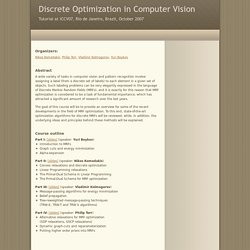 Such labeling problems can be very elegantly expressed in the language of Discrete Markov Random Fields (MRFs), and it is exactly for this reason that MRF optimization is considered to be a task of fundamental importance, which has attracted a significant amount of research over the last years. The goal of this course will be to provide an overview for some of the recent developments in the field of MRF optimization. To this end, state-of-the-art optimization algorithms for discrete MRFs will be reviewed, while, in addition, the underlying ideas and principles behind these methods will be explained.

Probabilistic Graphical Models - Markov Random Field. Skip to main content Get your brand new Wikispaces Classroom now and do "back to school" in style. guest. 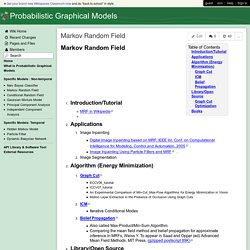 OldCode. GCoptimization Library If you use this software you have to reference ALL THREE of these papers Efficient Approximate Energy Minimization via Graph Cuts Yuri Boykov, Olga Veksler, Ramin Zabih, IEEE transactions on PAMI, vol. 20, no. 12, p. 1222-1239, November 2001. 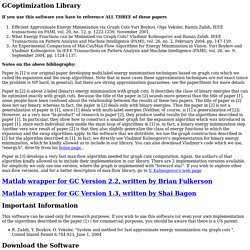 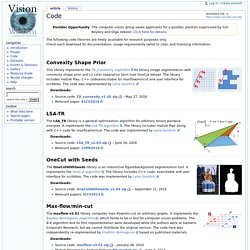 Check each download for documentation, usage requirements (what to cite), and licensing information. Convexity Shape Prior This library implements the TR_Convexity algorithm for binary image segmentation with convexity shape prior and L1 color separation term (see OneCut below). The library includes matlab files, C++ code/executable for maxflow/mincut and user interface for scribbles. The LSA_TR library is a general optimization algorithm for arbitrary binary pairwise energies. OneCut with Seeds The OneCutWithSeeds library is an interactive figure/background segmentation tool. Multi-region/cpp at master · johannesu/multi-region. Computer Vision at Western - Code. OpenGM2. OpenGM OpenGM is a C++ template library for discrete factor graph models and distributive operations on these models. 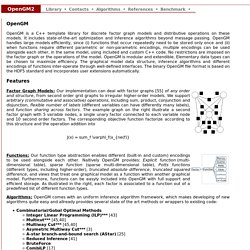 It includes state-of-the-art optimization and inference algorithms beyond message passing. OpenGM handles large models efficiently, since (i) functions that occur repeatedly need to be stored only once and (ii) when functions require different parametric or non-parametric encodings, multiple encodings can be used alongside each other, in the same model, using included and custom C++ code. No restrictions are imposed on the factor graph or the operations of the model. OpenGM is modular and extendible. Features. Yair Weiss home page. Professor School of Computer Science and Engineering The Hebrew University of Jerusalem 91904 Jerusalem, Israel email: yweiss at cs dot huji dot ac dot il phone/fax: +972-2-5494540 vita (acrobat) Research interests Human and machine vision. 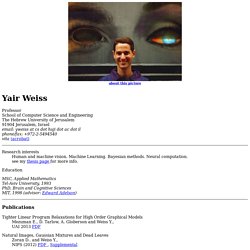