‘Saved by the Bell’ Illuminati, Satan worship, sex magick, & other conspiracy theories. 911-What Happened to the Planes and Passengers? The Cryptogram as a factor in Symbolic Philosophy. Index Previous Next p. 169 NO treatise which deals with symbolism would be complete without a section devoted to the consideration of cryptograms. 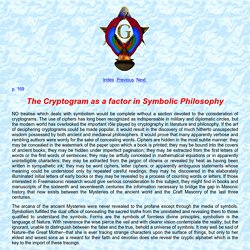 Shakespeare's Masonic Mark - Unzipped. Read not my blemishes in the world's report; I have not kept my square, but that to come Shall all be done by the rule. 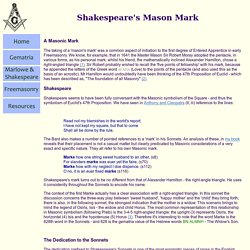 The Bard also makes a number of pointed references to a 'mark' in his Sonnets. An analysis of these, in my book reveals that their placement is not a casual matter but clearly predicated by Masonic considerations of a very exact and specific nature. They all refer to his own Masonic mark. Marke how one string sweet husband to an other, (s8) For slanders marke was euer yet the faire, (s70) Marke how with my neglect I doe dispence.

(s112) O no, it is an euer fixed marke (s116) Shakespeare's mark turns out to be no different from that of Alexander Hamilton - the right-angle triangle. Shakespeare Decoded: Bacon, Father CRC & the Templar Treasure in Nova Scotia (Part 1 of 2) One of Americas Best Kept Secrets Francis Bacon The Genius Behind William Shakespeare's Work. America Was Founded on Secrets and Lies. With all due respect to early-American hagiographer Parson Weems, George Washington knew how to tell a lie. 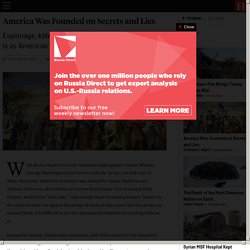 In fact, he told a lot of them. Moreover, talent for deception was shared by James Madison and Thomas Jefferson, all of whom, to borrow from former Vice President Dick Cheney, worked the “dark side.” Diasporter. First glimpse of lost library of Elizabethan polymath John Dee. Where to start with the legend and life of Dr Dee? 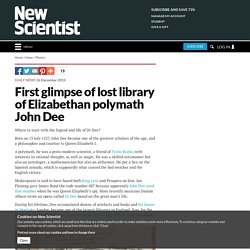 Born on 13 July 1527, John Dee became one of the greatest scholars of the age, and a philosopher and courtier to Queen Elizabeth I. A polymath, he was a proto-modern scientist, a friend of Tycho Brahe, with interests in rational thought, as well as magic. He was a skilled astronomer but also an astrologer; a mathematician but also an alchemist. Cipher in Westminster Abbey. Francis Rosicrossby Karl Hollenbach: The Shakespeare Statue in Westminster Abbey The Quotation from The Tempest as it appears in the 1623 First Folio (Act iv, Scene 1): *And like the baselesse fabricke of this vision The Clowd-capt Towres, the gorgeous Pallaces, The solemne Temples, the great Globe it selfe Yea, all which it inherit, shall dissolue And like this insubstantiall Pagent faded Leave not a racke behinde. 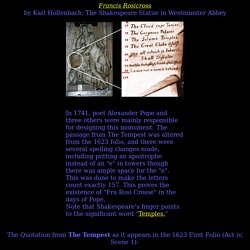 On the marble scroll of the monument: Illumination: the Secret Religion - The Bloodline Code. In our article on this website entitled The Mystery, we said the following: 'There are three profound mysteries involved in the search for the "Grail", two of which are fake and carefully designed to protect the real mystery. 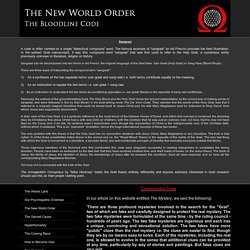 The two fake mysteries were formulated at the same time - by the ruling council - hundreds of years ago. The two fake mysteries are ingenious and each has a unique, convincing and sensational solution. The two fakes have more "public" clues than the real mystery i.e. the clues are easier to find, though they are by no means easy to solve. Illuminati 2014: Predictions!! Must Watch!! NOT for the immature! Zionist Antichrist will rule the NWO. The Shakespeare Code - More than 50 Select Bibliography. The Priory of Sion (Prieure de Sion) 13 Bloodlines of The Illuminati. Who really controls world events from behind-the-scene? 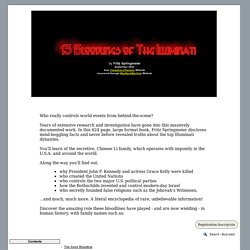 Years of extensive research and investigation have gone into this massively documented work. In this 624 page, large format book, Fritz Springmeier discloses mind-boggling facts and never before revealed truths about the top Illuminati dynasties. Priory of Sion. The Prieuré de Sion, translated from French as Priory of Sion, is a name given to multiple groups, both real and fictitious. 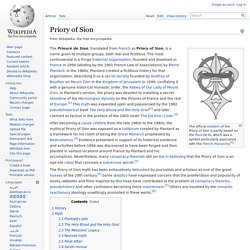 The most controversial is a fringe fraternal organisation, founded and dissolved in France in 1956 (abiding by the 1901 French Law of Associations) by Pierre Plantard. In the 1960s, Plantard created a fictitious history for that organization, describing it as a secret society founded by Godfrey of Bouillon on Mount Zion in the Kingdom of Jerusalem in 1099, conflating it with a genuine historical monastic order, the Abbey of Our Lady of Mount Zion. In Plantard's version, the priory was devoted to installing a secret bloodline of the Merovingian dynasty on the thrones of France and the rest of Europe.[2] This myth was expanded upon and popularised by the 1982 pseudohistorical book The Holy Blood and the Holy Grail[1] and later claimed as factual in the preface of the 2003 novel The Da Vinci Code.[3] History[edit] Myth[edit] Plantard's plot[edit] 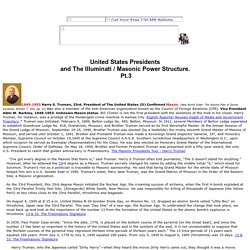 Pt.3 1945-1953 Harry S. Truman, 33rd. President of The United States (D) Confirmed Mason. Conspiracies, myths & facts. Stars Over Washington: Francis Bacon, Uranus/Neptune, and Pluto. If you like to read about America's founding, Rosicrucianism, Freemasonry, and other such mystical topics, you may be interested in a discovery I've just made of a site that has so many links and articles to check out, I'm just getting started. 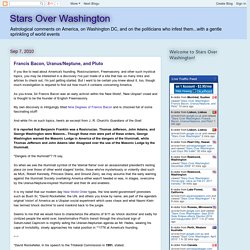 But I want to be certain you knew about it, too, though much investigation is required to find out how much it contains concerning America. As you know, Sir Francis Bacon was an early activist within the 'New World', 'New Utopian' crowd and is thought to be the founder of English Freemasonry. My own discovery is intriguingly titled Nine Degrees of Francis Bacon and is chocked full of some fascinating stuff! And while I'm on such topics, here's an excerpt from J. R. It is reported that Benjamin Franklin was a Rosicrucian. Shakespeare: the conspiracy theories - Telegraph. Edward de Vere, the 17th Earl of Oxford was also the Lord Great Chamberlain of England and a courtier poet. There is little evidence that suggests he did write them, but some believe there are references in the plays to de Vere's life and that there are a series of codes in the writing that implicate the Earl as the author.

This is the theory put forward in the film Anonymous. Sir Francis Bacon It is also thought possible that Sir Francis Bacon, writer of New Atlantis, essayist and scientist, could have penned the plays. Again there is little evidence to suggest this, apart from similarities in the plays to his own. Christopher Marlowe. Eyre International - Bringing You The News No One Else Wants To Bring You. They say “A picture paints a thousand words.”

Look deep into this picture and you will see what the New World Order is all about – False Flags – Natural Resources & Money – Chip and Pin for everyone – Mass depopulation by whatever means including WMD’s (depleted urnnium), Vaccinations (HPV, Swine Flu and other toxic jabs), Mind Control, Forced removal – Imprisonment – Assasinations/Deaths – Matial Law – Police State – Drones – CCTV/Internet/Phones Monitoring and Total Control of your life!! Basically do what they say or have your chip switched off making it impossible for you to go to the bank, go shopping, go to hospital or see a doctor etc without these basic needs ones fate is clearly sealed!! Despite all my efforts over many years on TV, Radio and writing hundreds of articles on this topic the so called compassionate human beings that grace this planet still go along with this huge cover-up and act like lost sheep in a world that is fast disappearing.

You'll never think the same way again. . . The Revelation. Washington D.C. and Masonic/Luciferic Symbology. There is much more to UFOs then Unidentified Flying Objects and aliens. People must understand the spiritual side of what is going on. These "gods" haven't left us. They live among us, controlling us via mind control tactics. I would trust that you would study the entire site, it has plenty to offer.