Tip 114 - Audio QR Codes. Imagine students’ artwork hanging in your school’s hallway and beside each masterpiece is a QR code. When parents, students, and other teachers scan the code using a mobile device, they hear the student telling about themselves and the relevance of their art... Or what about a QR code in the back of a library book that allows you to hear a student’s review of the book? 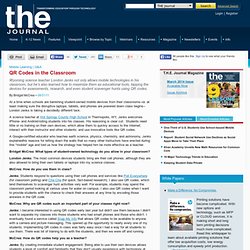 By Bridget McCrea08/31/11 At a time when schools are banishing student-owned mobile devices from their classrooms--or, at least making sure the disruptive laptops, tablets, and phones are powered down class begins--London Jenks is taking a decidedly different tack. A science teacher at Hot Springs County High School in Thermopolis, WY, Jenks welcomes iPhone- and Android-toting students into his classes. A Google-certified educator who teaches earth science, physics, chemistry, and astronomy, Jenks explainedhis reasons for letting down the walls that so many other instructors have erected during this "mobile" age and told us how the strategy has helped him be more effective as a teacher. QR Codes – What are they and how can I use them in my classroom? A QR Code is a type of barcode that is readable by dedicated QR barcode readers and camera telephones.

The code consists of black modules arranged in a square pattern on a white background. The information encoded may be text, URL, or other data*. Like me, you may have seen these codes in newspapers and magazines, on promotional material, in the corner of posters and wondered what they were all about. A square that consists of black and white squares that looks like an out of focus pixilated image? What’s all that about? First, watch this short, fun video from a primary class in Queensland to get an idea of how QR Codes are being used in the classroom, and then keep reading. Using QR codes to create educational posters. I have been pondering how to use QR codes in the classroom. 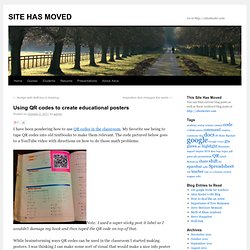 My favorite use being to tape QR codes into old textbooks to make them relevant. The code pictured below goes to a YouTube video with directions on how to do those math problems. Note: I used a super sticky post it label so I wouldn’t damage my book and then taped the QR code on top of that. While brainstorming ways QR codes can be used in the classroom I started making posters. I was thinking I can make some sort of visual that would make a nice info poster for any subject… which is when I thought it would be fun to make samples. Here is one for an English class, keep in mind these are just samples made by a math teacher Here is one I made for a historical timeline The timeline took me significantly longer than I anticipated, but it did get me to thinking that both of these would make great student projects! To create them I used Google Drawings. QR Code Generator? The Best QR Code Generators. There are quite a few QR Code generators online. 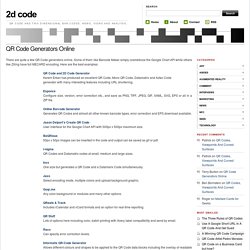 Some of them like Barcode Maker simply cosmeticize the Google Chart API while others like ZXing have full MECARD encoding. Here are the best examples: QR Code and 2D Code Generator Kerem Erkan has produced an excellent QR Code, Micro QR Code, Datamatrix and Aztec Code generator with many interesting features including URL shortening. Esponce Configure size, version, error correction etc., and save as PNG, TIFF, JPEG, GIF, XAML, SVG, EPS or all in a ZIP file. Online Barcode Generator Generates QR Codes and almost all other known barcode types, error correction and EPS download available. Jason Delport’s Create QR Code User interface for the Google Chart API with 500px x 500px maximum size. BeQRious 50px x 50px images can be inserted in the code and output can be saved as gif or pdf. Make your own QR Code Scavenger Hunt! Today was the first day of school. 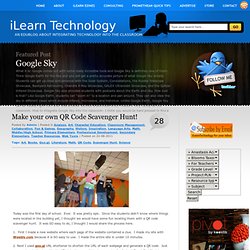 Ever. It was pretty epic. Since the students didn’t know where things were located in the building yet, I thought we would have some fun locating them with a QR code scavenger hunt. It was SO easy to do, I thought I would share the process here. 1. 2. 3. 4. 5. *Below is my example of the QR code and website they were connected to. This was a really easy activity to prepare for from a teacher perspective. We used this hunt as a way for students to familiarize themselves with the layout of the new school but it would also be a great activity for a math scavenger hunt “Find an item that represents three times four”, or colors in art “This is the color you get when you mix yellow and blue”, or literature “find an object that represents this character in our novel”. 40 interesting ways to use QR Codes in the classroom. QR Code Treasure Hunt Generator from classtools.net. QR Codes – Lesson and Resources. In response to recent interest in Quick Response codes I have created some lesson resources to introduce students to QR codes and provide them with some practical experience. 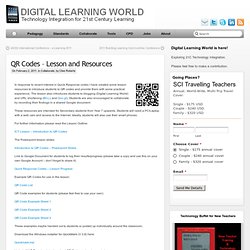 The lesson also introduces students to blogging (Digital Learning World) and URL shortening (Bit.Ly and Goo.gl). Students are also encouraged to collaborate by recording their findings in a shared Google document. These resources are intended for Secondary students from Year 7 upwards. Students will need a PC/Laptop with a web cam and access to the Internet. Ideally, students will also use their smart phones. For further information please read the Lesson Outline: 5 Real Ways To Use QR Codes In Education. QR codes… Disposable fad? 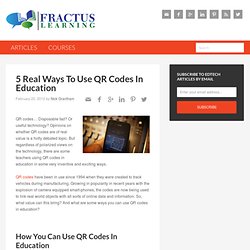 Or useful technology? Opinions on whether QR codes are of real value is a hotly debated topic. But regardless of polarized views on the technology, there are some teachers using QR codes in education in some very inventive and exciting ways. QR codes have been in use since 1994 when they were created to track vehicles during manufacturing. Growing in popularity in recent years with the explosion of camera equipped smart-phones, the codes are now being used to link real world objects with all sorts of online data and information. Book Reviews One of the best ideas I have heard for using QR codes is in the school library. Taking this concept a step further, try getting students to create their own book reviews or trailers. 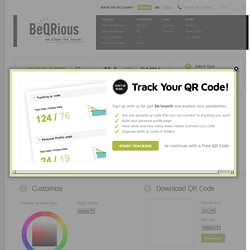 QR codes are probably the most popular and flexible two-dimensional barcode that is used by most businesses and individuals for anything from their marketing campaigns, education and even in ordinary lives and lets not forget just for fun! They’re widely used by any web design agency As QR codes gain popularity, more and more Web sites are offering free QR code generator services. With all the choices, and because they are all similarly free, most people just use the first QR code generator they find. But how do you distinguish one service from the other? 1. The best thing about QR codes is that it can contain a lot of different types of information behind it. 2.

On the other side of the spectrum, there are generators that try to incorporate as many types of information possible, but the resulting interface is too confusing to use to be of any help at all. 3. 4. 5. Free QR Code Generator, Coupon, Contact & Design QR Codes & Tracking. QR Code Generator - Make your own QR Code. Free. Visualead.com.