Contributor Covenant: A Code of Conduct for Open Source Projects. The Hugging Will Continue Until Morale Improves. I saw in today's news that Apple open sourced their Swift language. 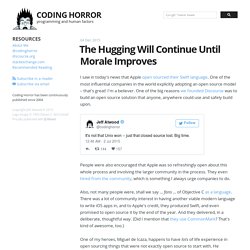 One of the most influential companies in the world explicitly adopting an open source model – that's great! I'm a believer. One of the big reasons we founded Discourse was to build an open source solution that anyone, anywhere could use and safely build upon. People were also encouraged that Apple was so refreshingly open about this whole process and involving the larger community in the process. They even hired from the community, which is something I always urge companies to do. Also, not many people were, shall we say … fans … of Objective C as a language. One of my heroes, Miguel de Icaza, happens to have lots of life experience in open sourcing things that were not exactly open source to start with. Which I also thought was kinda cool. It surprises me that anyone could ever object to the mere presence of a code of conduct. I have to say, I don't understand this at all.

Mr. Anyway, I wanted to say I'm sorry. Why the Open Code of Conduct Isn’t for Me. Github recently announced that they are adopting a new code of conduct for their open source projects. 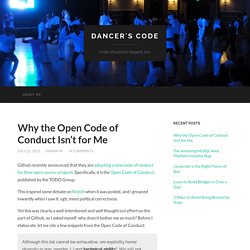 Specifically, it is the Open Code of Conduct, published by the TODO Group. This inspired some debate on Reddit when it was posted, and I groaned inwardly when I saw it: ugh, more political correctness. Yet this was clearly a well-intentioned and well thought out effort on the part of Github, so I asked myself: why does it bother me so much? Before I elaborate, let me cite a few snippets from the Open Code of Conduct: Although this list cannot be exhaustive, we explicitly honor diversity in age, gender, [...] and technical ability*.

Harassment and other exclusionary behavior aren’t acceptable. If someone has been harmed or offended*, it is our responsibility to listen carefully and respectfully, and do our best to right the wrong.(* = emphasis mine) Transphobic maintainer should be removed from project · Issue #941 · opal/opal. On Opalgate. On Opalgate On June 18 of this year a friend on IRC expressed his frustration with tweets by a person named Elia (@elia). 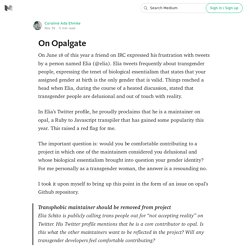 Elia tweets frequently about transgender people, expressing the tenet of biological essentialism that states that your assigned gender at birth is the only gender that is valid. Things reached a head when Elia, during the course of a heated discussion, stated that transgender people are delusional and out of touch with reality. In Elia’s Twitter profile, he proudly proclaims that he is a maintainer on opal, a Ruby to Javascript transpiler that has gained some popularity this year.

This raised a red flag for me. The important question is: would you be comfortable contributing to a project in which one of the maintainers considered you delusional and whose biological essentialism brought into question your gender identity? I took it upon myself to bring up this point in the form of an issue on opal’s Github repository. 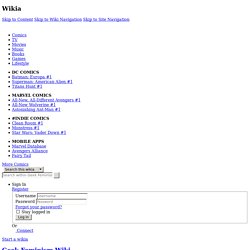 In response, Coraline Ada Ehmke opened issue 941 calling for clarification of the project maintainers' stance on the issue and its possible effect on future contributors. The response from other project maintainers was decidedly negative and included personal attacks against Coraline. What followed was an argument about whether a maintainer's publicly stated opinions had a bearing on the community around the project. The primary representative of the project in this discussion, who goes by the Github handle meh[1], went on to state that he would knowingly and gladly accept working with a child molestor or cross-burning racist as long as their contributed code was good.

It was later revealed that meh has created a number of Github projects with homophobic, sexist, and otherwise problematic names. Opalgate - Recherche sur Twitter.