Video games and age restrictions–the US and UK. The issue of a possible link between violence in computer games and the rising trend of antisocial behaviour in society is an ongoing debate. 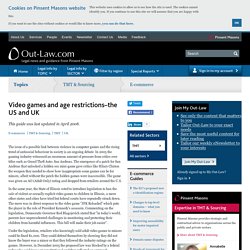 In 2005 the gaming industry witnessed an enormous amount of pressure from critics over titles such as Grand Theft Auto: San Andreas. The emergence of a patch for San Andreas that unlocked a hidden sex mini-game gave critics like Hilary Clinton the weapon they needed to show how inappropriate some games can be for minors, albeit without the patch the hidden games were inaccessible. The game was given an AO (Adult Only) rating and dropped from retailers around the U.S. In the same year, the State of Illinois voted to introduce legislation to ban the sale of violent or sexually explicit video games to children in Illinois, a move other states and cities have tried but federal courts have repeatedly struck down. Meet Dorsen, 8, who mines cobalt to make your smartphone work. By Alex Crawford, Sky News Special Correspondent A Sky News investigation has found children as young as four working in Congolese mines where cobalt is extracted for smartphones. 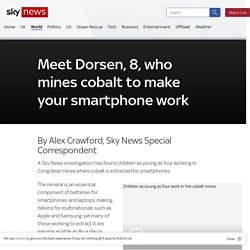 The mineral is an essential component of batteries for smartphones and laptops, making billions for multinationals such as Apple and Samsung, yet many of those working to extract it are earning as little as 8p a day in desperately dangerous conditions. Children as young as seven mining cobalt used in smartphones, says Amnesty. Children as young as seven are working in perilous conditions in the Democratic Republic of the Congo to mine cobalt that ends up in smartphones, cars and computers sold to millions across the world, by household brands including Apple, Microsoft and Vodafone, according to a new investigation by Amnesty International. 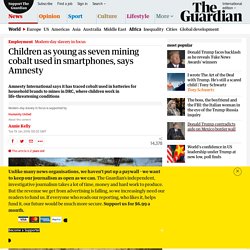 The human rights group claims to have traced cobalt used in lithium batteries sold to 16 multinational brands to mines where young children and adults are being paid a dollar a day, working in life-threatening conditions and subjected to violence, extortion and intimidation. More than half the world’s supply of cobalt comes from the DRC, with 20% of cobalt exported coming from artisanal mines in the southern part of the country. In 2012, Unicef estimated that there were 40,000 children working in all the mines across the south, many involved in mining cobalt.

He said that some of the company responses to Amnesty’s assertions were “staggering”. Software Engineering Code of Ethics. Short Version. 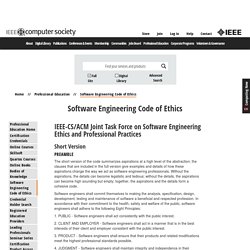 Ieee code of conduct. War Child - The charity for children affected by war. What are conflict minerals? 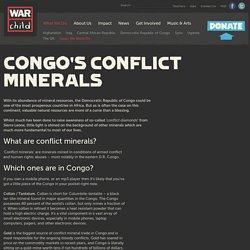 'Conflict minerals' are minerals mined in conditions of armed conflict and human rights abuses – most notably in the eastern D.R. Congo. Which ones are in Congo? If you own a mobile phone, or an mp3 player then it’s likely that you’ve got a little piece of the Congo in your pocket right now. Coltan / Tantalum. A Congolese man pans for gold. Who mines them? Difference Between Code of Ethics & Code of Conduct. Code of Ethics and Professional Conduct. Adopted by ACM Council 10/16/92. 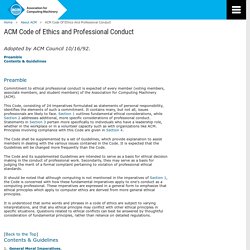 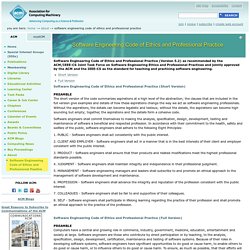 Without the aspirations, the details can become legalistic and tedious; without the details, the aspirations can become high sounding but empty; together, the aspirations and the details form a cohesive code. 1. PUBLIC - Software engineers shall act consistently with the public interest. 2. 3. 4. 5. 6. 7. 8. Principle 1: PUBLIC. Code of Ethics. Certified computing professionals, consistent with their obligation to the public at large, should promote the understanding of information processing methods and procedures using every resource at their command. 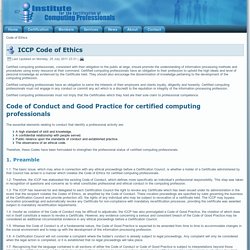 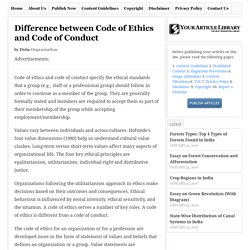 They are generally formally stated and members are required to accept them as part of their membership of the group while accepting employment/membership. Values vary between individuals and across cultures. Hofstede’s four value dimensions (1980) help us understand cultural value clashes. Long-term versus short-term values affect many aspects of organizational life. The four key ethical principles are egalitarianism, utilitarianism, individual right and distributive justice.

How The UK Video Game Age Rating System Works (or Doesn't) By Andy Robertson There’s a simple answer for anyone confused or alarmed about the content they find in a video game: read the ratings on the box. 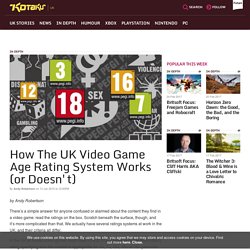 Scratch beneath the surface, though, and it’s more complicated than that. We actually have several ratings systems at work in the UK, and their criteria all differ. In the UK all boxed video-games must have a PEGI (Pan European Game Information) rating specifying who the content is appropriate for: 3+, 7+, 12+, 16+ or 18+-year-olds. Digital stores on game consoles voluntarily require a PEGI rating for games to be sold. Smartphone and tablet game ratings are defined by each platform holder. For anyone buying boxed games for consoles, the PEGI system is the one that will apply. This division now recognises the different expertise and criteria required to rate video game, as opposed to video, content. It is illegal to “supply” a game for “reward” to an individual who is under the stated age rating. Ukie's Ask About Games advice site.