Download. Django is available open-source under the BSD license. 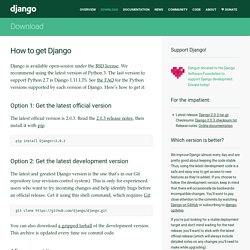 We recommend using the latest version of Python 3. The last version to support Python 2.7 is Django 1.11 LTS. See the FAQ for the Python versions supported by each version of Django. Here’s how to get it: Option 1: Get the latest official version. Python - django form fails to render_to_response. Generating a QRcode in Vcard format in python. Y ou can create a QRcode using the python pygooglechart wrapper for Google chart API. Here i used the wrapper to generate the QRcode as a django app but right now I wont go into the specifics of how to create a django app, maybe will do later, but this is the view i made for the qr app, i passed the form results to the QRChart and formatted the results in a Vcard format and its then rendered to the page.

You can see the script in action here test it using an QR android/iphone app Now the Views…. Django qr code. Obtain Short URLs and QR-Codes for Django Apps - tech.agilitynerd.com. Lately I've been interested in improving the interaction of my agilitycourses website for mobile users. 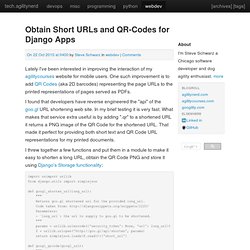 One such improvement is to add QR Codes (aka 2D barcodes) representing the page URLs to the printed representations of pages served as PDFs. I found that developers have reverse engineered the "api" of the goo.gl URL shortening web site. In my brief testing it is very fast. What makes that service extra useful is by adding ".qr" to a shortened URL it returns a PNG image of the QR Code for the shortened URL. That made it perfect for providing both short text and QR Code URL representations for my printed documents. I threw together a few functions and put them in a module to make it easy to shorten a long URL, obtain the QR Code PNG and store it using Django's Storage functionality: Yes, it has a nasty bare try/except.

The main entry point is get_url_qr_code_image(). Qrcode 2.4. Advanced Usage For more control, use the QRCode class. 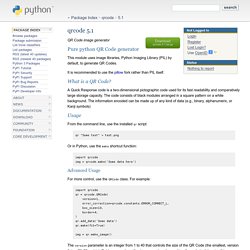 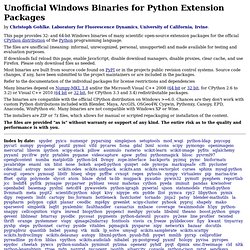 This page provides 32- and 64-bit Windows binaries of many scientific open-source extension packages for the official CPython distribution of the Python programming language. The files are unofficial (meaning: informal, unrecognized, personal, unsupported) and made available for testing and evaluation purposes. If downloads fail reload this page, enable JavaScript, disable download managers, disable proxies, clear cache, and use Firefox. 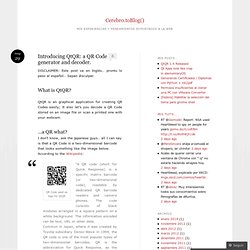 Sepan disculpar. QtQR is an graphical application for creating QR Codes easily; It also let’s you decode a QR Code stored on an image file or scan a printed one with your webcam. …a QR what? I don’t know, ask the japanese guys.. all I can say is that a QR Code is a two-dimensional barcode that looks something like the image below. According to the Wikipedia:

4 Ways to Use QR Codes in Your Web Apps - Caspio Blog. Quick Response (QR) codes have given businesses an efficient way to deliver specific information to users directly on their mobile device. 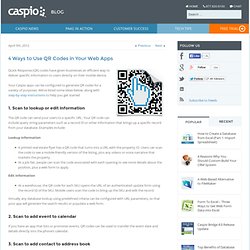 Your Caspio apps can be configured to generate QR codes for a variety of purposes. We’ve listed some ideas below, along with step-by-step instructions to help you get started. Qrtools.py - qtqr - GUI front-end for qrencode made in Python & Qt. QR code generator API. Pyqrcode - Python-Native QR Code generator. Make Your QR Codes Visually Appealing with QRHacker or Unitag « Novel Technology. Creating QR Codes with Python. The other day, I thought it would be fun to create a little program that could generate QR codes and show them onscreen with wxPython. 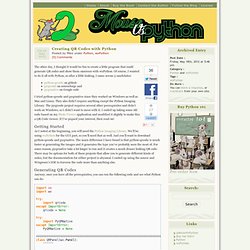 Of course, I wanted to do it all with Python, so after a little looking, I came across 3 candidates: python-qrcode on githubpyqrcode on sourceforge andpyqrnative on Google code I tried python-qrcode and pyqrnative since they worked on Windows as well as Mac and Linux. They also didn’t require anything except the Python Imaging Library. The pyqrcode project requires several other prerequisites and didn’t work on Windows, so I didn’t want to mess with it.

Getting Started As I noted at the beginning, you will need the Python Imaging Library. Generating QR Codes Anyway, once you have all the prerequisites, you can run the following code and see what Python can do: Untitled. Creating QR codes is a quick and easy process using a few model signals and the PyQRNative port. 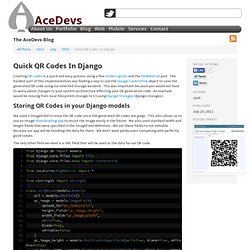 The hardest part of this implementation was finding a way to use the Django ContentFile object to save the generated QR code using our selected storage backend. This was important because you would not have to worry about changes to your system architecture effecting your QR generation code. An example would be moving from local filesystem storage to S3 using Django Storages (django-storages).