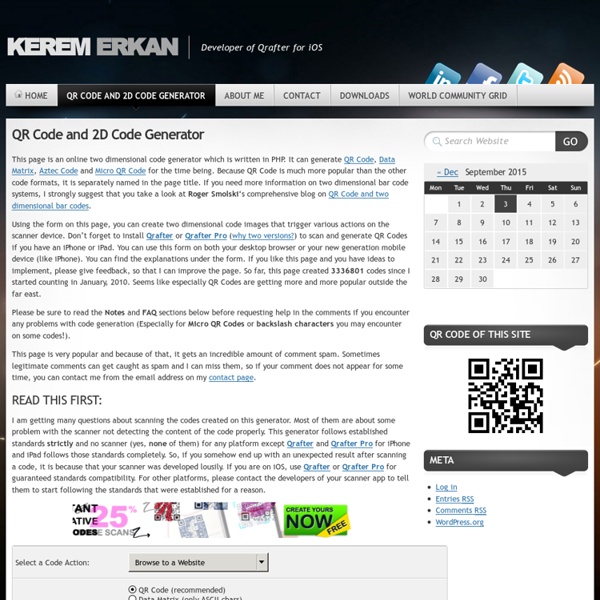 This page is an online two dimensional code generator which is written in PHP. It can generate QR Code, Data Matrix, Aztec Code and Micro QR Code for the time being. Because QR Code is much more popular than the other code formats, it is separately named in the page title. If you need more information on two dimensional bar code systems, I strongly suggest that you take a look at Roger Smolski‘s comprehensive blog on QR Code and two dimensional bar codes. Using the form on this page, you can create two dimensional code images that trigger various actions on the scanner device. Don’t forget to install Qrafter or Qrafter Pro (why two versions?) Please be sure to read the Notes and FAQ sections below before requesting help in the comments if you encounter any problems with code generation (Especially for Micro QR Codes or backslash characters you may encounter on some codes!). This page is very popular and because of that, it gets an incredible amount of comment spam. Notes:

Dynamic Drive- FavIcon Generator Use this online tool to easily create a favicon (favorites icon) for your site. A favicon is a small, 16x16 image that is shown inside the browser's location bar and bookmark menu when your site is called up. It is a good way to brand your site and increase it's prominence in your visitor's bookmark menu. Google URL Shortener Posted by Michael Hermanto, Software Engineer, Firebase We launched the Google URL Shortener back in 2009 as a way to help people more easily share links and measure traffic online. Since then, many popular URL shortening services have emerged and the ways people find content on the Internet have also changed dramatically, from primarily desktop webpages to apps, mobile devices, home assistants, and more. To refocus our efforts, we're turning down support for goo.gl over the coming weeks and replacing it with Firebase Dynamic Links (FDL).

20 Free Fonts Just Perfect for Retro and Vintage Designs Awww, vintage and retro style designes are simply awesome. By using various design elements such as textures, patterns and brushes to add an aged or used appearance designers can easily pull of timeless look. To compliment retro/vintage appearance it’s also important to use proper typography from the time period you are trying to represent. To help you out, I’ve rounded up 20 perfect retro and vintage fonts to use in your designs. I’m hoping that you found at least one new font to add to your collection. Which ones you like most?

vCard Generator, QR Code Generator, Data Matrix generator – Moongate Currently serving 424,314 cards We generate bulk QR codes on order. We accept PayPal. andere kant vd wereld Tunnel to the Other Side of the Earth Have you ever wondered which part of the other side of the earth is directly below you? Find out using this map tunnelling tool. Map Tunnelling Tool Options Unlink Zoom between Map 1 and Map 2

Scanvenger game Who can set up a Scanvenger Hunt? Everyone can set up a Scanvenger Hunt, its easy and fast. You can even test your own hunt, reedit questions, checkpoints and much more, if you'd like to. Don't worry we will also help you through if needed. Visa to Use Your Phone's Location to Prevent Credit Card Fraud Sure, you like all the great benefits of having your phone know where you are. Looking up directions or local weather information becomes that much faster. But outside companies and agencies are equally delighted to have access to your location information--and not just to send you coupons. Increasingly, they’re going to be using that information for purposes that have nothing to do with your convenience and fancy. Some of those purposes you’ll like. August 2007 I did these Backgrounds In Illustrator as a test for Craig McCracken to see if the Style from the Original Powerpuff Girls series would translate into Adobe Illustrator. these were cleaned up in Illustrator and colored based on reference from the original traditional paintings from the Powerpuff Girls Series.

Favorite GREP Expressions You Can Use Favorite GREP Expressions You Can Use by: David Blatner | July 5, 2011 GREP is an incredibly powerful technology for finding and replacing text. It shows up in several places in InDesign, notably the Find/Change dialog box and the GREP Styles feature. But you don't always have to figure out all the grep codes yourself! Use the table below to find a grep expression that is close to what you're looking for.