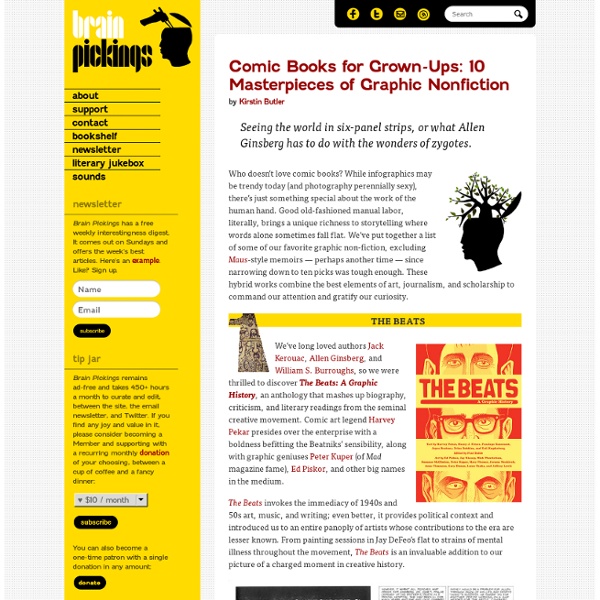 by Kirstin Butler Seeing the world in six-panel strips, or what Allen Ginsberg has to do with the wonders of zygotes. Who doesn’t love comic books? We’ve long loved authors Jack Kerouac, Allen Ginsberg, and William S. The Beats invokes the immediacy of 1940s and 50s art, music, and writing; even better, it provides political context and introduced us to an entire panoply of artists whose contributions to the era are lesser known. How do you make 500,000 declassified documents yield up their stories? Upton Sinclair-style muckraking for our modern era, Edible Secrets covers the CIA’s milkshake assassination plot of Fidel Castro, popcorn mind-control schemes, and how a box of Jello led to two death sentences during the 1950s Communist red scare. Whether you’re an activist, foodie, or history buff, Edible Secrets is a fascinating and fun creation about acts of agriculture — something each one of us, consciously or not, commits every day. Read our full review of the SmarterComics series here.

graphic novels NOTE: This site is no longer active. Please visit Graphic Novels in the Classroom, my Scoop.it site where I'm now curating articles that focus on working with graphic novels in the the classroom. For a detailed list of my publications and presentations, please visit my Professional Profile. (Just a couple of articles and papers are offered here) I'm happy to come and speak with teachers about graphic novels and their use in the classroom. Developing a graphic novel collection An article examining the issues surrounding the development of a graphic novel collection in the school library. My most recent presentation General ResourcesGraphic Novel LibGuide This guide from the Phillips Library at Aurora University will help you locate graphic novels, information for teaching with graphical materials, and caricatures and cartoons used in novels and stories. Graphic novels @ Barker A list with reviews of 50 or so of the most popular graphic novels in our secondary library (posted Nov, 2009).

The Super Dictionary One of the parts of his hand? Not even, “one of the long parts of his hand”? I mean, for all I know, you could be talking about Green Lantern’s knuckles! Lucky for you, Super Dictionary, that we know what you meant. And yeah, I guess Hal wears one ring. Then he had nine rings! Don’t even ask me what’s going on with Hal’s arm muscles. (Gif credit to themaskedman) Superheroes of Modernity Meet Superheroes of Pop Culture | Serial Optimist Gaga Faces the Past Dimitris Polychroniadis is an Athens, Greece Architect and Scenographer. He studied at the University of Greenwich with a BA in Architecture as well as a Masters in Urban Design. Inspiration for the project: “It is a mixture of stuff I really like and deeply appreciate. Gaga Faces the Past What would Lady Gaga’s dress code look like without the Bauhaus? Planet Rietveld – Home At Last Were would Superman be without the De Stijl art movement? The Joker Takes Over Lenin’s Tribune Is really ‘the will to power‘ the driving force? Down With Art. Gustav Klutsis made his ‘Maquette for a Radio-announcer‘ in 1922. SO Note: All images owned and cannot be reproduced by the artist. David is the publisher of Serial Optimist and writer of things that hopefully make people smile.

‘Shazam!’ Remembering when superheroes weren’t quite so cool April 09, 2013 | 11:55 a.m. Shazam! Remembering when superheroes werent quite so cool Michael Gray as Billy Batson, left, with Jackson Bostwick, who played Captain Marvel in the original incarnation of the "Shazam!" When the CW’s breakout hit series “Arrow” returns with new episodes on April 24, viewers can expect more soapy drama mixed with dark action thrills involving Stephen Amell as the handsome playboy-turned-vigilante Oliver Queen. The success of “Arrow” and its accessible take on comic canon is a reminder of how far we’ve come with superheroes on television from the days when TV producers seemed to try as hard as they could to make superheroes non-super. In 1939, Bill Parker and C.C. Then in 1974, CBS began airing the Filmation series “Shazam!” So it went with superheroes on television in the ’70s—a time when incredible feats of imagination were rendered as flat and preachy as an after-school special. Why was this? PHOTOS: Wonder Woman through the years As for “Shazam!”

Lifelounge guide to foreign superheroes | Entertainment News & Pop Culture Movie goers across the country held their breathes in unison in the lead up to the release of The Avengers , hoping and praying its creators weren’t going to empty another giant spandex covered bucket of shit all over us. Thankfully however, they saved us from such a travesty and instead delivered one of the best superhero movies ever made. They finally managed to get Hulk right with Mark Ruffalo righting the wrongs of Eric Bana’s hideous acting brain-fart, Chris Evan’s useless wok-wielding Captain America was kept buoyant by the rest of the ensemble, Iron Man was always pretty cool as was Thor, and Scarlett Johanssen…well…she was in pretty good form. Point being, the movie kicked ass because of Whedon’s solid and thought-out writing, no holds-barred directing and a perfectly gelled group of superheroes. Anyway, in the wake of the film’s success and the resurgence of quality superhero movies, we got to thinking about the rest of world’s costume donning, crime-fighting hero peoples. 1.

Grand Comics Database Religion of Comic Book Characters (esp. Super-Heroes) The emphasis of this page is on fictional characters who originated as comic book characters. Of course real-life people such as Pope John Paul II, St. Francis of Assisi, and Mother Teresa have been depicted in comic books (Marvel published one-shot comics about these prominent Catholics), but such people are not listed here. We want this page to be as accurate as possible, backed up by objective, published information and not based on conjecture. How do I find my favorite super-hero? Have a question about this website? Remember: For each character, you can click on the link in the "religious affiliation" column to see supporting material, excerpts from the comics, images, discussion, etc. about that character and their religious affiliation. Superheroes Major Supporting Characters For space reasons, the table below only lists some of the best known supporting characters in comics. Major Super-Villains and Other Antagonists