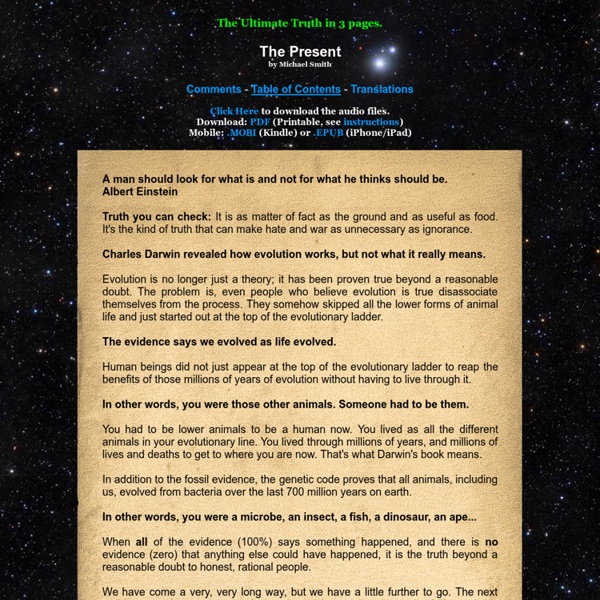 A man should look for what is and not for what he thinks should be. Albert Einstein Truth you can check: It is as matter of fact as the ground and as useful as food. Charles Darwin revealed how evolution works, but not what it really means. Evolution is no longer just a theory; it has been proven true beyond a reasonable doubt. The evidence says we evolved as life evolved. Human beings did not just appear at the top of the evolutionary ladder to reap the benefits of those millions of years of evolution without having to live through it. In other words, you were those other animals. You had to be lower animals to be a human now. In addition to the fossil evidence, the genetic code proves that all animals, including us, evolved from bacteria over the last 700 million years on earth. In other words, you were a microbe, an insect, a fish, a dinosaur, an ape... We have come a very, very long way, but we have a little further to go. How do you know you are dead? Everything is balanced. 1. Related:  mystique

Saudade Saudade (European Portuguese: [sɐwˈðaðɨ], Brazilian Portuguese: [sawˈdadi] or [sawˈdadʒi], Galician: [sawˈðaðe]; plural saudades)[1] is a Portuguese and Galician word that has no direct translation in English. It describes a deep emotional state of nostalgic or profound melancholic longing for an absent something or someone that one loves. Moreover, it often carries a repressed knowledge that the object of longing may never return.[2] A stronger form of saudade may be felt towards people and things whose whereabouts are unknown, such as a lost lover, or a family member who has gone missing. Saudade was once described as "the love that remains" after someone is gone. In Portuguese, "Tenho saudades tuas" (European Portuguese) or "Tenho saudades de você" (Brazilian Portuguese), translates as "I have saudade of you" meaning "I miss you", but carries a much stronger tone. In Brazil, the day of Saudade is officially celebrated on 30 January.[3][4] History[edit] Origins[edit] Definition[edit]

10 Ways Our Minds Warp Time How time perception is warped by life-threatening situations, eye movements, tiredness, hypnosis, age, the emotions and more… The mind does funny things to our experience of time. Just ask French cave expert Michel Siffre. In 1962 Siffre went to live in a cave that was completely isolated from mechanical clocks and natural light. When he tried to measure out two minutes by counting up to 120 at one-second intervals, it took him 5 minutes. But you don’t have to hide out in a cave for a couple of months to warp time, it happens to us all the time. 1. People often report that time seems to slow down in life-threatening situations, like skydiving. But are we really processing more information in these seconds when time seems to stretch? To test this, Stetson et al. (2007) had people staring at a special chronometer while free-falling 50 metres into a net. 2. We’ve all experienced the fact that time seems to fly when we’re having fun. 3. 4. 5. 6. 7. 8. 9. 10. Time is relative

7 Natural Uses For Baking Soda In The Garden Share Baking soda is a vital part of green cleaning and has so many uses in the house, but what about the garden. Here are 7 ways to use it in the garden. 1. Mix 4 teaspoons of baking soda and 1 gallon of water. 2. Powdery mildew is causing major problems with impatiens this year, but also can be a problem for other plants, like lilacs, cucumbers, squash and zinnias. Spray Recipe: 1 tablespoon of baking soda, 1 gallon of water, 1 tablespoon of vegetable oil, 1 tablespoon of dishwashing liquid Mix all the ingredients together and spray plants weekly. 3. Mix in 1 gallon of water, 4 teaspoons baking soda, 1 teaspoon biodegradable soap. 4. Pour or sweep baking soda in a thick layer into cracks on a sidewalk or patios. 5. Mix equals parts flour and baking soda and dust plants (cabbage, broccoli, kale) being eaten by cabbage worms. 6. Simply wet the crabgrass, pour a heavy dusting of baking soda on the weed. 7. Source: Plant Care Today

Brain Games & Brain Training - Lumosity Free Online Writing Courses - Creative Writing Classes in Fiction and Poetry "Both courses I have taken have with Creative Writing Now have been amazing. Each time I have learned something new. The one thing I love, you take everything apart and give examples." - Katlen Skye "As usual - I already love the course on Irresistible Fiction, rewriting a lot and improving greatly even after the first lesson. “Essentials of Fiction proved that I could indeed write and I wrote every day, much to my boyfriend's dismay (waa sniff).” - Jill Gardner "I am loving the course and the peer interaction on the blog is fantastic!!!" "I'm enjoying the weekly email course, Essentials of Poetry Writing. "Thank you for all the material in this course. "I was pleasantly surprised at the quality of the lessons and feel they were very helpful in introducing new ideas and perspectives to my writing. "Thanks very much for this course. "I'm learning so much. "Thank you so much!! "Thank you for a course that builds writing skills with direction to excellence.

Why you really should keep a journal, no matter how cheesy that sounds | News If you've spent any significant time reading books or articles on the "science of happiness", you'll have encountered what I've long thought of as the Cheesiness Problem. It's an inescapable fact that some of the most thoroughly evidence-backed techniques for enhancing one's mood are also the most excruciatingly embarrassing – the sorts of things that those of us who imagine ourselves to be rational, sceptical types would never dream of confessing to. This is awkward, since (as I've written before) it means having to choose between maintaining a pose of sardonic detachment or doing what actually works. For me, the most vivid example is keeping a gratitude journal. On the one hand, it really helps. Anyway, this problem just got worse. Researchers led by Elizabeth Broadbent, a senior lecturer in health psychology at the University of Auckland in New Zealand, studied 49 healthy senior citizens, aged 64 to 97.

Which of the 8 kinds of intelligence do you have? Along with youth, beauty and wealth, our culture places a high premium on intelligence, which is generally seen as a fairly concrete trait. People are smart or they’re not, and psychologists and educators have a slew of standardized tests with which to gauge a person’s intellect. The terms IQ, general intelligence, general cognitive ability and general mental ability are all used to refer to what cognitive tests measure — which is primarily an evaluation of mathematical skill, verbal fluency and spatial visualization. But what about a musical genius who does poorly with spelling or a brilliant linguist who has a hard time with fractions? This is where Dr. The official Multiple Intelligences website describes them in the following ways: 1. The ability to conceptualize and manipulate large-scale spatial arrays (for example, an airplane pilot or sailor), or more local forms of space (for example, an architect or chess player). 2. 3. 4. 5. 6. The ability to interact effectively with others.

Monsanto Unapproved GMO Wheat Escapes From The Lab, Lawsuits Follow Monsanto, the world’s largest seed company, recently reported the finding of unapproved genetically modified wheat in an Oregon field—and nobody knows where it came from. This is of concern, especially to farmers, but raises a larger question too. If genetic modification is the future, how will we control our creations? The wheat at the center of this mystery was genetically modified to resist Monsanto’s herbicide, Roundup. The Oregon farmer discovered the plants growing in a fallow field and tried to kill them with the widely-used herbicide. When they survived, he sent samples to Oregon State University where tests revealed it had been genetically modified to contain a Roundup resistant CP4/maize EPSPS gene. Although Monsanto got FDA approval for the wheat in food, they withdrew their EPA application in 2004, due to farmers worried about the potential loss of markets in Europe and Asia. There are benefits to genetically modified crops.

Joustava Mieli Interview: It's a FALL OUT BOY face-off. PATRICK STUMP vs. JOE TROHMAN. by Shahlin Graves Holy smokes! FALL OUT BOY returned to our lives in a spectacular fashion this year, favouring New Zealand with an intimate one-off Auckland show back in March, and followed up by the release of the band's fifth studio album 'Save Rock And Roll', which debuted at Number One in their homeland and features the likes of Elton John and Courtney Love. During their recent trip here, Coup De Main faced vocalist PATRICK STUMP and guitarist JOE TROHMAN off against each other in a test of their friendship with motivational sweet treats... "[Elton John,] Courtney Love, Big Sean, Foxes - they all brought really unique ideas and really, really were far more real collaborations than we've ever had because they did their own thing, as opposed to us telling them: "You do this because we only have ten minutes to get this done." CDM: Rad. CDM: Which song on the new album do you think best represents Fall Out Boy in 2013? Click HERE to read our March 2013 interview with Patrick Stump.