Lack of belief in gods 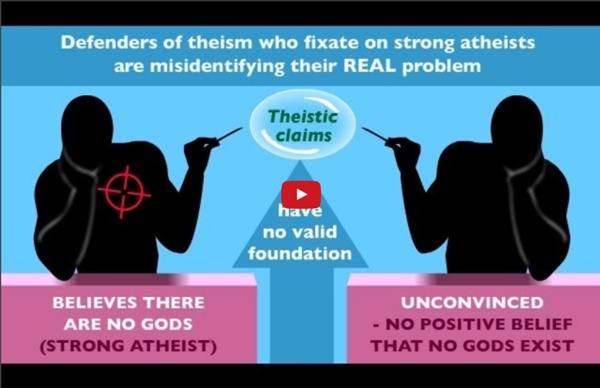 Guns Don't Deter Crime, Study Finds A high-profile shooting, like the June 17 crime that left dead nine members of a historically black church in Charleston, South Carolina, is typically followed by calls for greater gun control, along with counter arguments that the best way to stop gun crimes is with more guns. "The one thing that would have at least ameliorated the horrible situation in Charleston would have been that if somebody in that prayer meeting had a conceal carry or there had been either an off-duty policeman or an on-duty policeman, somebody with the legal authority to carry a firearm and could have stopped the shooter," presidential candidate Mike Huckabee said in a Fox News interview on June 19. A new study, however, throws cold water on the idea that a well-armed populace deters criminals or prevents murders. Instead, higher ownership of guns in a state is linked to more firearm robberies, more firearm assaults and more homicide in general. [5 Milestones in Gun Control History] More guns, more gun crime

An Illustrated Book of Bad Arguments A reader recently wrote in asking if I could share a bit about the process of putting the book together and talk about how the project started. Certainly. I go on two solitary walks every day. There is a small park off the Embarcadero that is tucked away in a quiet spot. It was on a day in October of last year when, during one of those quiet moments on that bench, I recalled my college years and how outspoken I happened to be during them, an observation only made interesting by the fact that I have since turned into the quietest of beings. A realization that coincided with that nostalgic whiff was that a sizable amount of the discourse nowadays continues to be plagued with bad reasoning. Hence, the idea that finally shook me into soberness was one that had been fermenting for a while. Once I had a draft version of the book ready, I sent it to one of my life-long idols, Marvin Minsky, co-founder of the MIT Artificial Intelligence Lab and author of The Society of Mind.

Religious literacy Standing Up To The Experts by Orlando Wood In a small room in Austin, Texas, a group of fifteen people are single-handedly deciding what is taught to the next generation of American children. The highly politicized fifteen-member Texas State Board of Education is currently going through the once-in-a-decade process of rewriting the teaching and textbook standards for its nearly 5 million schoolchildren. And when it comes to textbooks, what happens in Texas affects the whole nation. Texas is the nation’s largest textbook market. Unlike other states, that allow their districts to pick and choose what books they buy, Texas buys them centrally – making Texas unbelievably influential on the standards that Textbook publishers use as a basis for their textbooks. Over the course of the current review, the board has been focusing on infusing the school curriculum with broader conservative and religious themes. In the time we’ve been working on this project, we’ve amassed over 200 hours of footage. This is where you come in… Thank you!

The Dark Arts of Attentional Design by Jag Bhalla We must pay more attention to the opposite of attention deficit disorder (A.D.D.). 1. Our “age of distraction” also features excessive focus problems. 2. 3. 4. 5. 6. 7. 8. 9. 10. 11. 12. 13. In this brave new world, old ideas aren’t a safe bet. Illustration by Julia Suits, The New Yorker Cartoonist & author of The Extraordinary Catalog of Peculiar Inventions

At work as at home, men reap the benefits of women’s “invisible labor” By now, many of us have at least seen the trailer for The Revenant, with Leonardo DiCaprio cast as Hugh Glass, a fur trapper and hunter who embarks on a mission for vengeance after being left for dead by his cohorts in the wake of a bear attack. As it turns out, Hugh Glass was a real guy who had a pivotal role in the westward expansion of the fur trade, and by extension, America. And he was even more of a badass than we see in the movie—though not for the reasons you might expect. The lucrative fur trade was a driving force behind American exploration, as Eric Jay Dolin explains in his chronicle, Fur, Fortune, and Empire: The Epic History of the Fur Trade in America. Mountain men Lewis and Clark did not find such a route. Dolin estimates only a few thousand men pursued this risky path. Among the toughest of the mountain men were the free trappers. Eventually, Glass became a representative of free traders. “This was all the coaxing McKenzie needed,” Dolin wrote. A grizzly ordeal

how the uninformed help ISIS The world has to confront an increasingly intractable problem: the growing threat from radical Christian terrorists who have slaughtered thousands of innocents. There’s the loose affiliation of terror groups tied to the Christian Identity movement, as well as the Orange Volunteers, the Army of God, the Phineas Priesthood and many, many others. And those are just the homegrown organizations—Christianity has inspired violent groups overseas that murder and behead people, and rape and kill young children. The Lord’s Resistance Army, a radical fundamentalist Christian group, has committed thousands of murders and kidnappings in the name of Jesus. There’s also the Church of Almighty God in China, the National Liberation Front of Tripura in India and other Christian terrorist organizations around the globe. Try Newsweek for only $1.25 per week Offended by what you’ve just read? Take a moment to reflect. That is why Obama and George W. Bush said much the same.

Extraordinary Popular Delusions and the Madness of Crowds book by Charles Mackay "Night wind hawkers" sold stock on the streets during the South Sea Bubble. (The Great Picture of Folly, 1720) A satirical "Bubble card" The subjects of Mackay's debunking include alchemy, crusades, duels, economic bubbles, fortune-telling, haunted houses, the Drummer of Tedworth, the influence of politics and religion on the shapes of beards and hair, magnetisers (influence of imagination in curing disease), murder through poisoning, prophecies, popular admiration of great thieves, popular follies of great cities, and relics. In later editions, Mackay added a footnote referencing the Railway Mania of the 1840s as another "popular delusion" which was at least as important as the South Sea Bubble. Volume I: National Delusions[edit] Economic bubbles[edit] Chapters in Vol I[edit] Volume II: Peculiar Follies[edit] Witch Hunter, Matthew Hopkins Crusades[edit] Witch mania[edit] Chapters in Vol II[edit] Volume III: Philosophical Delusions[edit] Alchemists[edit] Quotations[edit] Notes

The truth about "political correctness" is that it doesn't actually exist Jonathan Chait has written an article for New York Magazine about his concerns that political correctness threatens free debate by trying to silence certain points of view. Political correctness, in Chait's view, is a "system of left-wing ideological repression" that threatens the "bedrock liberal ideal" of a "free political marketplace where we can reason together as individuals." He writes, "While politically less threatening than conservatism (the far right still commands far more power in American life), the p.c. left is actually more philosophically threatening. It is an undemocratic creed." But political correctness isn't a "creed" at all. Rather it's a sort of catch-all term we apply to people who ask for more sensitivity to a particular cause than we're willing to give — a way to dismiss issues as frivolous in order to justify ignoring them. That's a much bigger threat to the "free political marketplace" that Chait is so eager to protect. Look at Chait's own examples.

Saraswati’s life was one of a million mutinies – but she always had the last word Each year in the month of Magha (the 11th month in the Hindu calendar), the fifth day of the new moon, or Vasant Panchami, marks the day for Saraswati pooja. This year, it falls on February 12. Yet few of those who offer flowers, vermilion, incense and prayers to this cerebral goddess and her symbols – musical instruments, pen, paper and ink – realise that she is one of the rare Vedic deities to have survived through the centuries with her name and mystical powers intact. It is especially remarkable because according to myths, Saraswati, has repeatedly challenged the authority and might of the post-Vedic male trinity of Brahma, Vishnu and Mahesh/Shiva. Saraswati also managed to elbow out her arch–rival Lakshmi (Sri, the Vedic goddess of wealth) and usurped the holy day of Magha Shukla Panchami, or Sri Panchami, for herself. The source of Saraswati Let us start Saraswati’s tale at the very beginning. Free soul One myth describes her as the cerebral progeny of Brahma. Essence of art

Networks of Genome Data Will Transform Medicine Breakthrough Technical standards that let DNA databases communicate. Why It Matters Your medical treatment could benefit from the experiences of millions of others. Key Players Global Alliance for Genomics and Health Google Personal Genome Project Noah is a six-year-old suffering from a disorder without a name. A match could make a difference. In January, programmers in Toronto began testing a system for trading genetic information with other hospitals. One of the people behind this project is David Haussler, a bioinformatics expert based at the University of California, Santa Cruz. Haussler is a founder and one of the technical leaders of the Global Alliance for Genomics and Health, a nonprofit organization formed in 2013 that compares itself to the W3C, the standards organization devoted to making sure the Web functions correctly. The unfolding calamity in genomics is that a great deal of life-saving information, though already collected, is inaccessible. —Antonio Regalado

Spanking Children Affects Behavior as Adults, Not in a good way- New Study A new study that analyzed 50 years of research on spanking concludes that the more children are spanked, the more chance there is that they'll actually listen less to parents and will grow up with a host of issues, ranging from aggression to cognitive and mental health problems. In fact, spanking has the opposite effects of what parents want to accomplish. "Our analysis focuses on what most Americans would recognize as spanking and not on potentially abusive behaviors," said professor Elizabeth Gershoff of the University of Texas at Austin. "We found that spanking was associated with unintended detrimental outcomes and was not associated with more immediate or long-term compliance, which are parents' intended outcomes when they discipline their children." Perhaps you think that spanking is no longer a widespread practice, but as many as 80% of parents worlwide spank their children, according to a 2014 UNICEF report. In related research, here's Dr.

'Inventing American Religion': What Is Lost in Trying to Understand Religion Through Polling and Statistics? There is no sphere of life that polling hasn’t touched. The language of data is ubiquitous: X percent of Americans think this, Y percent identify as that. Even when they don’t actually say much, numbers carry a sheen of authority, which is part of why polling has become the unquestioned tool of choice for establishing Truth in the public sphere. Not all statistics are created equal, of course. Many rely on tiny samples or skewed audiences or biased responses, or are produced by firms with a vested interest in reaching a certain conclusion. These biases can be hard to detect, or too much trouble to decode; and when statistics are reported in the media, they are often embraced with a misguided deference to factiness. Bad stats are easy targets, though. In its worst form, this kind of critique can be self-indulgent, overly academic, and boring. Polls about religion impose neatness on this messy struggle with existence. “What would we lose if we didn’t have Pew kinds of surveys?

Mohammed: the Anti-Innovator, with Ayaan Hirsi Ali click2x Transcript Ayaan Hirsi Ali: Early on, it seemed as if Mohammed's ambition was simply to go from door to door from person to person and say, "Leave alone what you believe in. Believe in the one God, the one who spoke to me through the angel Gabriel." Of course I don't argue with that.