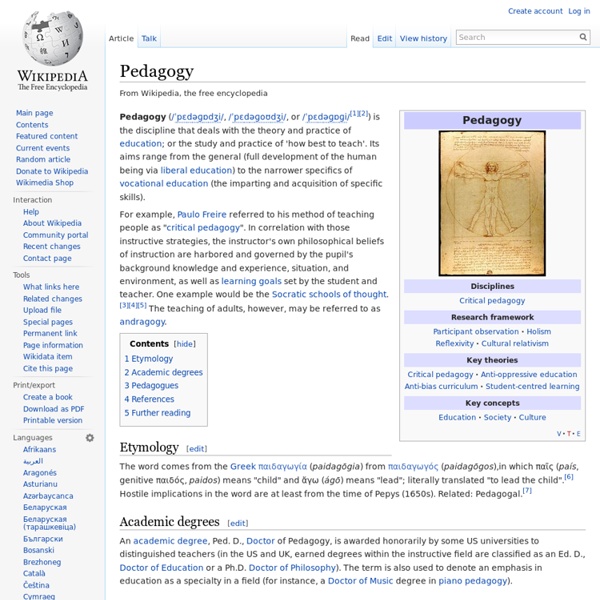 Pedagogy (/ˈpɛdəɡɒdʒi/, /ˈpɛdəɡoʊdʒi/, or /ˈpɛdəɡɒɡi/[1][2]) is the discipline that deals with the theory and practice of education; or the study and practice of 'how best to teach'. Its aims range from the general (full development of the human being via liberal education) to the narrower specifics of vocational education (the imparting and acquisition of specific skills). For example, Paulo Freire referred to his method of teaching people as "critical pedagogy". Etymology[edit] The word comes from the Greek παιδαγωγία (paidagōgia) from παιδαγωγός (paidagōgos),in which παῖς (país, genitive παιδός, paidos) means "child" and ἄγω (ágō) means "lead"; literally translated "to lead the child".[6] Hostile implications in the word are at least from the time of Pepys (1650s). Academic degrees[edit] An academic degree, Ped. Pedagogues[edit] Douris Man with wax tablet The word pedagogue actually relates to the slave who escorts Roman children to school. References[edit] Further reading[edit] Related:  Montainge

Heutagogy In education, heutagogy, is a term coined by Stewart Hase and Chris Kenyon of Southern Cross University in Australia, and is also called self-determined learning. The basic tenet of the approach is that it is the learner who should be at the centre of their own learning, and hence that 'learning' should not be seen as teacher-centric or curriculum-centric, but learner-centric. (1) Since the theory was first launched in 2000 it has become accepted as a practical proposition with its approach being particularly suitable in e-learning environments. Recent (post-2010) research into brain plasticity indicates that the approach can be useful in increasing learning capability. (2) [1] See also[edit] References[edit] Jump up ^ Samantha Chapnick and Jimm Meloy (2005). Further reading[edit] Stewart Hase and Chris Kenyon (December 2000).

Middle French Middle French (French: le moyen français) is a historical division of the French language that covers the period from the 14th to the early 17th centuries.[2] It is a period of transition during which: the French language became clearly distinguished from the other competing Oïl languages, which are sometimes subsumed within the concept of Old French (l’ancien français)the French language was imposed as the official language of the kingdom of France in place of Latin and other Oïl and Occitan languagesthe literary development of French prepared the vocabulary and grammar for the Classical French (le français classique) spoken in the 17th and 18th centuries. History[edit] The most important change found in Middle French is the complete disappearance of the noun declension system (already underway for centuries). There is no longer a distinction between nominative and oblique forms of nouns, and plurals are indicated simply with an s. Literature[edit] Notes[edit] References[edit]

Poisonous pedagogy Poisonous pedagogy, also called black pedagogy, from the original German name Schwarze Pädagogik, is a psychological and sociological term describing a subset of traditional child-raising methods which modern sociologists and psychologists describe as repressive and harmful. It includes behaviors and communication that theorists consider to be manipulative or violent, such as corporal punishment.[1] Origin[edit] "Poisonous pedagogy", is described by these theorists as what happens when a parent (or teacher, nurse, or other caregiver) believes that a young child's behavior demonstrates that the child is infected with the "seeds of evil", and therefore attempts to weed out the evil, either by emotional manipulation or by brute force. Historical background[edit] Ancient cultures[edit] "Spare the Rod, Spoil the Child" is a saying that was recorded by the Roman poet, Juvenal, and is also recorded with variations in Sumeria and China prior to the emergence of western European civilisation.

Discipline To think good thoughts requires effort. This is one of the things that discipline – training – is about. Use of the word discipline[edit] Children being educated to use public litter bins is a form of disciplinary education that is expected by some societies. Discipline is a moral obligation among many groups of people. In the military, discipline regards the efforts made by superiors to punish the serviceperson. History[edit] Disciplinarians have been involved in many societies throughout history. Common Techniques[edit] See also[edit] References[edit] Jump up ^ Grote, Dick (2006).

Oracle The word oracle comes from the Latin verb ōrāre "to speak" and properly refers to the priest or priestess uttering the prediction. In extended use, oracle may also refer to the site of the oracle, and to the oracular utterances themselves, called khrēsmoi (χρησμοί) in Greek. Oracles were thought to be portals through which the gods spoke directly to people. In this sense they were different from seers (manteis, μάντεις) who interpreted signs sent by the gods through bird signs, animal entrails, and other various methods.[1] Origins[edit] Pythia[edit] Pythia, the oracle at Delphi, was said to be infallible.[6] Pythia only gave prophecies the seventh day of each month, seven being the number most associated with Apollo, during the nine warmer months of the year; thus, Delphi was not the major source of divination for the ancient Greeks. The Delphic Oracle exerted considerable influence throughout Hellenic culture. The oracle's powers were highly sought after and never doubted. Dodona[edit]

José Saramago More than two million copies of Saramago's books have been sold in Portugal alone and his work has been translated into 25 languages.[4][5] A proponent of libertarian communism,[6] Saramago criticized institutions such as the Catholic Church, the European Union and the International Monetary Fund. An atheist, he defended love as an instrument to improve the human condition. In 1992, the Government of Portugal under Prime Minister Aníbal Cavaco Silva ordered the removal of The Gospel According to Jesus Christ from the Aristeion Prize's shortlist, claiming the work was religiously offensive. Disheartened by this political censorship of his work,[7] Saramago went into exile on the Spanish island of Lanzarote, upon which he resided until his death in 2010.[8][9] Saramago was a founding member of the National Front for the Defense of Culture in Lisbon in 1992, and co-founder with Orhan Pamuk, of the European Writers' Parliament (EWP). Early and middle life[edit] Death and funeral[edit]

Dusty Springfield Windmills of your Mind Michel Onfray Michel Onfray (French: [miʃɛl ɔ̃fʁɛ]; born 1 January 1959) is a contemporary French writer and philosopher who promotes hedonism, atheism,[2] and anarchism.[3] He is a highly prolific author on philosophy, having written more than 100 books.[4][5] He has gained notoriety for writing such works as Traité d'athéologie: Physique de la métaphysique (translated into English as Atheist Manifesto: The Case Against Christianity, Judaism, and Islam), Politique du rebelle: traité de résistance et d'insoumission, Physiologie de Georges Palante, portrait d'un nietzchéen de gauche, La puissance d'exister and La sculpture de soi for which he won the annual Prix Médicis in 1993. Life[edit] Born to a family of Norman farmers, Onfray was sent to a weekly Catholic boarding school from ages 10 to 14. In 2015, he published Cosmos, the first book of a trilogy. Philosophy[edit] Onfray writes that there is no philosophy without self-psychoanalysis. Hedonism[edit] For Onfray: Relation to hedonism[edit] Atheism[edit]