What if Dr. Seuss wrote The Call of Cthulhu? (UPDATED) 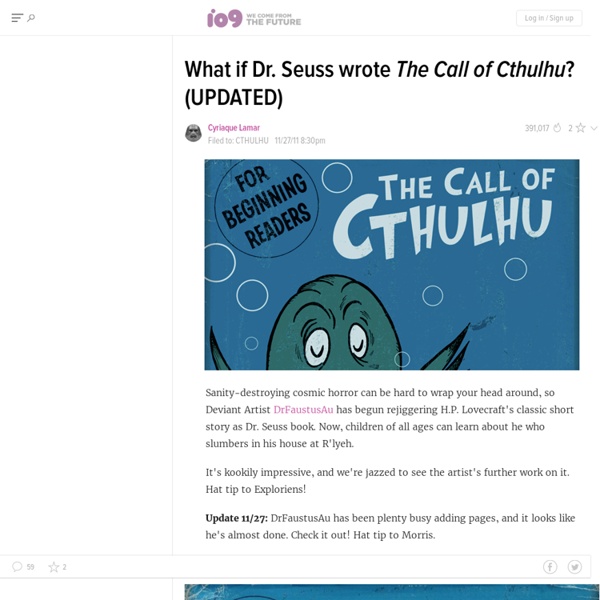 List of paradoxes This is a list of paradoxes, grouped thematically. The grouping is approximate, as paradoxes may fit into more than one category. Because of varying definitions of the term paradox, some of the following are not considered to be paradoxes by everyone. Although considered paradoxes, some of these are based on fallacious reasoning, or incomplete/faulty analysis. Logic[edit] Self-reference[edit] These paradoxes have in common a contradiction arising from self-reference. Barber paradox: A barber (who is a man) shaves all and only those men who do not shave themselves. Vagueness[edit] Ship of Theseus (a.k.a. Mathematics[edit] Statistics[edit] Probability[edit] Infinity and infinitesimals[edit] Benardete's paradox: Apparently, a man can be "forced to stay where he is by the mere unfulfilled intentions of the gods".Ross–Littlewood paradox: After alternatively adding and removing balls to a vase infinitely often, how many balls remain? Geometry and topology[edit]

How To Build A Fireball You Can Hold&Video - StumbleUpon The Best Science Fiction Books (According to Reddit) Recently, someone asked Reddit for a list of the best science fiction books of all time. Being a fan of sci-fi, and wanting to expand my own reading list, I thought it would be helpful to tally the results and preserve them here for future reference. I've also included selected quotes from the comments, as well as my own notes on the books I've already read. PS: All book images in this post are copyright Amazon, and were retrieved using my Big Book Search Engine. So, without further ado, here are the Greatest Sci-Fi Books of All Time, ordered by upvote count: Dune Frank Herbert - 1965 "There's a reason it's the global top selling science fiction book of all time." - NibblyPig If you have a chance, track down the excellent full cast audiobook (unabridged!) The Hitchhiker's Guide to the Galaxy Douglas Adams - 1979 "I really love the cool combination of humor, philosophy, and sheer nuttiness of the entire series." - Scarbrow Ender's Game Orson Scott Card - 1985 Foundation Trilogy Isaac Asimov - 1942

party receiver oct 26, 2006 party receiver by jinseup ted shin from usa designer's own words: This is a small electronic device that receives an FM signal from your music player, i.e. ipod, cell phone, cd player or any device equipped with an FM transmitter. At a party it is always hard to control the music you play, the sound of volume is not playing evenly throughout the place and you always have to have a big and bulky stereo system. Just plug this simple device into your power outlets; it will receive songs from your music player, even from your tiny ipod shuffle throughout entire place. It has a simple mechanism, speaker, led, and FM receiver. At first you plug in to a power outlet, the front indicator light will flash. If you like to pump up the volume you plug more in. title usage detail jinseup ted shin

A syllabus and book list for novice students of science fiction literature I was going to say that Dune has to be on the list but considering that this is a list for beginners it may be a little dense for newcomers. Is world building in general being left for the 200 level course? @go-falcons: As opposed to PK Dick or Gibson? Neuromancer, for as much as I love it, takes a bit of a mental adjustment to absorb the density of that writing. It's like eating pumpernickel bread and a guiness. Bradbury was also mentioned as being more of a 101 writer... @SupaChupacabra: It's not for young readers - it's more of a university survey course. Lethal Throwing Cards If you watch the following video, you will be able to see one of the world’s leading card-throwing experts practicing his craft. With a business card and a flick of his wrist he can pop balloons, extinguish candles, hit targets, etc.: Around the 50-second point, you will also see him impale a tomato with a business card. Around 3:15, Rick Smith demonstrates his technique very quickly. How to throw cards fast and effectively !!!!! See also: If you need a source of cheap playing cards, check out the dollar store – two decks for a buck. One level up from card throwing is knife throwing: - the fastest knife thrower in the world - How to throw knives [[[Jump to previous How To - How to blow your money if you are super-wealthy]]]

Japanese Folktales selected and edited by D. L. Contents Return to D. The Two Frogs Once upon a time in the country of Japan there lived two frogs, one of whom made his home in a ditch near the town of Osaka, on the sea coast, while the other dwelt in a clear little stream which ran through the city of Kyoto. So one fine morning in the spring they both set out along the road that led from Kyoto to Osaka, one from one end and the other from the other. They looked at each other for a moment without speaking, and then fell into conversation, explaining the cause of their meeting so far from their homes. "What a pity we are not bigger," said the Osaka frog; "for then we could see both towns from here, and tell if it is worth our while going on." "Oh, that is easily managed," returned the Kyoto frog. This idea pleased the Osaka frog so much that he at once jumped up and put his front paws on the shoulder of his friend, who had risen also. "Dear me!" The Mirror of Matsuyama "What have you hidden in your sleeve?"

10 Satirical Novels that Could Teach You To Survive the Future SExpand An excellent novel that should definitely be on this list is Greg Costikyan's First Contract. The Amazon blurb gives the key points: An alien landing suddenly changes successful CEO Johnson Mukerjii's perfect life. His company is now worthless, and his lovely wife is now his lovely ex, taking every penny of liquid assets with her. Johnson's only hope to reclaim his life is to rebuild his connections with a strange science fiction writer whom the aliens seem to like...and to find a product that the aliens will buy. Although the plot takes place in the context of first contact with aliens, the story is a satire on globalization and the importance of the theory of competitive advantage in a free trade environment.

10 Great Science Fiction Novels with Go-Back-To-Bed Depressing Endings Kinja is in read-only mode. We are working to restore service. "In his quest he accidently unleashes monsters, slake moths, onto the city of Bas-Lag" Should be "city of New Crobuzon". Flagged Whoops.