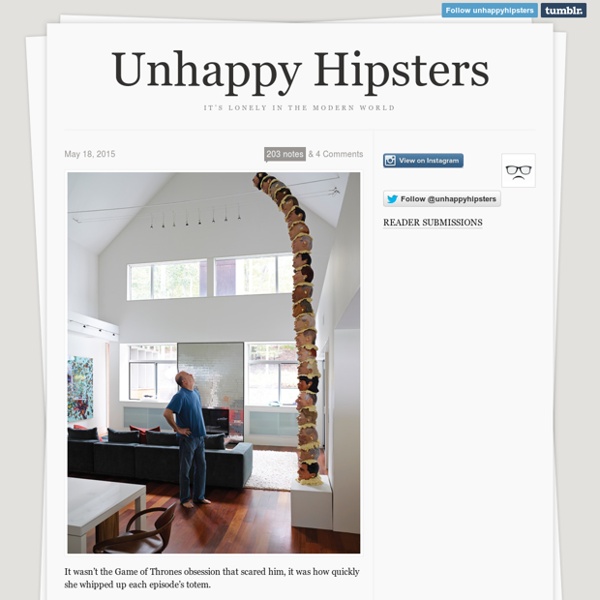 No. 570 - 2012.1024 Trees are fundamental to urban landscapes and natural ecosystems. Wood from trees is a fundamental material for architecture. The tension between wood in living trees, and wood in buildings and other products, is arguably at an all-time-high on planet Earth. Sinister Sites: The Georgia Guidestones The Georgia Guidestones is a mysterious monument on which are carved ten “commandments” for a “New Age of Reason”. The first commandment? Maintaining the world population under 500 million people. Another sinister fact: the authors of what we now call the American Stonehenge are still a “mystery”… except for those in the know.

A bit late Today is the last day of my 100 Day Project, #picframeaday. Check them all out on my other Tumblr. Fun with the Inkwell filter at Paul Rudolph’s Government Center complex in Boston. New website alexandralange.net. 25 Things You Keep In Your Life That Are Only Holding You Back 1. The phone numbers of people that never, ever call you or text you first, and often don’t even respond when you text them. 2. Mean or uncomfortable exchanges with people — either in your text or internet history — that you occasionally go over and re-read because they make you feel angry and terrible all over again. 3. The Best Architectural Websites The Top Architectural Websites in the World That sounds pretty important doesn’t it? At the very least it sounds comprehensive … it suggests an extensive and exhaustive collection of the best architecturally themed websites in the world. I’m not sure if that is this list but it is my go-to list of websites.

Dead Malls Attention, dead mall fans: this one’s for you. The following gem of a mall is almost completely dead, totally unrenovated and as dated as they come. It’s just as interesting as other deadmall icons like Southwyck, Machesney Park, Summit Place, Rolling Acres, Randall Park, or any of those, but hasn’t received nearly as much fan press. And, as of July 2010 it is still open for regular business with no imminent plans for closure. The 20 Best Architecture Tumblrs With its emphasis on all things visual, Tumblr has emerged as one of the most engaging platforms for observing architecture, ranging from the historic to the surreal. The upload-based social network is a haven for image-hoarders everywhere, with each Tumblr carefully curated to indulge a very specific craving, be it endangered Brutalism or decadent interior design. For architectural history fetishists, Tumblr has proven an unending boon.

List of Tor hidden services From Wikipedia, the free encyclopedia Hidden services directories, portals, and information[edit] The Hidden Wiki Search engines[edit] Autodesk 123D Design: 3D Modeling for the Masses Autodesk123D Design is a new free 3D modeling tool that allows users to create a digital model and then 3D print or fabricate their idea whether on the iPad, Mac, PC or via their web browser. Autodesk 123D Design helps users get their projects started by providing base shapes and example models that help move past a blank screen and into the design quickly. Using natural interactions to add objects to the canvas and assemble parts together, users can enjoy the design process and create amazing 3D-printable designs. "For the first time ever, users can create sophisticated, precise 3D models of real objects on their iPad, Mac, PC or via their web browser. People said this couldn't be done on iPad, and we're happy to prove them wrong," commented Samir Hanna, vice president of Consumer Products, Autodesk. Sponsored Links

George Orwell: "Notes on Nationalism" May, 1945 Somewhere or other Byron makes use of the French word longeur, and remarks in passing that though in England we happen not to have the word, we have the thing in considerable profusion. In the same way, there is a habit of mind which is now so widespread that it affects our thinking on nearly every subject, but which has not yet been given a name. As the nearest existing equivalent I have chosen the word "nationalism", but it will be seen in a moment that I am not using it in quite the ordinary sense, if only because the emotion I am speaking about does not always attach itself to what is called a nation -- that is, a single race or a geographical area. It can attach itself to a church or a class, or it may work in a merely negative sense, against something or other and without the need for any positive object of loyalty.

architecture/urbanism/design Hallgate, Blackheath (1960) by Eric Lyons & PartnersOne of many Eric Lyons designed schemes in Blackheath, Hallgate is situated on the former Cator estate, which was created by John Cator in the 19th Century. Like most of the others, this SPAN estate of 26 flats is arranged around landscaped gardens, and features a sculpture called “The Architect in Society” by Keith Godwin. Image from RIBApixA Guide to Modernism in Metro-Land

Embodied Cognition  Embodied Cognition is a growing research program in cognitive science that emphasizes the formative role the environment plays in the development of cognitive processes. The general theory contends that cognitive processes develop when a tightly coupled system emerges from real-time, goal-directed interactions between organisms and their environment; the nature of these interactions influences the formation and further specifies the nature of the developing cognitive capacities. Since embodied accounts of cognition have been formulated in a variety of different ways in each of the sub-fields comprising cognitive science (that is, developmental psychology, artificial life/robotics, linguistics, and philosophy of mind), a rich interdisciplinary research program continues to emerge. Table of Contents 1.