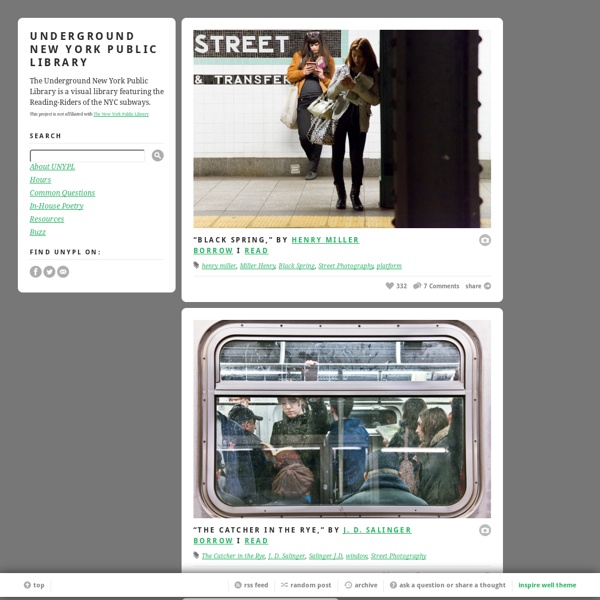 Reinier Gerritsen photographs readers on the subway in his series, The Last Book. Reinier Gerritsen, courtesy Julie Saul Gallery, New York Reinier Gerritsen doesn’t think books will be around much longer. That’s why you see them everywhere you look in his series, “The Last Book,” which is on display at New York City’s Julie Saul Gallery through Feb. 7. Like a scientist cataloging the last of an endangered species, the Dutch photographer wandered the New York City subway system for weeks, snapping pictures of readers of printed books among an increasingly dominant population of iPhone and Kindle readers.

shhh! no running in the library! libraryjournal: The Reveal: Announcing LJ’s 2015 Movers & ShakersPassion. Vision. Mission. These are just a few of the words that characterize the 50 individuals—and one organization—named 2015 Movers & Shakers. What Project-Based Learning Is — and What It Isn’t Screenshot/High Tech High The term “project-based learning” gets tossed around a lot in discussions about how to connect students to what they’re learning. Teachers might add projects meant to illustrate what students have learned, but may not realize what they’re doing is actually called “project-oriented learning.” And it’s quite different from project-based learning, according to eighth grade Humanities teacher Azul Terronez. Terronez, who teaches at High Tech Middle, a public charter school in San Diego, Calif says that when an educator teaches a unit of study, then assigns a project, that is not project-based learning because the discovery didn’t arise from the project itself. And kids can see through the idea of a so-called “fun project” for what it often is – busy work.

librar-y November 16, 1935. New Orleans photographs — 1123 Royal Street. The parting of Sir Lancelot and Queen Guinevere, 1874. Circa 1906. The bathing beach at Magnolia, Massachusetts. 21st Century Tools Through the Lens of Bloom’s Taxonomy Over this past weekend, I attended the 1st Annual Wyoming TEC Conference. TEC stands for Technology in the Evolving Classroom. During this conference, I had the fortunate opportunity to sit in on Angie Spann‘s session on 21st Century Tools. Angie is a Librarian and Media Specialist at Sweetwater School District #1. Here is the session’s abstract, “Our students need several skills to help them learn and become productive in the 21st Century.

School Library Association NSW State Library Day Details A one-day seminar featuring; Lyn Hay, Aaron Blabey & Carol Gordon. Date: Saturday 14th March, 2015 Time: 9.00am - 3.00pm Location:State Library NSW Accreditation: NSW Institute of Teachers at Proficient Teacher Level Registration Fee: $269.10 ($296.01 GST incl) SLANSW Members $299.00 ($328.90 GST incl) Non-Members Download PDF »Register now » Hey girl. I like the library too. Another good one from Sarah. Thanks J.W. (Why does the book drop have to be outside? The worst…) Neil Gaiman's Next Children's Books Announced Neil Gaiman's next childrens books have been announced, and it includes some typically offbeat titles. According to industry bible Publishers Weekly, HarperCollins will publish three novels and two pictures books by the cult author. The picture books will star a panda with a flying helmet and a giant sneeze called Chu, the first of which, punningly titled "Chu's Day", will be released on January 8th 2013. The books' illustrator, Adam Rex, unveiled the book's cover last month on his blog.

mobile.nytimes Photo Updated, March 17, 2016 | We have published a companion piece: “8 Compelling Mini-Documentaries to Teach Close Reading and Critical Thinking Skills.” Ever want your students to slow down and notice details when they read — whether they’re perusing a book, a poem, a map or a political cartoon? Young people often want to hurry up and make meaning via a quick skim or a cursory glance when a text can demand patience and focus. Closely reading any text, whether written or visual, requires that students proceed more slowly and methodically, noticing details, making connections and asking questions.

Classic Literature Confessions Just spent the last half hour looking through your blog. In love. Thank you :]