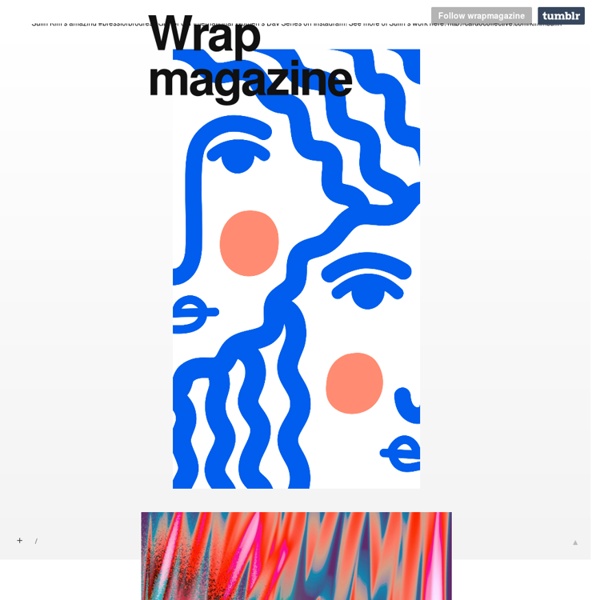 For the latest issue of Wrap we were lucky enough to be able to work with the super talented illustrator Alex Walker who created this image, ‘Cosmic Sorbet’, in response to the issues theme of balance. Alex said he made this image with quite a free-form approach to try and capture a sense of visual balance and to make something ‘process-led and fun’. Alex’s artwork is available as a pull-out print/wrapping paper in Wrap issue 11- ‘Balance’, alongside a in-depth interview with him.

What To Tell the Kids About Guns When I was about eight or nine, I found Clyde M. Narramore’s book How to Tell Your Children About Sex hidden in my dad’s closet. Presumably he had been preparing himself to “have the talk,” but I got to his crib sheet first. I poured over the chapters on “Family Dressing and Undressing,” “Learning from Nature,” and “Experimentation.” Curiously, in light of all the gun control protest today (and I’m a firm supporter) this booklet from 1957 was more egalitarian than most — ”when a boy or GIRL wants a gun.” “Come the day when the settlers on your block have routed the last redskin,” reads the first sentence of the booklet, “when your Backyard Cowboy and his trusty cap pistol have freed the neighborhood of the last rustler [or intruder], your boy — or girl — will want a gun, a real gun, one that shoots. Guns are part of American life and narrative. There are many choice tidbits of wisdom and lore (click on image to make larger).

OK Great Magazine Eng Esp Win the Business with this Elevator Pitch - Steve W. Martin by Steve W. Martin | 7:00 AM August 22, 2012 Pretend that you are in an elevator at one of your industry’s trade shows. You’re heading down to the lobby when the doors open on the thirtieth floor. You instantly recognize the executive who walks in and quickly glance at his name badge to confirm he is the CEO of the most important account you would like to start working with. So, how did you do? They use truisms: They believe their company’s own marketing pitch, which makes claims that are not considered entirely true by the listener. They describe themselves using buzzwords: They repeat industry buzzwords or, worse yet, use technical buzzwords that are known only within their company. They use fillers: They make too much small talk or ask frivolous questions that reduce their stature to the customer. They demean themselves or the listener: Their statements turn them into mere salespeople, not business problem solvers. Here’s an example of a poor elevator pitch. Hello, Norman.

Your Future Robotic Hand Will Be Able To Detect Everything From Abnormal Breast Lumps To Enlarged Lymph Nodes Bring together two engineers and a Harvard Medical School student, expose them for 10 weeks to lofty ideas about changing the world from people like X Prize Founder Peter Diamandis and futurist Ray Kurzweil, ask them to create a team project that could positively impact 1 billion people in 10 years, and what do you get? Med Sensation, a project spun out of Singularity University’s graduate studies program that aims to make your checkups at the doctor’s office more robotic. The Med Sensation glove, now in its second iteration, is outfitted with sensors that can detect vibrations, sound, and temperature--and it features an accelerometer and a buzzer system for items that require immediate attention. "If you apply too much pressure on the examined tissue, then the buzzer goes on," explains team member Elishai Ezra. The third version will come with micro-ultrasounds on the glove fingertips.

Spokes | Eclectic Pedicab Rides Mayor to Londoners: Don’t Jump Update: This ad campaign is, thankfully, a spoof. The London Underground has had rashes of suicides on the tracks. Deep tube stations have “anti-suicide pits” or “suicide pits” or “dead man’s trenches” beneath the track that enables responders to help prevent death when a passenger falls or jumps in front of a train. London Underground has a “Therapy Unit” to deal with drivers’ post-traumatic stress, resulting from someone jumping under their train. Now there is an advertising campaign designed to thwart suicides. Whether the approach works or not, only time will tell. .

How Tony Hsieh Pivoted Zappos Into A $1.2 Billion Amazon Acquisition Zappos.com launched in 1999 with a plan like that of many dot-coms birthed in the tech bubble: to be an online shoe company without ever touching a shoe. Customers would order footwear on its website, it would transmit the orders to vendors, and vendors would ship them from their own warehouses. “On paper, it was a great idea,” CEO Tony Hsieh says. But in practice, it wasn't. "As an e-commerce company, we should have considered warehousing to be our core competency from the beginning," Hsieh wrote in his book, Delivering Happiness. By 2003, 75% of sales came from its warehouse’s stock. And he bet it on his frontline agents, investing money that normally would have been spent on advertising. It worked. Hsieh never used the term “pivot” to describe his change in strategy.

When Illustrators Wanted to be Bob Peak The 1950s and ’60s were a time when most wanna-be illustrators wanted to be Bob Peak. It was also the moment when illustration was at a crossroads. Would it continue to merely serve or illuminate a text, or would it say something more? Since the emerging editorial themes (war, peace, race, etc.) were more socially and metaphorically charged, the substance and style of illustration could no longer be entirely realistic. Certain levels of abstraction were filtered into the American illustration vocabulary, and by the mid-’60s, illustration was made of varied dialects—representing retro to futuristic with various substrata in between. Peak was a bridge between the representational and the conceptual, between the Rockwellians and Magritte-ians. A tectonic shift was pushing illustration from the dominant visual medium to a subsidiary one. Peak also developed identities for films in posters for My Fair Lady, Camelot, Star Trek, Apocalypse Now, In Like Flint, Modesty Blaise, and Rollerball. .

Do Like Steve Jobs Did: Don't Follow Your Passion In June 2005, Steve Jobs took the podium at Stanford Stadium to give the commencement speech to Stanford's graduating class. Wearing jeans and sandals under his formal robe, Jobs addressed a crowd of 23,000 with a short speech that drew lessons from his life. About a third of the way into the address, Jobs offered the following advice: You've got to find what you love…. [T]he only way to do great work is to love what you do. When he finished, he received a standing ovation. Steve Jobs--a guru of iconoclastic thinking--put his stamp of approval on an immensely appealing piece of popular career advice, which I call the passion hypothesis: The key to occupational happiness is to first figure out what you're passionate about and then find a job that matches this passion. This hypothesis is one of modern American society's most well-worn themes. Do what Steve Jobs did, not what he said It was with this mindset that later that same year, Jobs stumbled into his big break.

The Unsung Art Of Patent Drawings The U.S. Patent and Trademark Office, at 176 years old, has granted patents to some of the most important inventions in American history. It’s also granted some of the dumbest (see: Patent 5,865,192 for a Self-Haircutting Guide Apparatus). All told, the office has approved more than 8 million patents (and rejected countless more). At one time, patent applicants had to submit a physical model of their invention. As judge Richard Posner recently commented in The Atlantic, patent law is in something of a crisis these days. Patent law, like all law, is a complex pressure valve, since it must satisfy two competing interests. As patent law--and by proxy, patent art--edges its way into pop culture, we’ve found ourselves drawn to the U.S. Patent 112,550: Creeping Baby Doll This 1871 patent for a mechanical crawling doll was accompanied by a fairly terrifying working model. Patent 1,475,024: Traffic Signal Patent 2,708,656: Neutronic Reactor Patent 3,005,282: Toy Building Block