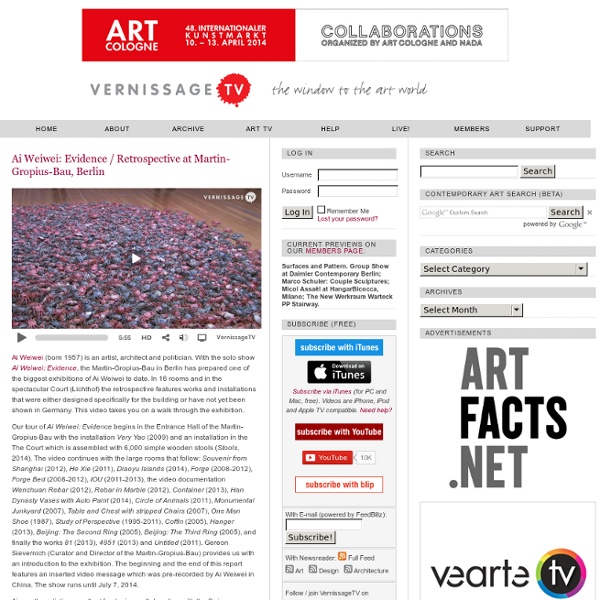 Frieze Art Fair New York New Opening Hours Friday, May 10 11am–7pm Saturday, May 11 11am–7pm Sunday, May 12 11am–7pm Monday, May 13 11am–6pm Last entry one hour before closing. Timed entry for groups. Admissions Mat Gleason: What Artists Need to Know About Gallerists Staying Current I made the leap from critic to curator, but not from writer to non-writer. My decision to open a contemporary art gallery in Los Angeles was as much a case of cabin fever as it was a love of putting art shows together. There is plenty to write about on this adventure through the inner workings of it all.

Garry Winogrand's Touring Exhibition The first retrospective in 25 years of work by artist Garry Winogrand—renowned photographer of New York City and of American life from the 1950s through the early 1980s —will debut at the San Francisco Museum of Modern Art (SFMOMA) in spring of 2013. Jointly organized by SFMOMA and the National Gallery of Art, Washington, Garry Winogrand is conceived and guest-curated by the photographer and author Leo Rubinfien, who was among the youngest of Winogrand’s circle of friends in the 1970s. As initiating curator, Rubinfien will work closely on the project with Erin O’Toole, assistant curator of photography at SFMOMA; and Sarah Greenough, senior curator of photographs at the National Gallery of Art. Though widely recognized as one of the preeminent photographers of the 20th century, Winogrand’s work remains largely unexplored and incompletely published. In conjunction with the retrospective, SFMOMA will publish a catalogue with essays by Rubinfien; Sandra S.

Electronic Arts Intermix : Introduction Introduction Founded in 1971, Electronic Arts Intermix (EAI) is a nonprofit arts organization that is a leading international resource for video art and new media. EAI's core program is the distribution and preservation of a major collection of over 3,500 new and historical video works by artists. For over 37 years, EAI has fostered the creation, exhibition, distribution and preservation of video art, and more recently, digital art projects. FABRICATE 0.9 Fabricate – Waffle Structure: Type 03 – For existing intersecting surfaces This cluster component takes a perpendicular planar surfaces from Rhino and creates notches for fabrication and assembly. 3.0 Waffle For Intersecting Srf 0.8 Fabricate – Waffle Structure: Type 02 – For a Solid This cluster component takes a solid geometry and divides it in perpendicular directions.

About Art21 Over the past decade, Art21 has established itself as the preeminent chronicler of contemporary art and artists through its Peabody Award-winning biennial television series, "Art in the Twenty-First Century." The nonprofit organization has used the power of digital media to introduce millions of people of all ages to contemporary art and artists and has created a new paradigm for teaching and learning about the creative process. In addition to its PBS series, Art21 produces short-format documentary series, viewable on multiple online platforms. The "Exclusive" series highlights the artists previously featured in the PBS series. Art21’s first feature film, titled "William Kentridge: Anything Is Possible," premiered in national primetime on PBS in October 2010. This one-hour film has been broadcast internationally and can also be viewed online.

Shortlist 2012 - Future Generation Art Prize From 13 January till 12 April 2014 PinchukArtCentre to present the Exhibition of 21 Shortlisted Artists for the Future Generation Art Prize 2012 watch the photo gallery of the works and video profiles of the artists → Jonathas de Andrade, Brazil, the Special Prize winner Jonathas de Andrade was born in 1982 in Maceió and lives and works in Recife, Brazil. De Andrade’s work has been commissioned for significant group exhibitions including the 29th Biennial of São Paulo (2010), the Sharjah Biennial 10 (2011), the 12th Istanbul Biennial (2011) and The Ungovernables, New Museum Triennial, New York (2012). Itinerant Street Art Gallery Motivation plus commitment multiplied by guts divided by determination equals talent. Or maybe it’s just a matter of simply doing what feels right, the right way at exactly the right time. Whatever your personal angle on how to define this particular term might be, it definitely happens just once in a blue moon to discover a talent whose vision is so peculiar and overall distinctive at an early stage already, as the one Berlin-based artist Vermibus is bringing to the table. Since the first collaboration between Vermibus and OPEN WALLS Gallery in 2012, the enigmatic artist certainly has stepped up his game in terms of execution and presence, even though the instruments he’s using remain the very same: solvent, paper and a trusted skeleton key. Unveiling Beauty is a visual manifest about removing all these superficial layers life is lulling you with, showing that sometimes the radical act of deconstruction is a necessary one to let true beauty reign supreme again.

artists and art modern & contemporary visual artists What is Modern Art? text-align:justify; For centuries artists enjoyed their place serving the Church, the aristocracy and current public conventions or tradition.