YOU'RE ALL JUST JEALOUS OF MY JETPACK 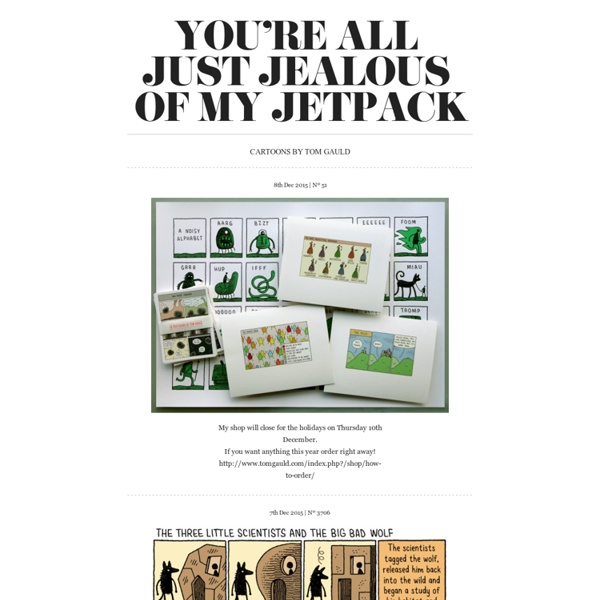 VM8246 – Vimrod Welcome. This site is no longer being updated! Vimrod's new home is lastlemon.com/vimrod The Oatmeal: Grammar Comics This is a grammar comic about the proper usage of who versus whom. A look at the meaning of "flushing out an idea." This comic will LITERALLY make butterflies explode out of your underpants. A guide explaining when to use i.e. instead of e.g. A little bit ironic, dontcha think?

Adorable, Round Owls Illustrated As Superheroes, Other Pop Culture Icons “Batmanulka” Krakow-based graphic designer and illustrator Magdalena Ruta has recreated your favorite superheroes and characters as owls. Her adorable creations, called ‘Sowulka’, depict plump, rounded, big-eyed owls dressed up as characters like Batman, Darth Vader, and Sherlock Holmes. web > web economy bullshit generator Here's what the critics are saying: Your site is brilliant! The bullshit generator made me feel right at home!— Josh K. I love the web bullshit generator. Unusual articles This page is for Wikipedians to list articles that seem unusual. These articles are valuable contributions to the encyclopedia, but are a bit odd, whimsical, or something you would not expect to find in Encyclopædia Britannica. We should take special care to meet the highest standards of an encyclopedia with these articles lest they make Wikipedia appear idiosyncratic. If you wish to add articles to this list, the article in question should preferably meet one or more of these criteria:

The Null Device The results of Eurovision 2014 are in, and, as reported here, the big winner was Austria's Conchita Wurst, a bearded drag performer, with a resolute and melodramatic torch song titled Rise Like A Phoenix. Wurst (whose real name is Tom Neuwirth) won a runaway victory, with 290 points and a string of 12s, including ones from countries who might otherwise haver found a bearded drag performer too transgressive. The runner-up was the Netherlands, 52 points behind with a rather nice piece of slow-burning Americana. 2014 was arguably the most geopolitically charged Eurovision Song Contest in years, if not decades; the kitschy music equivalent of the World Chess Championship of 1972, in that, within its formalised, tightly circumscribed arena, the tensions of an active geopolitical fault line manifested themselves.

According to Math, the Worst Color Shirt to Wear on Star Trek Is Actually Yellow It’s a well known maxim that nobody wants to be a redshirt on Star Trek: The Original Series. The proud members of Operations, Engineering, and Security are the space-expendables, the first line of defense, the… well the ones who always get sent down with the away party full of more important characters and get murdered by the space monster of the week. Like, all the time. But what if, instead of considering this from the viewer’s perspective, you considered it from the perspective of a crewman choosing a line of work? Nobody cares “I care.” Nobody cares is a policy employed by dictators, despots, democracy, the general public, and the wiki administration. It would be considered the largest epidemic facing the world today if it weren't for the fact that nobody gives a flying cow about epidemics. Origins in Ancient Greece The school of thought began when somebody wanted something and nobody really wanted to do anything about it, or something.

Humorist Bruce Jay Friedman Is One Lonely Guy—as Anyone Can Plainly See Loneliness is expensive. It takes a lot of money to keep it going. You need throw pillows. You've got to have cookies, liverwurst sandwiches. You have to have a TV set to lull you to sleep. On A Presentable Brown Hat Posted by Jeremy Stangroom on September 27, 2012 Just because it amused me, here’s an exchange of letters between Bronislaw Malinowski (anthropologist, proto-accommodationist) & Bertrand Russell (philosopher, advocate of nuking the USSR). Dear RussellOn the occasion of my visit to your School I left my only presentable brown hat in your anteroom. I wonder whether since then it has had the privilege of enclosing the only brains in England which I ungrudgingly regard better than mine; or whether it has been utilised in some of the juvenile experimentations in physics, technology, dramatic art, or prehistoric symbolism; or whether it naturally lapsed out of the anteroom.If none of these events, or shall we rather call them hypotheses, holds good or took place, could you be so good as to bring it in a brown paper parcel or by some other concealed mode of transport to London and advise me on a post card where I could reclaim it? Russell’s reply: