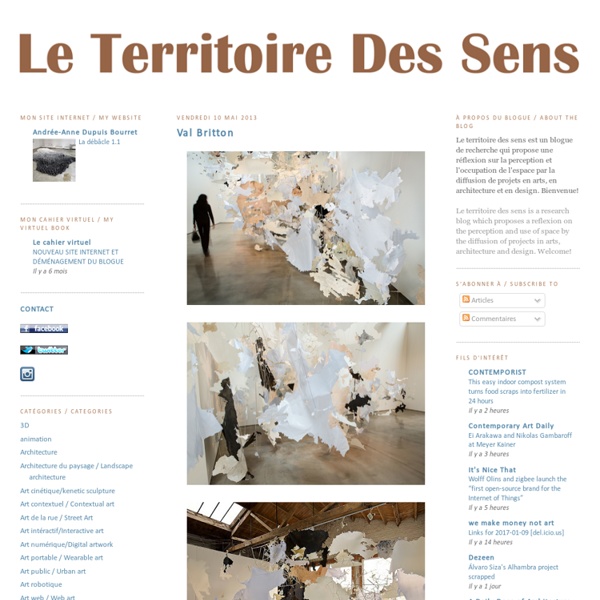 ANNE LASS Often it takes a seconded glance to grasp the essence of reality that surrounds us, without going too far. It helps to step aside and to start watching again, putting between ourselves and the world the right distance to view it in full, or at least see the single part that tell us much more. The shots of Anne Lass have the rare and precious gift of synthesis, and a power of communication that goes hand in hand with the undeniable aesthetic appeal that they move deep in the observer. The Geography of Nowhere project, undertaken in the United States where the German photographer resided for a couple of years, is a striking example. «In my work», Anne Lass confirms, «I try convert my personal impression of portions of the United States living space into a panopticon of what I like to call absence of self-determination.

Material Archive: Installation Art Several years ago, at the Toronto Outdoor Art Exhibition, I bought a Courtney Love doll that sits on the ledge of my bed. She has a tag that reads: "Don't date the captain of the football team, be the captain of the football team." --- Courtney Love Needless to say, that quote makes me smile everytime – Last week, I was super excited when I came across Tina Turner in similar form at The Drake General Store – another "Action Figure" from Suzie Smith. Below is a exerpt from her site on the series: "Action Figures is a series of screen-printed dolls of famous people who I find iconic and inspirational.

Le jardin partagé est-il un paysage ? The notions of territory and landscape have many meanings and usages. In this article, stress is laid on the social dimension of the landscape as conveying a representation of the world and of itself in the world. Unlike territory allotted for a use, the landscape is supposed to produce an image that reflects a vision of the territory. This approach puts those who produce the landscape at its centre. Pixelsumo by Chris O'Shea Alphabet from Keita Takahashi and Adam Saltsman is a charming but very hard game. Press a corresponding key on your keyboard to make a letter character move and jump, getting them all to the end of the level. Lovely soundtrack too.

map and art "Art is a form of exploration, of sailing off into the unknown alone, heading for those unmarked places on the map."sais the writer Michael Chabon and presents his concerns "If children are not permitted—not taught—to be adventurers and explorers as children, what will become of the world of adventure, of stories, of literature itself?" via platial "Most great stories of adventure, from The Hobbit to Seven Pillars of Wisdom, come furnished with a map.

2011-09 by, Eti Esther Naor Detail view from the Installation. This wonderful, powerful exhibition, takes place from today at Florentin 45, in Tel Aviv. Red wax stalactites drip out of hanging white gauze clothes, creating a poignant sculptural installation. The work captures the viewer within its wall, leading him into the heart of an unresolved experience: Is it an outdoor news-breaking violence scene, or is it an opening to a place of inner pain that spreads out like an ancient landscape, wishing to touch the indescribable? Ei Esther Naor continues to explore in her new work the different manners in which matter can embody evasive contradicting feelings as eroticism, fear, beauty and suffering.