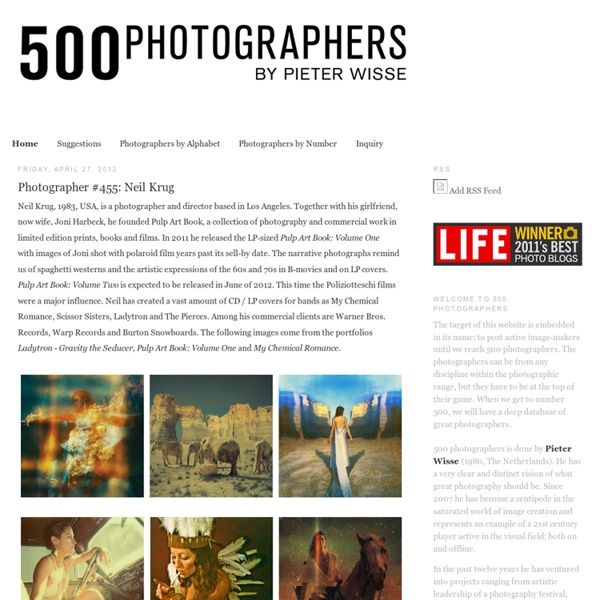 I have just arrived in Portland, Oregon where I am invited to review portfolio's in the next four days at the PhotoLucida Portfolio Reviews. Already I have had the pleasure to meet several photographers that are on this website. After the intense four days of reviewing I will be heading to Los Angeles. Mopla (Month of Photography Los Angeles) invited me to create a special projection to be shown on April 25 and 27, which is also the closing night party. I have chosen the theme Sublime & Divine; A Painter's Eye. If you are in the neighbourhood, make sure to check it out.

50 free Photoshop actions Adobe's flagship image-editing software Photoshop has a powerful programming language built-in that allows you to record tasks as an 'action' and replay the steps to complete the task automatically. Not only can you record your own but you can also import actions, opening up a whole range of effects and time-saving options – whether you're using an older CS or have signed up to the very latest Creative Cloud version. So to add to our collections of Photoshop plugins and Photoshop resources, here are some great Photoshop actions that are free to download and install, for photographers, graphic designers, game artists and more. You can jump to the section you want from the menu below, but you should definitely check out the entire list – who knows where inspiration will strike! Photo filters 01.

30+ Crazy Photographers Who Will Do ANYTHING For The Perfect Shot Getting the angle and perspective for a photo just right can sometimes be very tricky, but these crazy photographers don't mind – when it comes to taking the perfect shot, they will do whatever it takes. The acts of devotion to their craft that some of the world's best photographers perform can be truly outstanding. Wildlife photographers have spent weeks camped out in the wild, allowing animals to get accustomed to their presence so that they can get the rare or intimate glimpses at their lives that others only dream of.

Nikon FM - Wikipedia The Nikon FM is a mechanically operated, interchangeable lens, 35 mm film, single-lens reflex (SLR) camera. It was manufactured in Japan between 1977 and 1982 by Nippon Kogaku K. K. (now Nikon Corporation). History[edit] The FM was the replacement for Nikkormat FT3, which had been introduced only a few months prior. Conscientious Articles Contemporary Photographers Diane Meyer May 6, 2013 – According to the artist, Diane Meyer’s Time Spent That Might Otherwise Be Forgotten “is based on photographs taken at various points in my life and arranged by location. Sections of the images have been obscured through a layer of embroidered pixels sewn directly into the photograph.

40 best retro and vintage Photoshop tutorials - RetroSupply Co One of the best ways to stay fresh, relevant and in-demand as a designer or illustrator is to learn from other talented creatives. Whether you’re a beginner or a pro, it’s important to continually sharpen your skills – so to help you level up, we’ve scoured the web to bring you the very best retro and vintage tutorials for Photoshop. To make navigation easier, we’ve divided the tutorials into the following categories: techniques, styles, typography, posters, photography, and retro and vintage tutorials that involve both Photoshop and Illustrator. There’s no time like the present for learning new skills. Scroll down to start adding new strings to your creative bow – or bookmark this page for when you’re next able to invest a little time into growing your skill set. Trust us, your future self will thank you!

Eight Norwegian Photographers You Need to Follow The Norwegian Journal of Photography (NJP) has released the latest issue of its biennial survey of the Scandinavian country’s contemporary documentary photography scene, showcasing the work of eight photographers. The publishers — photographers and photo editors Rune Eraker, Laara Matsen and Espen Rasmussen — combed through close to 100 applications and submissions to arrive at its final list of eight photographers, using funding from the Fritt Ord Foundation, a non-profit devoted to freedom of expression, to produce the high-quality book. “We look for strong voices,” Espen tells TIME, “and we also look for photographers who challenge the term ‘documentary photography’. Do they have a style, something to tell us, do they surprise us or challenge us?

Photojournalism — Brent Stirton KIKA, CAMEROON, JULY 2010: Members of the Baka Pygmy tribe, the original forest dwellers of the Cameroon forests, Kika, Cameroon, June 9, 2010. The Baka have small logging concessions of their own in community forest areas but are plaughed by a lack of education, logging equipment, access to markets and an addiction to alcohol fostered by their Bantu neighbours who ruled them for many years and who often pay the Baka for labor in alcohol. Logging roads and subsequent small towns created by logging concessions are bringing man and infrastructure further into the forest of Cameroon than ever before, Kika, Cameroon, June 5, 2010. This is severely threatening the great forests of the Congo Basin, one of the last great Forest reserves in the world.

This Incredible Flower Timelapse Took 3 Years and 8TB of Photos to Create Filmmaker Jamie Scott made his name in the timelapse space with Fall, a Central Park timelapse of epic proportions that took 6 months of dedication to capture. And yet his followup timelapse, titled Spring, somehow puts his first creation to shame. Spring is the flower timelapse to end all flower timelapses. HMAb — HeatherMortonArt buyer One of my favourite things about this show is that it includes so much variety. Subject matter, technique and of course style- the show is a lovely mixture. Plus, it represents photographers in very different places in their careers. Established shooters like Lee Towndrow are showing fantastic work that warrants more attention. But it’s also thrilling to be include new shooters like Rodrigo Daguerre.

How to Remove Fungus from a Lens There’s nothing quite so frustrating as discovering a lens you own has developed a bad growth of fungus on the internal elements. Lens fungus is commonly found in older lenses. It is indiscriminate of brand, build-quality, or price tag. If humidity stays in your lens for too long, the dreaded fungus may appear. I’ve spoken to a number of people who’ve shared with me their personal attempts to try to clean it off using various lens cleaners and cloths. Gregg Segal By continuing to visit this site you agree to our use of cookies. Learn more Un-Daily Bread Daily Bread

This Picture Shows How Aperture, Shutter Speed, and ISO Affect Your Photos Here’s a helpful little infographic that has been floating around the Web. It’s a simple look at how the “exposure triangle” — aperture, shutter speed, and ISO — affect the outcome of photographs. It’s not a complete picture, of course (for example, it doesn’t say why you’d ever choose a higher ISO versus a lower one), but it could be a nice illustrated reference for those just starting out in photography.