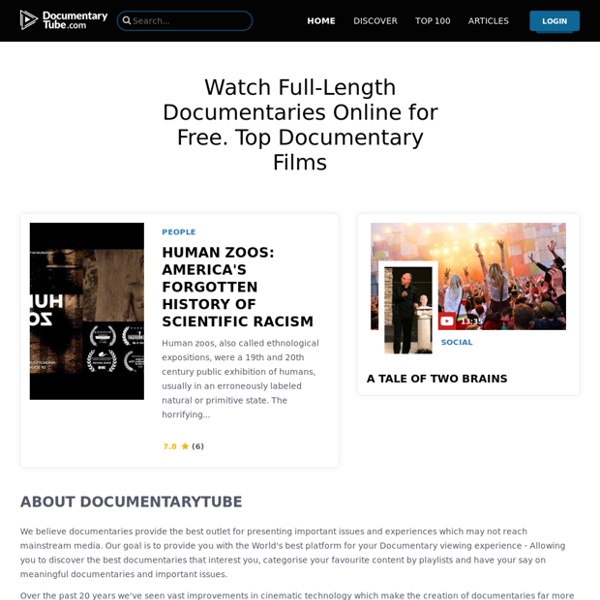 Four Horsemen Four Horsemen is a bare-bones documentary about how we can restart the world's economy. 23 international thinkers, government advisors and Wall Street money-men break their silence[...] Watch Documentary Online Now Documentaries : Defined Documentary films constitute a broad category of nonfictional motion pictures intended to document some aspect of reality, primarily for the purposes of instruction or maintaining a historical record.A 'documentary film' was originally shot on film stock — the only medium available — but now includes video and digital productions that can be either direct-to-video, made as a television program or released for screening in cinemas. "Documentary" has been described as a "filmmaking practice, a cinematic tradition, and mode of audience reception" that is continually evolving and is without clear boundaries. - http://en.wikipedia.org/wiki/Documentary_film

D.I.Y. or Die: How to Survive as an Independent Artist D.I.Y. or Die: How to Survive as an Independent Artist is a low-budget documentary film released by Music Video Distributors in 2002.[1] The film is a "celebration of the underdog" and deals with why artists do what they do, regardless of the lack of a continuous paycheck. The DVD was released (under the title "D.I.Y. or Die: Burn This DVD") with no region restrictions or copy protection. Director Michael W. Documentary List - The best documentaries to watch online The Viking Warriors The Vikings (from Old Norse víkingr) were seafaring north Germanic people who raided, traded, explored, and settled in wide areas of Europe, Asia, and the North Atlantic islands from the late 8th to the mid-11th centuries. The Vikings employed wooden longships with wide, shallow-draft hulls, allowing navigation in rough seas or in shallow river waters. The ships could be landed on beaches, and their light weight enabled them to be hauled over portages.

Authentic video in the classroom: Ireland II My second example of utilising authentic video in the EFL classroom is based on the same 50-minute travel video as my first. Of course, one can apply this to any video, but this time I will stick with Ireland. How I do it now will, however, differ from my last post because now I’ll concentrate on the language and vocabulary awareness in detail (but I wouldn’t use both methods on the same video in the same class, though). This approach is, however, associated with a lot of painstaking preparatory work for the teacher, because transcription of the video material needs to be done, at least for some of the clips. It takes about 1 hour to take down 5 minutes of video material, so one needs plenty of time to get a complete transcript. War Made Easy: How Presidents and Pundits Keep Spinning Us To Death In real time, officials have explained and justified these military operations to the American people by withholding crucial information about the actual reasons and potential costs of military action again and again, choosing to present an easier version of war's reality; a steady and remarkably consistent storyline designed not to inform, but to generate and maintain support and enthusiasm for war. War Made Easy reaches into the Orwellian memory hole to expose a 50-year pattern of government deception and media spin that has dragged the United States into one war after another from Vietnam to Iraq. Narrated by actor and activist Sean Penn, the film exhumes remarkable archival footage of official distortion and exaggeration from LBJ to George W.

100 Best (Free) Science Documentaries Online No matter how much you know, there is always something new to learn about science. While your college courses may cover the basics, you can get a more in-depth look at a wide variety of topics from Internet resources such as these great documentaries. These selections will help you explore everything from the inner reaches of the human mind to the outer areas of our universe and just about everything else in between. Better yet, they’re all free to watch online so you can learn more without spending a dime. Must Watch Documentaries About The U.S. Real Scientific Evidence of Controlled Implosion "The preconceived notion of NIST is that there's no evidence for explosives, as in there is no point in looking. That is the most unscientific thing which you can possibly think of. Not to look because you don't expect to find evidence and in fact the evidence is overwhelming. They state these conclusions for which there is no evidence and then they ignore conclusions that can be drawn from the evidence." -Lynn Margulis, PH.D, Scientist/Professor, University of Massachusetts