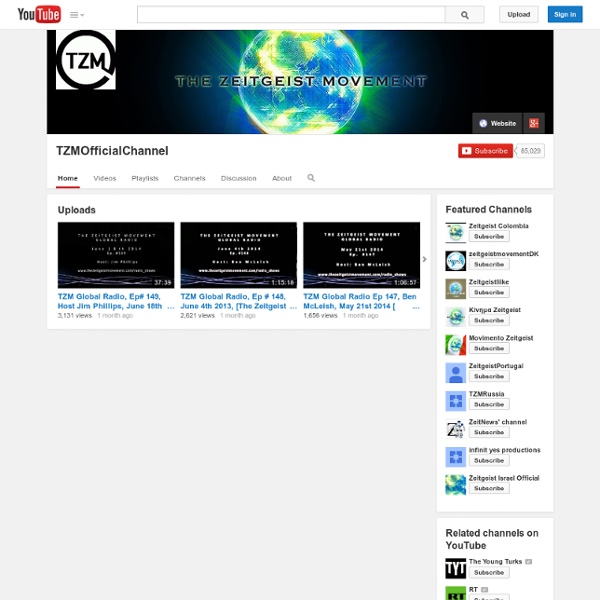 Starting Over In his famous , Richard Feynman presented this interesting speculation: Fascinated by Feynman’s question, Seed put a similar one to a number of leading thinkers: “Imagine—much as Feynman asked his audience—that in a mission to change everyone’s thinking about the world, you can take only one lesson from your field as a guide. In a single statement, what would it be?” Here are their answers:

Zeitgeist Information The Zeitgeist Movement Official Blog Welcome! Read Me :) Being Somewhere - Low Impact Living "Who Are You Protecting?" Freedom of Speech, freedom of assembly, and freedom of the press. These legal rights, guaranteed to United States citizens by the first amendment, are essential to our free democracy. It has allowed for several national revolutions, such as movements for black and female suffrage, to change public opinion and national tradition. Occupy Wall Street was originally a public demonstration for the grievances most people share across the modern world; Americans are losing faith in our democracy as they suffer from unequal distribution of wealth, unreasonable devaluation of our currency by the Federal Reserve, and corporate involvement in our government. The protestors stay at New York City’s Zuccotti Park, sleeping in tents at night despite the frigid winter New York is currently experiencing to demonstrate the seriousness of America’s economic problems. Members of credentialed press were also arrested during a police raid of the occupy camp in the early hours of November 15th.

Ayn Rand | Ayn Rand, Objectivism, and Individualism Ayn Rand is America’s most controversial individualist. She was a bold woman who produced brilliant works fusing fiction and philosophy. Her best-selling novels, like Atlas Shrugged and The Fountainhead, have sold millions of copies and continue to influence independent thinkers and celebrities the world over, from Wikipedia's Jimmy Wales to Angelina Jolie and Hugh Hefner. My philosophy, in essence, is the concept of man as a heroic being, with his own happiness as the moral purpose of his life, with productive achievement as his noblest activity, and reason as his only absolute. — Ayn Rand, Appendix to Atlas Shrugged Rand cut a striking figure, with her long-stemmed cigarette holder and intense gaze. She penned philosophical non-fiction works of such originality and power that she was credited by a small group of stunned intellectuals as having single-handedly solved an ancient philosophical puzzle. The new philosophy which she founded through her books and essays is called Objectivism.

Welcome to the Frontpage