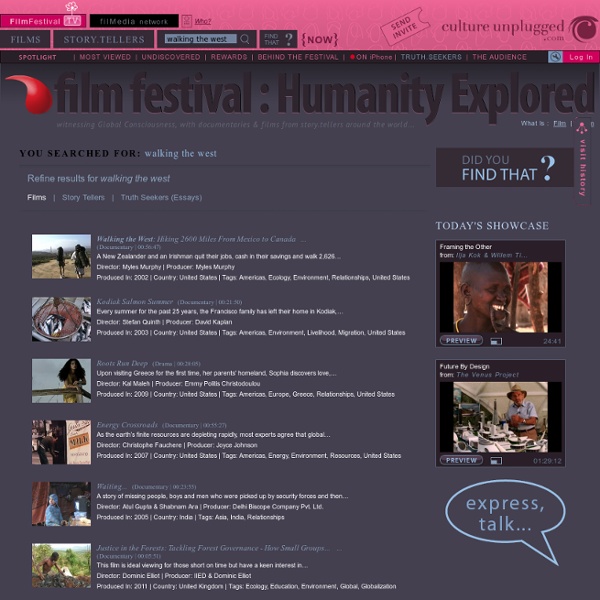 Best World War 2 Documentaries Thanks to the valiant efforts of television producers the world over (and a few dubious cable channels), you don't have to learn about the past through books. Instead, you can sit back, relax and have your history accompanied by genuine footage from the time. This is my list of the best World War 2 documentaries you can buy: some great series haven’t been released. 1. World at War: The Complete Set 8 Overlooked Useful YouTube Tools When most people think about YouTube they think sharing videos and or about all of the videos they can discover. Most people don't think about the useful editing tools that are built into YouTube. The YouTube video editor has some useful features for teachers and students. 1. Create photo slideshows. The YouTube photo slideshow creation tools allow you to specify the length of time that each image is displayed for.

The Cost of a Coke Coca Cola, we've found out, has actually been cooperating with paramilitaries in Colombia to execute workers in their own bottling plants that are trying to form unions and trying to demand better working conditions. So we've been able to bring this to the attention of Universities and say 'if Coca Cola doesn't stop doing this and if Coca Cola doesn't adopt different practices, then our University is no longer willing to have anything to do with Coca Cola. In the world of the Coca-Cola Company, whenever there's a union there's always a bust, whenever there's corruption there's always the real thing, yeah!! Justice Productions second release, The Cost of a Coke: 2nd Edition is the updated version to Matt Beard's first documentary, The Cost of a Coke.

End of Liberty End of Liberty exposes from a real life perspective how the U.S. is headed for a complete societal collapse. All Americans are now experiencing countless warning signs on a daily basis that a societal collapse is near. Unfortunately, most Americans don't understand the significance of these warning signs. Each warning sign by itself doesn't appear to have a lot of meaning, but together these warning signs present a very detailed picture of the current state of the U.S. economy and where this country is soon headed. The documentary is over an hour long and features Gerald Celente, the most accurate trends forecaster in U.S. history.

LEAKED NORTH KOREAN DOCUMENTARY ‘EXPOSES WESTERN PROPAGANDA’ (AND IT’S SCARY HOW TRUE IT IS) Sabine is a YouTube user who, during a visit to family living in South Korea in April of this year, was given a DVD by a man and a woman claiming to be North Korean “defectors”, and was asked to translate the film so it could be posted on the internet and reach a wider audience. What the DVD turned out to be was something much more than Sabine, or anyone else, probably would’ve imagined, and something that certainly has found a widespread audience on the internet over the last month or so – it was a film called “PROPAGANDA”, a documentary about capitalism, imperialism, mass manipulation of western culture for the purpose of commodification, and how it permeates every aspect of the lives of blissfully ignorant, borderline zombie masses. And jesus, is it on the fucking money. From the video’s description -

Top 10 Shocking Documentaries Movies and TV As a visual medium, documentaries frequently succeed in portraying the unimaginable far better then any book alone could do. Beaming everything from the consequences of child abuse to the horrors of nuclear warfare into the homes of millions, the following infamous documentaries shock the viewer and challenge perceptions. Please note: Almost all the videos featured contain graphic and disturbing content, relevant to the topic at hand. Assange: Facebook, Google, Yahoo are Spying Tools In Julian Assange’s exclusive interview with RT he discusses everything from the uprisings in MENA, to his extradition fight, the Guantanamo and US Cable files, his relationship with The Guardian and The New York Times, global political youth movements, the current state of mainstream media and Bradley Manning. He famously warns that social media and in particularly Facebook, Google, Yahoo are among the greatest spy machines ever invented. Once again Mr.

Microscopic Sea Creatures By Daily Mail Reporter Updated: 16:31 GMT, 30 September 2010 Bobbing away in the dark depths of the ocean, these tiny creatures display a unique beauty that few get to truly appreciate. And the latest publication by a scientist who studies these microscopic animals is set to become an unlikely bestseller - all thanks to the beauty of plankton. His coffee table book about the amazing life forms that live unseen in the oceans has dozens of remarkable photographs taken through a microscope. Amazing life forms: Dr Richard Kirby's passion for plankton has led to a set of marvellous pictures which feature in his book Ocean Drifters, a secret world beneath the waves like these tiny Jellyfish