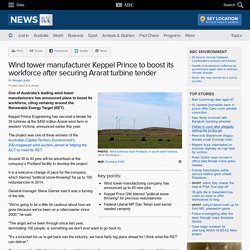 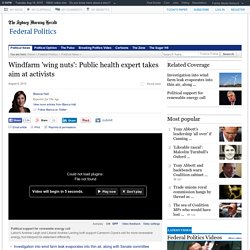 Investigation into wind farm leak evaporates into thin air, along with Senate committee An independent Senator has compared opponents of wind farms to people who raised concerns about the dangers of thalidomide, which was later linked to the deaths of 2000 children and birth defects in more than 10,000 infants. The drug, which was marketed as a remedy for morning sickness, was withdrawn from the market in 1961. Victorian Senator John Madigan made the comments in response to public health expert Simon Chapman, who delivered a scathing assessment of anti-windfarm activists, likening them to people who believe in aliens, reincarnation and other "irrational...nonsense or faith-based beliefs". Professor Simon Chapman. Renewable energy: Senate inquiry push to slash wind farm subsidies will 'destroy sector' David Leyonhjelm is leading the Senate inquiry alongside John Madigan and Bob Day. 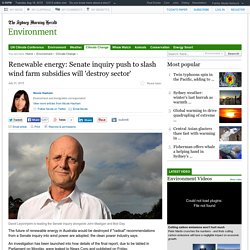 The future of renewable energy in Australia would be destroyed if "radical" recommendations from a Senate inquiry into wind power are adopted, the clean power industry says. An investigation has been launched into how details of the final report, due to be tabled in Parliament on Monday, were leaked to News Corp and published on Friday. 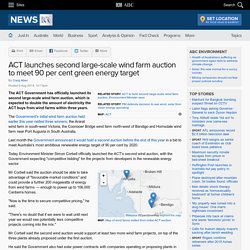 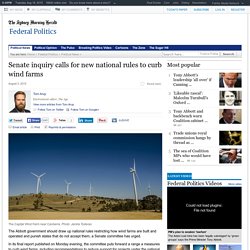 Photo: Jamila Toderas The Abbott government should draw up national rules restricting how wind farms are built and operated and punish states that do not accept them, a Senate committee has urged. Error Page. Friends of the Earth (Melbourne)'s renewable energy campaign. Australia's renewable energy investment grinds to a halt.

Australia's large-scale renewable energy industry has entered an investment freeze, with just one project securing finance in the past six months amid political uncertainty, according to Bloomberg New Energy Finance. 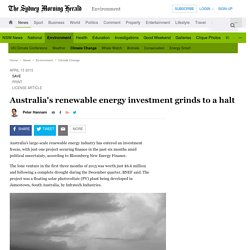 The lone venture in the first three months of 2015 was worth just $6.6 million and following a complete drought during the December quarter, BNEF said. The project was a floating solar photovoltaic (PV) plant being developed in Jamestown, South Australia, by Infratech Industries. For the year to March, investment totalled $206.9 million, which was 90 per cent lower than the previous 12 months, the consultancy said. Get Involved. Tony Abbott agrees windfarms may have 'potential health impacts'

Tony Abbott finds windfarms visually awful and agrees they may have “potential health impacts”, and says the deal on the renewable energy target was designed to reduce their numbers as much as the current Senate would allow. 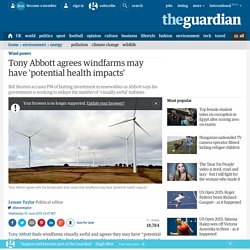 Speaking to the Sydney radio host Alan Jones – a long-term windfarm critic – the prime minister said: “I do take your point about the potential health impact of these things … when I’ve been up close to these windfarms not only are they visually awful but they make a lot of noise. “What we did recently in the Senate was to reduce, Alan, capital R-E-D-U-C-E, the number of these things that we are going to get in the future … I frankly would have likely to have reduced the number a lot more but we got the best deal we could out of the Senate and if we hadn’t had a deal, Alan, we would have been stuck with even more of these things … 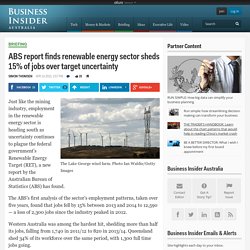 Queensland shed 34% of its workforce over the same period, with 1,300 full time jobs going. The ABS report, which spans 2009-10 to 2013-14, found the sector grew 41% between 2009 and the 2012 peak to 14,890 FTE workers. The data comes as Coalition government and ALP opposition continue to fight over a revised mandatory RET, which currently sits at 41,000 gigawatt hours to reach 20% renewables by 2020. Tony Abbott has escalated his war on wind power. On the edge: the federal government is limiting investment. 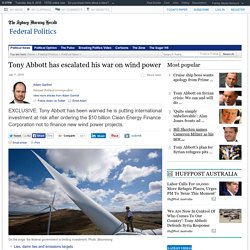 Photo: Bloomberg Lies, damn lies and emissions targets Tony Abbott has dramatically escalated his war on wind power, creating a new cabinet split and provoking a warning he is putting international investment at risk. How the power of suggestion generates wind farm symptoms. A surge in health complaints linked to wind farms could owe more to increased discussion of health risk than the low-level sound generated by the actual turbines, according to a new study. 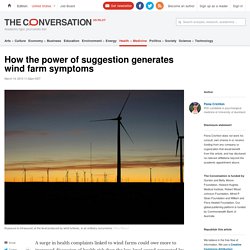 The study by University of Sydney’s Professor Simon Chapman shows health complaints in Australia were rare until reports emerged about the purported health risks of living close to wind farms. Increased numbers of people reporting symptoms linked to turbines could be explained by public warnings about health effects triggering the complaints; a phenomenon known as the nocebo effect. This occurs because such information can create health concerns and related symptom expectations, priming people to notice and negatively interpret common physical sensations and symptoms.