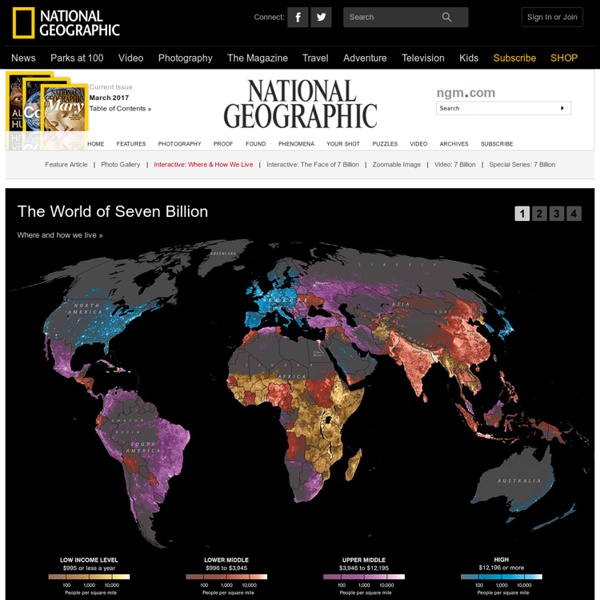 The World of Seven Billion The map shows population density; the brightest points are the highest densities. Each country is colored according to its average annual gross national income per capita, using categories established by the World Bank (see key below). Some nations— like economic powerhouses China and India—have an especially wide range of incomes. But as the two most populous countries, both are lower middle class when income is averaged per capita.

National Geographic Photo Contest 2011 - Alan Taylor - In Focus National Geographic is currently holding its annual photo contest, with the deadline for submissions coming up on November 30. For the past nine weeks, the society has been gathering and presenting galleries of submissions, encouraging readers to vote for them as well. National Geographic was kind enough to let me choose among its entries from 2011 for display here on In Focus. Gathered below are 45 images from the three categories of People, Places, and Nature, with captions written by the individual photographers. [45 photos] Use j/k keys or ←/→ to navigate Choose: Many people pilgrimage to Uluru, but what is seen there often depends on where you've come from. Steve Jobs: Parting Quotes For Today's Entrepreneurs By now you've likely heard that Steve Jobs has resigned as CEO of Apple and plans to continue as chairmen of the board. COO, Tim Cook, who has filled in for Jobs in recent years during his various medical leaves while he first battled pancreatic cancer and then recovered from a liver transplant, will step in as CEO. There is much to be analyzed and reported on regarding this announcement. Every newspaper, blog and tech news outlet in the world is weighing in right now with their take on what this means for Apple, the tech industry itself, Steve Jobs and his legacy. In today's world of 2011, we tend to focus on only Steve Jobs, the CEO.

Resilient Manufacturing Last Friday, I had pleasant breakfast with Justin Mares (he graciously drove out of the city to meet me and see some of the historical sites nearby), the young COO of Cloudfab (the 3D fabrication start-up). We had an interesting conversation about the future of manufacturing and how his company could quickly position themselves as leaders in the space. Came up with what I thought was a killer business strategy. 7B people & you: What's your number? Sources: All population data are based on estimates by the UN Population Division and all calculations provided by the UN Population Fund. The remaining data are from other sections of the UN, the Global Footprint Network and the International Telecommunications Union.

Rio Olympics 2016: Artist JR honors a Sudanese athlete who's missing the Olympics, with a towering mural in Rio — Quartz “The goal of Olympism is to place sport at the service of the harmonious development of humankind, with a view to promoting a peaceful society concerned with the preservation of human dignity,” reads one of the fundamental principles of Olympism (pdf, p.13), also known as the philosophy of the Olympic games. Time and again, the Olympic games have served to reflect and even amplify this spirit. It has allowed people to represent their countries—even if they weren’t officially recognized by their neighbors or members of the United Nations.

Most Creative Foam of Art Photo Manipulation June 6th, 2011 Linda There are many kind of art we have seen in this world, This incredible art of Photo manipulation just surprise us with how it is indeed possible to change the time and space. How simple can we see what is not theoretically be just cannot. Though just a theory, it is possible, and only a creative artist can make this possible, artist can change the theory of life with his creativity and art.

Six Keys to Changing Almost Anything - Tony Schwartz by Tony Schwartz | 10:58 AM January 17, 2011 Change is hard. New Year’s resolutions almost always fail. But at The Energy Project, we have developed a way of making changes that has proved remarkably powerful and enduring, both in my own life and for the corporate clients to whom we teach it. Our method is grounded in the recognition that human being are creatures of habit. Fully 95 percent of our behaviors are habitual, or occur in response to a strong external stimulus.