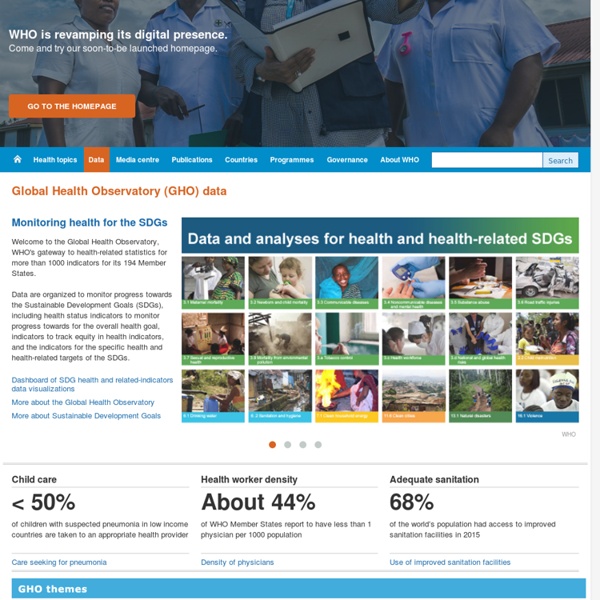 Prosperity Index National success is about more than just wealth. And yet, traditionally we have used narrow measures of wealth (such as GDP) as our benchmark to determine the success of nations. The Prosperity Index goes beyond GDP to measure countries’ success against a broad set of metrics covering areas such as health, education, opportunity, social capital, personal freedom, and more. The Prosperity Index is the only global index that measures national prosperity based on both wealth and wellbeing (objective and subjective data). The Index seeks to redeﬁne the concept of national prosperity to include, as a matter of fundamental importance, factors such as democratic governance, entrepreneurial opportunity, and social cohesion. It aims to spark debate and to encourage policy-makers, scholars, the media, and the interested public to take an holistic view of prosperity and to better understand how it is created.

OS OpenData Try our data If you want to try Open Data today as either a download or DVD, please use our online ordering portal. Order now The World Bank DataBank - Create Widgets or Advanced Reports and Share Loading...... Sign In This page is in UN Millennium Development Goals Disclaimer The United Nations is not responsible for the content of any messages posted on this site or sites linked from this page. The inclusion of a message does not imply the endorsement of the message by the United Nations. MDG Indicators CISDOC - bibliographic database (ILO Occupational health) The archived database covers international occupational safety and health (OSH) literature. It includes many language materials from various countries. CISDOC constitutes an ideal tool for obtaining references to archived documents, most of which being accessible through library services around the world. International database representing all aspects of safety and health at work; Emphasis on training and policy documents from various countries; Subject descriptors and annotations provided for all records. The database features simple and advanced search tools and its content can be browsed by topics and industries.

CATO Economic Freedom of the World Global economic freedom increased slightly in this year’s report, but remains below its peak level of 6.92 in 2007. The average score increased to 6.86 in 2013, the most recent year for which data is available. In this year’s index, Hong Kong retains the highest rating for economic freedom, 8.97 out of 10. The rest of this year’s top scores are Singapore, 8.52; New Zealand, 8.19; Switzerland, 8.16; United Arab Emirates, 8.15; Mauritius, 8.08; Jordan, 7.93; Ireland, 7.90; Canada, 7.89; and the United Kingdom and Chile at 7.87. The United States, once considered a bastion of economic freedom, now ranks 16th in the world with a score of 7.73. Due to a weakening rule of law, increasing regulation, and the ramifications of wars on terrorism and drugs, the United States has seen its economic freedom score plummet in recent years, compared to 2000 when it ranked second globally.

USGS Earth Explorer: Download Free Landsat Imagery The USGS Earth Explorer is a similar tool to the USGS Global Visualization Viewer (GloVis) in that users search catalogs of satellite and aerial imagery. The USGS Earth Explorer is the new and improved version. The USGS Earth Explorer gives some extra capabilities: Downloading data over chronological timelines.Wide range of specifying search criteria.A long list of satellite and aerial imagery to choose. Explore one of the largest databases of remote sensing data and create some of your own land cover classification. Shoshin For the Ryukyuan king, see Shō Shin. Shoshin (初心) is a concept in Zen Buddhism meaning "beginner's mind". It refers to having an attitude of openness, eagerness, and lack of preconceptions when studying a subject, even when studying at an advanced level, just as a beginner in that subject would. The term is especially used in the study of Zen Buddhism and Japanese martial arts.

Millennium Indicators The Millennium Development Goals Report 2013 was launched in Geneva by the Secretary-General on 1 July 2013. The report presents the yearly assessment of global and regional progress towards the MDGs. With the deadline for the MDGs on the horizon, this year's report examines where the targets have been met and where redoubled efforts are needed urgently to accelerate the progress. It also reveals that our attention needs to focus on disparities across geographical areas and population groups within countries. WHO Eastern Mediterranean health observatory Civil registration and vital statistics systems in the Region Between November 2012 and January 2013, countries of the Eastern Mediterranean Region conducted a civil registration and vital statistics system rapid assessment. The results show that around 40% of countries have either inadequate or weak systems, and only a quarter have a satisfactory system.

WB International Debt Statistics Focuses on financial flows, trends in external debt, and other major financial indicators for developing and advanced economies (data from Quarterly External Debt Statistics and Quarterly Public Sector Debt databases). Includes over 200 time series indicators from 1970 to 2014, for most reporting countries, and pipeline data for scheduled debt service payments on existing commitments to 2022. Access the database, tables and content of the new IDS Database Archives These archives contain Excel spreadsheets and range in size from 6-80Mb (compressed), and include databases from the period prior to 2012 when the report was named Global Development Finance. Archives from July, 2010 to October, 2012 also include data from the World Development Indicators.