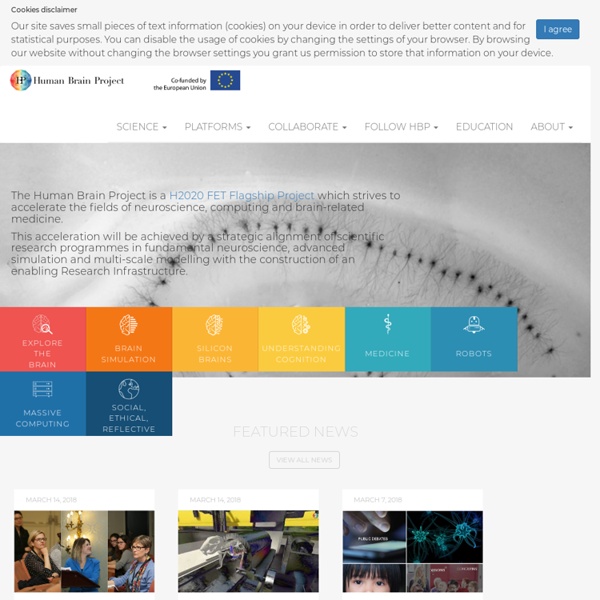 Jobs The Human Brain Project is always looking for talented scientists and engineers. If you're looking for a chance to contribute to this groundbreaking project and our understanding of what it means to be human, please review our jobs section to see open positions. Learn more Independent Reviewers In the context of the Competitive Call for additional beneficiaries, the Human Brain Project is inviting expressions of interest from potential reviewers (remote participation) and Evaluation Panel members.

Sequencing the Connectome Converting connectivity into a sequencing problem can be broken down conceptually into three components. (A) Label each neuron with a unique sequence of nucleotides — a DNA “barcode.” (B) Associate barcodes from synaptically connected neurons with one another, so that each neuron can be thought of as a “bag of barcodes” — copies of its own “host” barcode and copies of “invader” barcodes from synaptic partners. (C) Join host and invader barcodes into barcode pairs. These pairs can be subjected to high-throughput sequencing. Green Fluorescent Protein - Cool Uses - Brainbow Brainbow Never before has a brain been so beautiful. Jeff Lichtman and Joshua Sanes, researchers at the Harvard Brain Center, have created transgenic mice with fluorescent multicolored neurons. The photographs of the mouse brains that appear in the November 1, 2007 issue of Nature could be housed in the Museum of Modern Art or could be used to decorate Joseph's technicolored dream coat.

70,000+ Have Played ‘Eyewire’ Game That Trains Computers To Map the Brain Your connectome, the map of all 86 billion connected neurons in your brain, is hopelessly complex. In fact, one human connectome has a staggering 10,000 times that number of neural pathways. Every thought you have and every memory you hold exists in your connectome, and major efforts are under way to map it. The good news is that you don’t need a fancy neuroscience degree to help out. In fact, the fancy degreed neuroscientists are hoping that you might pitch in. Created by scientists at MIT, Eyewire is a browser game that lets players take on the challenge of mapping neural pathways in brains — no scientific background required.

BBC Future - simulate brain? A billion dollar project claims it will recreate the most complex organ in the human body in just 10 years. But detractors say it is impossible. Who is right? For years, Henry Markram has claimed that he can simulate the human brain in a computer within a decade. On 23 January 2013, the European Commission told him to prove it. His ambitious Human Brain Project (HBP) won one of two ceiling-shattering grants from the EC to the tune of a billion euros, ending a two-year contest against several other grandiose projects. Ohm's law V, I, and R, the parameters of Ohm's law. where I is the current through the conductor in units of amperes, V is the potential difference measured across the conductor in units of volts, and R is the resistance of the conductor in units of ohms. More specifically, Ohm's law states that the R in this relation is constant, independent of the current.[3] The law was named after the German physicist Georg Ohm, who, in a treatise published in 1827, described measurements of applied voltage and current through simple electrical circuits containing various lengths of wire.

First map of the human brain reveals a simple, grid-like structure between neurons In an astonishing new study, scientists at the National Institutes of Health (NIH), have imaged human and monkey brains and found… well, the image above says it all. It turns out that the pathways in your brain — the connections between neurons — are almost perfectly grid-like. It’s rather weird: If you’ve ever seen a computer ribbon cable — a flat, 2D ribbon of wires stuck together, such as an IDE hard drive cable — the brain is basically just a huge collection of these ribbons, traveling parallel or perpendicular to each other. There are almost zero diagonals, nor single neurons that stray from the neuronal highways. The human brain is just one big grid of neurons — a lot like the streets of Manhattan, minus Broadway, and then projected into three dimensions. This new imagery comes from a souped-up MRI scanner that uses diffusion spectrum imaging to detect the movement of water molecules within axons (the long connections made by neurons).

FACETS - EU (finished) Since 2006, the Electronic Vision(s) group is coordinator and member of the FACETS research project. Quoting the official FACETS website, "the goal of the FACETS (Fast Analog Computing with Emergent Transient States) project is to create a theoretical and experimental foundation for the realisation of novel computing paradigms which exploit the concepts experimentally observed in biological nervous systems. The continuous interaction and scientific exchange between biological experiments, computer modelling and hardware emulations within the project provides a unique research infrastructure that will in turn provide an improved insight into the computing principles of the brain. This insight may potentially contribute to an improved understanding of mental disorders in the human brain and help to develop remedies." Together with a team from the TU Dresden, the Electronic Vision(s) group is responsible for the design and building of a neuromorphic hardware.

Kirchhoff's circuit laws Both of Kirchhoff's laws can be understood as corollaries of the Maxwell equations in the low-frequency limit. They are accurate for DC circuits, and for AC circuits at frequencies where the wavelengths of electromagnetic radiation are very large compared to the circuits. Kirchhoff's current law (KCL)[edit] The current entering any junction is equal to the current leaving that junction. i2 + i3 = i1 + i4 This law is also called Kirchhoff's first law, Kirchhoff's point rule, or Kirchhoff's junction rule (or nodal rule). Simple mathematical pattern describes shape of neuron ‘jungle’ Neuron shape model: target points (red) distributed in a spherical volume and connected to optimize wiring in a tree (black) (credit: H. Cuntz et al./PNAS) University College London (UCL) neuroscientists have found that there is a simple pattern that describes the tree-like shape of all neurons.

RC circuit A resistor–capacitor circuit (RC circuit), or RC filter or RC network, is an electric circuit composed of resistors and capacitors driven by a voltage or current source. A first order RC circuit is composed of one resistor and one capacitor and is the simplest type of RC circuit. RC circuits can be used to filter a signal by blocking certain frequencies and passing others. The two most common RC filters are the high-pass filters and low-pass filters; band-pass filters and band-stop filters usually require RLC filters, though crude ones can be made with RC filters. Introduction[edit]