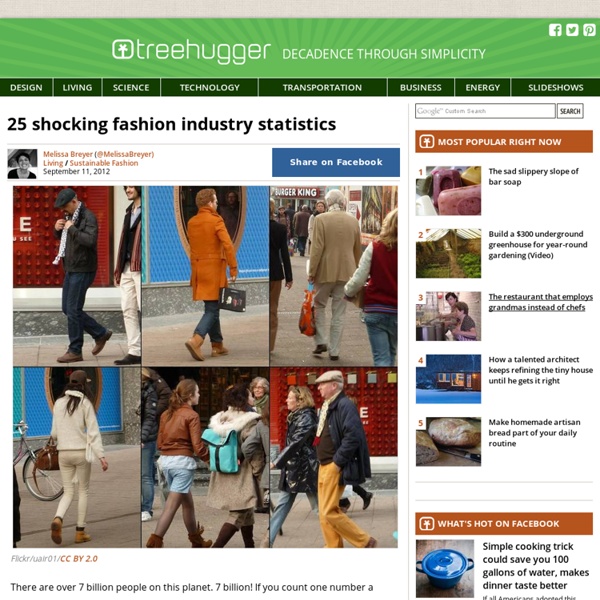 Fast Fashion Is Out, Slow Fashion Is In: Where to Buy Previously Owned Clothing Online - Sister Eden Image Credit: Gwydion M. Williams I’m a sucker for clothes shopping. I subscribe to Zulilly emails, I browse ModCloth on the regular, and I’m fairly sure I’ve put at least half of NY&Co’s executives’ kids through college. That’s not really a good thing – I know I need to get better about my consumerism, especially when it comes to fast fashion. Rusty Zipper Looking for vintage clothing? Nasty Gal Nasty Gal prides itself for it’s carefully curated collection of vintage clothing. thredUP Unlike Rusty Zipper or Nasty Gal who gather their collections in-house, thredUP acts like an online consignment store. LikeTwice LikeTwice is another online consignment store, but differs a bit from thredUP. So there you go – a couple of online used clothing stores to satisfy your inner fashionista without adding to the waste stream.

The Antidote to Fast Fashion Fast fashion: high profits, big advertisements, little value. Two weeks ago, I bought a leather handbag. When I spotted it sitting in a forlorn corner of an East London flea market, I told myself I would pay no more than £5 for it. When the uninterested hipster who was selling it said it cost just £2, I didn’t even try to barter down the price. Sure, the bag’s inner lining was ripped and dirty enough that I cut it out as soon as I got home. While I’ve always been a fan of second-hand goods and the thrill of finding a one-off bargain, purchases like this one have become even more of a treasure since I made the decision to swear off “fast fashion” earlier this year. With nearly instantaneous runway-to-retail turnover, ridiculously cheap prices, and a dizzying volume of colors, varieties and sizes, it’s no surprise that clothing from Forever 21 and H&M are the mainstays of many women’s wardrobes. It appears however, that few shoppers are joining me. What is the alternative though?

In with the old as vintage comes back into fashion Can you imagine being so dedicated to vintage clothing that you wear it to work, going out at night, even doing your weekly shop? Caroline Allen met three women who dress vintage because they love the look, the superior quality and as a gentle protest against fast fashion and fast living. LOOKS from the 1960s and early 1970s are stealing a march on the catwalks as minis, maxis, geometric prints, capes and knee boots turn back time. But some dedicated fashionistas are choosing to wear authentic vintage clothing day in day out, regardless of Irish weather and the often unforgiving nature of old fabrics. Is this nostalgic dressing due to the popularity of TV series such as Mad Men and Downton Abbey or because of a desire to stand out from the crowd? Or could it be a political statement about our throwaway culture and its unpalatable origins? Whatever it is, vintage is everywhere: on the television, in fashion and is even making its ways back into our homes through interior trends.

Join in the Pre-Loved and Vintage Fashion Furore! - Ethical Hedonist Join in the Pre-loved and Vintage Fashion Furore! Written by Katherine Pickles and edited by Alison Jane Reid A movement for change is emerging from the fashion world. Not only are stylish shopaholics becoming more eco-conscious, as well as price-tag conscious, many of us are tiring of repetitive, one-season-wonder garments and are yearning, instead, for exquisite couture fabrics with timeless elegance. This is where pre-loved, vintage clothes are rising above the rest by allowing you to be a time traveller to reflect different eras and admire the preciousness of the fine fabrics made from quality craftmanship. Part of the success of this phenomenon is owed to the rebranding of dull, dated terms such as second hand, pre-worn and hand-me-down into fabulous ‘pre-loved’ and ‘vintage couture’, encouraging clothes lovers to join in the sustainable fashion furore. Sultry Emma Watson in a vintage lace LBD VestiareCollective.com Silk, Valentino gown available on VestiaireCollective.com Tags-on.com

Traditional fashion calendar fuels overconsumption and waste | Guardian Sustainable Business Yesterday was the final day of London Fashion Week, a celebration of spring/summer 2015 collections, following a tradition started by Parisian couture houses in the early 21st century of showing collections six to eight months prior to shipment. Today, spring/summer collections are debuted on the catwalk in September and October and delivered to stores between January and March while the autumn/winter collections are debuted in February and March and delivered between July and September. In between, seasons known as resort and pre-fall are designed to come to shops in midwinter and midsummer respectively. Kate McGregor, owner of the sustainable retailer Kaight, says most of her customers won’t begin shopping for sweaters and coats until October or even November once the weather really cools, and will continue to do so well into February, when the fashion calendar dictates that consumers should be shopping spring. Weather always will determine what people wear. Read more like this:

Essential items top consumer shopping lists but economic worries top woes Published on August 25th, 2010 While Britain may be officially out of recession, latest research from British Lifestyles, Mintel’s flagship report, reveals two thirds of consumers are still worried about the state of the economy and that five out of the top six worries are economic, highlighting the impact the recent financial climate has made. Moreover, Mintel finds that given the new Government’s determination to reduce the finance deficit, two new economy-related worries have become prominent in 2010: cutbacks in public spending and the state of the NHS. Immigration and the Iraq war have also risen into public consciousness, with the former now ranking as the nation’s number three concern. Richard Perks, Research Director at Mintel said: ” consumers continue to be influenced by uncertainty about their own and the economy’s short-term future and the level of concern about unemployment has hardly changed in the past year and personal finance. Technology booms In home food success

Facts and Figures in the UK fashion industry - statistics about the fashion business in England - size of economic activities Archive: Fashion industry statistics United Kingdom 14 February 2014 At a press conference to open London Fashion Week Natalie Massenet, Chairman of the British Fashion Council, announced updated figures showing substantial growth in the UK fashion industry over the past five years. - The direct value of the UK fashion industry to the UK economy is £26 billion; up from £21 billion in 2009. Showing an increase of 22% in nominal terms (source: Oxford Economics 2014) - The UK fashion industry is estimated to support 797,000 jobs (source: Oxford Economics 2014). This is a decrease of 2.3% from 2009 - Whilst employment figures have dropped overall the increased contribution to UK GVA reflects higher productivity within the fashion sector. The Mayor of London Boris Johnson said: ‘These latest figures are clear evidence of the hugely important contribution that fashion makes to our economy. In 2009 there were 293,510 retail outlets in the UK.

5 Truths the Fast Fashion Industry Doesn't Want You to Know | Shannon Whitehead The fashion industry gets a lot of flack these days. The excess, the overtly sexual advertising, the humanitarian issues, the waste, the lawsuits, the list goes on. The industry giants have dedicated millions of dollars to massive PR campaigns, going so far as to launch “conscious collections“ and donate proceeds to worthy causes. 1.) Once upon a time, there were two fashion seasons: Spring/Summer and Fall/Winter. According to Elizabeth Cline in her book Overdressed: The Shockingly High Cost of Cheap Fashion, fast-fashion merchandise is typically priced much lower than the competition, operating on a business model of low quality / high volume. Cline points to the Spanish retailer Zara for pioneering the fast-fashion concept with new deliveries to its stores coming in twice per week. With designers creating new looks on a weekly basis, the fashion calendar for these companies is set up to deliberately make the customer feel off-trend after the first wear. 2.) 3.) 4.) 5.) Lady Gaga

Fast Fashion Systems: Theories and Applications Dr. Tsan-Ming Choi (Jason) is currently an Associate Professor in Fashion Business at The Hong Kong Polytechnic University. Over the past few years, he has actively participated in a variety of research projects on supply chain management and applied optimization.