Why Ireland split into the Republic of Ireland & Northern ... Northern Ireland's Street Art. Transcript Belfast is a lively and exciting city known for its music, nightlife and university. 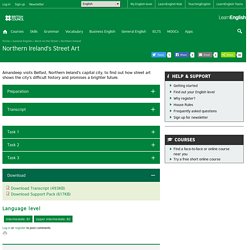 But it was once famous for something which made headlines around the world. Years of conflict known as the Troubles left thousands dead. One community, who are mostly Protestant Christians, wanted Northern Ireland to remain part of the United Kingdom. The other community, who are mostly Catholic Christians, wanted it to join up with the Irish Republic.

Fortunately, those days are over. The art showed support for one side or the other and symbolised a divided community. Amandeep: Hi there, Tim. He has studied the murals and what they can tell us about the history of conflict here. Amandeep: Tim, can you tell me about images like this? Will NI's peace walls come down by 2023 to meet 10-year target? The Story Behind the famous murals of Belfast. Peace in Northern Ireland, But Religious Divide Remains. In Focus Northern Ireland: In the Shadow of the Walls. Belfast, Northern Ireland Murals and Billy Connolly. Art of Conflict Northern Ireland's street murals (2013) British Council. Transcript Nick: This is London, and behind me are the Houses of Parliament. 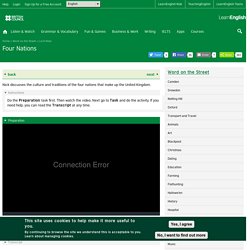 Parts of these buildings are more than nine hundred years old. This is where the laws of the UK are debated and created. The United Kingdom is actually made up of four different countries; England, Scotland, Wales and Northern Ireland. Each nation has its own culture and heritage. The population of England is around fifty million people. But what are we really like? Priest: The English are a tolerant people.

Woman 1 : They’re just enchanting. Dsep11vi. The History of St. Patrick's Day. History - The Troubles - Violence. The legacy of the Bloody Sunday killings. In the immediate aftermath of Bloody Sunday, the British embassy in Dublin was petrol-bombed by infuriated protesters and the Mid Ulster MP Bernadette McAliskey punched the home secretary, Reginald Maudling, accusing him of lying to the Commons over what happened. 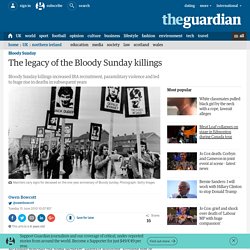 The legacy of the killings, however, was the boost to IRA recruitment and the outrage that fuelled paramilitary violence through subsequent decades. Lord Widgery's inquiry and official exoneration of the soldiers – dismissed by nationalists as a state "cover up" – aggravated the sense of injustice. During the three previous years, the Troubles had claimed around 200 lives. In 1972, the year in which Bloody Sunday occurred, a total of 479 people died; it was Northern Ireland's worst year of carnage. The annual death rate did not fall below 200 again until 1977. "They had a very small base, small amounts of hardware and, most importantly, very little support.

In his memoirs, Mister, Are You a Priest? Peace wall demolished in Belfast after dividing communities for 30 years - Irish Post. How a failed rebellion changed the world: The Easter Rising’s strange centennial. Everything about the Easter Rising of 1916 is controversial, including when to celebrate its centennial. 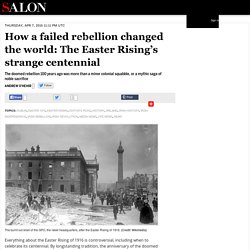 Inside Divided Belfast. IRA ceasefire 20 years on: The priest who brokered the peace. It is an iconic image, encapsulating the horror of the Troubles. 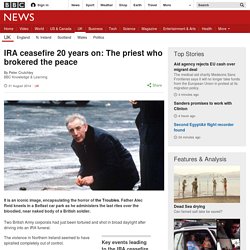 Father Alec Reid kneels in a Belfast car park as he administers the last rites over the bloodied, near naked body of a British soldier. Two British Army corporals had just been tortured and shot in broad daylight after driving into an IRA funeral. The violence in Northern Ireland seemed to have spiralled completely out of control. Yet the contents of a blood soaked envelope Fr Reid was carrying that day would set in motion a chain of events that led to an IRA ceasefire, and ultimately a lasting peace. 1969 Northern Ireland Riots and and the Catholic-Protestant Conflict. Easter Rising: Centenary parade takes place in Dublin. Hundreds of thousands of people have lined the streets of Dublin where a parade has marked the 100th anniversary of the 1916 Easter Rising. 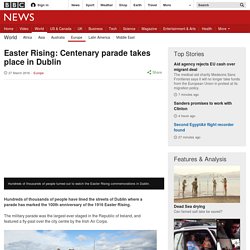 The military parade was the largest ever staged in the Republic of Ireland, and featured a fly-past over the city centre by the Irish Air Corps. Image copyright Getty Images. Video: Peace wall is demolished in north Belfast. 17 reasons you should visit Belfast immediately. Belfast may not be the most obvious choice for a city break, but it’s fast becoming one of the UK’s coolest cities. 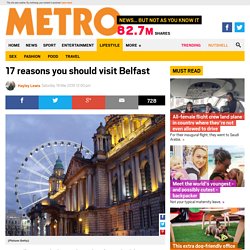 A colourful mix of art, music, history, great food and beautiful landscapes make it a must visit destination. And if you still need convincing, here are 17 reasons why you should visit Belfast: 1. The Cathedral Quarter Belfast has recently been divided into ‘quarters’, each with it’s own character and charm. 2. Belfast has been through some prosperous and challenging times in the last century, and its residents are proud of their history. 3. Probably Belfast’s best-known tourist attraction is its black taxi tours. 4. 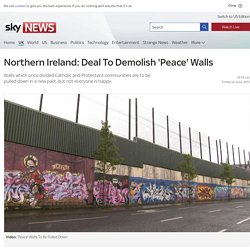 The economic deal comes just three days before the country hosts the G8 summit of world leaders. The deal was announced at a joint press conference by Prime Minister David Cameron, Northern Ireland's First Minister Peter Robinson and Deputy First Minister Martin McGuinness. Speaking at the press conference, Mr Robinson said: "We both recognise that there are two key issues that are required in Northern Ireland to continue and to move forward. "The first is obviously to grow our economy ... Erected temporarily to keep communities apart, the barriers have become a permanent blot on the landscape but those living in their shadow fear it is too soon to pull them down.