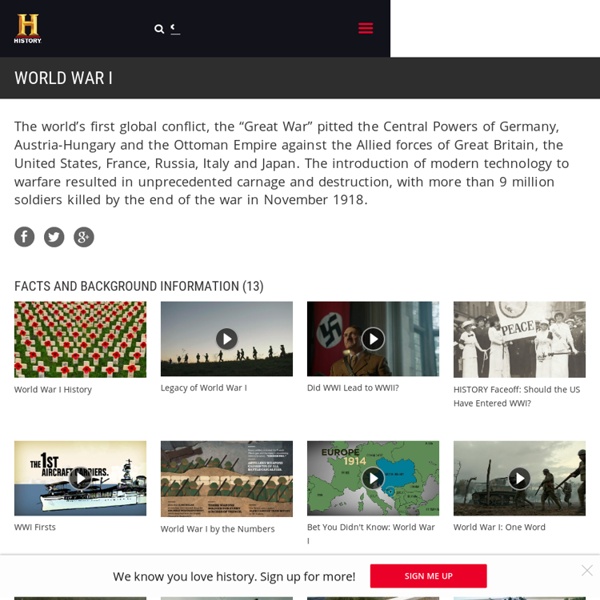 Treaty of Versailles, 1919 IMPACT OF WORLD WAR I World War I was one of the most destructive wars in modern history. Nearly ten million soldiers died as a result of hostilities. The enormous losses on all sides of the conflict resulted in part from the introduction of new weapons, like the machine gun and gas warfare, as well as the failure of military leaders to adjust their tactics to the increasingly mechanized nature of warfare. A policy of attrition, particularly on the Western Front, cost the lives of hundreds of thousands of soldiers. No official agencies kept careful accounting of civilian losses during the war years, but scholars suggest that as many as thirteen million non-combatants died as a direct or indirect result of the war. TREATIES OF SAINT-GERMAIN-EN-LAYE, TRIANON, AND SEVRES After such a devastating war, the victorious Western Powers imposed a series of harsh treaties upon the defeated nations. Moreover, Germany was forbidden to maintain an air force. Further Reading Henig, Ruth B.

World History Lesson Plans, Games, Powerpoints, Classroom Activities K-12 The Path to Nazi Genocide — Media NARRATOR: Paris, 1900. More than fifty million people from around the world visited the Universal Exposition—a world’s fair intended to promote greater understanding and tolerance among nations, and to celebrate the new century, new inventions, exciting progress. The 20th century began much like our own—with hope that education, science and technology could create a better, more peaceful world. What followed soon after were two devastating wars. TEXT ON SCREEN: The Path to Nazi Genocide NARRATOR: The first “world war,” from 1914 to 1918, was fought throughout Europe and beyond. TEXT ON SCREEN: Aftermath of World War I and the Rise of Nazism, 1918-1933 NARRATOR: The humiliation of Germany’s defeat and the peace settlement that followed in 1919 would play an important role in the rise of Nazism and the coming of a second “world war” just 20 years later. Many veterans and other citizens struggled to understand Germany’s defeat and the uncertain future.

The First World War in France (British Library) The French public yearned for revenge after the defeat of 1870, and for the return of the parts of Alsace and Lorraine lost to Germany. There were international rivalries over colonies, naval power and empires in Europe. France had allied itself to Russia, and after the mobilisation of Russia on 30 July 1914, France also mobilised, on 1 August. Explore 500 historical sources from across Europe, with new insights by experts on our World War One website Crowds enthusiastically called for war in Berlin and Paris, and Germany invaded Belgium on 3 August. In spite of heroic Belgian resistance, and the aid of British and French troops, Belgium was overrun. Maurice Barrès, La Lorraine dévastée. Verdun 1916 was the bloodiest battle, and French troops also fought in Gallipoli, in Turkey and Salonica, Northern Greece. La Bourguignotte. In 1922 the British Museum published the Subject index of the books relating to the European War, 1914-1918, acquired by the British Museum, 1914-1920.

Archaeologists in Poland Make Horrendous Discovery Underneath the Ground That the Nazis Never Wanted Found Archaeologists in eastern Poland claim they have discovered new evidence related to the Nazi regime’s evil and murderous history. Hidden underneath the ground at a former Nazi concentration camp on the outskirts of the village of Sobibor, archaeologists reputedly found gas chambers that were intentionally hidden by Nazis after an uprising in 1943. Officials estimate roughly 250,000 Jews were killed in the gas chambers. Following an uprising at the camp on Oct. 14, 1943, German forces reportedly demolished the gas chambers. The site of the mass killing of Jews was later covered with an asphalt road. Credit: Yad Vashem International Institute for Holocaust Research Yoram Haimi, one of the archaeologists on the project, told Reuters that they “were amazed at the size of the building and the well-preserved condition of the chamber walls.” Haimi also has a personal connection to the grisly discovery. Very few prisoners ever made it out of Sobibor alive.

Why We Need to Continue Studying the Holocaust Just because an episode in history took place long ago does not mean that we stop asking questions about it, about whose stories are told as we remember, and about what our assumptions about history mean for our lives today. We must continue to ask questions about the past, even when doing so—especially when doing so—challenges our understanding of how something unfolded. In my own work as a historian and author of several books on Russian history, I like to ask questions that complicate the narratives commonly told. Here, on the Eastern Front, Nazis murdered nearly a million Jews in the months following the German invasion of the Soviet Union in June 1941. What follows is a look at one story from that time. By the summer of 1944, Red Army troops had driven the Germans out of Russia, Ukraine, Belorussia, and the Baltic region. On July 23, 1944, Red Army soldiers entered the city of Lublin in eastern Poland. The Nazis murdered Jews across the European continent.