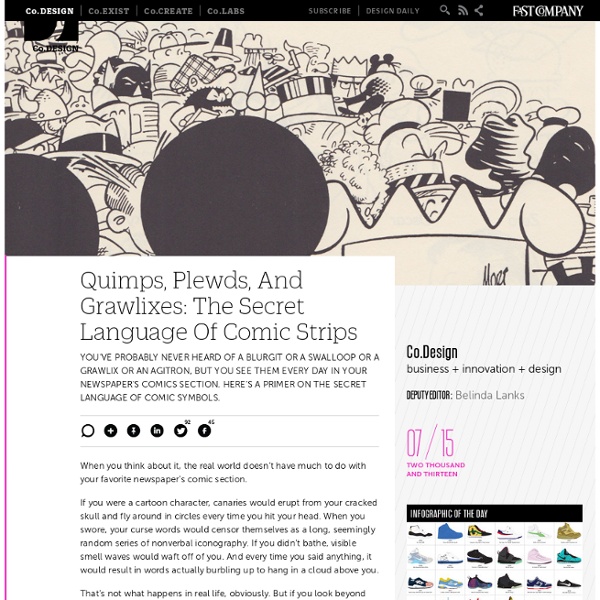 When you think about it, the real world doesn’t have much to do with your favorite newspaper’s comic section. If you were a cartoon character, canaries would erupt from your cracked skull and fly around in circles every time you hit your head. When you swore, your curse words would censor themselves as a long, seemingly random series of nonverbal iconography. If you didn’t bathe, visible smell waves would waft off of you. And every time you said anything, it would result in words actually burbling up to hang in a cloud above you. That’s not what happens in real life, obviously. In 1980, Mort Walker--the creator of comic strips like Beetle Bailey and Hi and Lois--published a charming book titled The Lexicon of Comicana. Born in 1923 in Kansas City, Missouri, Mort Walker has been an insanely prolific cartoonist for almost 75 years. If you asked Walker, he’d probably say there was nothing special about him being so precocious at such a young age. For example, there’s the emanata.

5 Rules For Crowdfunding Success From The Queen Of Multitasking Underwear (You Read That Right) Technology probably isn't the first thing most people think of when they think of underwear. Joanna Griffiths is not most people. While studying at INSEAD, one of the world's largest graduate business schools, Griffiths saw an opportunity to create a product that did more than the existing options on the market. "Thanks to technology, almost everything has evolved, everything but our underwear," she says. "We created a product truly designed with women's needs in mind: underwear that looks great, fits great, and has technology built in to eradicate odor and wick away and absorb moisture." Griffiths needed a way to fund her new venture, Knix Wear. The campaign was a success, surpassing the $40,000 goal (by an extra $20,000). 1. Before you start your crowdfunding campaign, Griffiths suggests that it's important to study others who have done it well. 2. No matter how much experience you have in the crowdfunding space, it requires a strategic approach to reach--and exceed--your goal. 3. 4.

May 20, 1990: Advice on Life from Calvin and Hobbes Creator Bill Watterson by Maria Popova “The truth is, most of us discover where we are headed when we arrive.” ‘Tis the season for glorious life advice dispensed by cap-and-gown-clad elders to cap-and-gown-clad youngsters, emanating a halo effect of timeless wisdom the rest of us can absorb any day, at any stage of life. On May 20, 1990, Bill Watterson, creator of the beloved Calvin and Hobbes comic strip, took the podium at Kenyon College — the same stage David Foster Wallace would occupy 15 years later to deliver one of history’s most memorable commencement addresses — and gave the graduating class a gift of equally remarkable insight and impact. Watterson begins the speech by articulating the same sentiment at the heart of the most unforgettable commencement addresses: the notion that not-knowing is not only a part of the journey, but an integral part: I have a recurring dream about Kenyon. It’s surprising how hard we’ll work when the work is done just for ourselves. He concludes by echoing Rilke:

Is Dr. Bronner's All-Natural Soap A $50 Million Company Or An Activist Platform? Yes Get David Bronner talking about soap--real soap--and he can go on for quite a while. He can talk about soap-making’s long history (“it’s one of the oldest things to do, besides baking bread”), the ancient soapy trade routes through the Middle East and Mediterranean, or a triglyceride's chemical structure. He can wax eloquent about the difference between soaps made with natural products--like Dr. Bronner’s Magic Soaps, the ones he sells worldwide--and artificial detergent-based soaps. Bronner, 39, who runs his Escondido, California-based company with his brother, wants to make and sell good soap, sure. Last year, for instance, Bronner camped out in a cage in front of the White House, where he proceeded to publicly harvest hemp, a product he uses in his soaps and which he feels is unduly controlled. “He was just 24-7 on it,” says David of his grandfather’s mission, which was so all-consuming as to lead Dr. David finally decided to join the company a few years after that.

The Ultimate Beer Infographic Just Got Even More Ultimate What happens when you’re a Brooklyn-based illustration studio that releases an absurdly, ridiculously, profusely detailed chart of beer? Unable to top this perfect intersection of high-minded design and sudsy, sudsy illustration, do you just pop a cold one and close up shop? Or do you put a fresh coat of wax on that handlebar mustache, grab another cronut, and get back to work? Pop Chart Lab did the latter, doubling down on their design that’s been in the works since 2010 to create this 60-by-40-inch malty monstrosity called The Magnificent Multitude of Beer. Yet at the same time, this ever-ballooning print is like an unintentional visualization of the last three years of the U.S. beer industry--we now have as many craft breweries as we had in the 1880s, with two more opening every day. As the company’s co-founder Patrick Mulligan puts it, “I think we can be happy at 60-by-40 for a while, but soon enough I'm sure we'll be looking for a printer that can print 100 inches wide.”

Online Printing Services | Digital Printing Companies | PrintRunner.com True To Its Roots: Why Kickstarter Won't Sell Bing bing bing. "Attention! Excuse me! Attention!" It's well past midnight in Park City, Utah, at the Sundance Film Festival, when Karim Amer hoists himself onto the bar, stands up straight, puffs his chest, and starts tapping his glass. The 200 or so producers, agents, studio executives, and assorted Hollywood types who are drinking whiskey at High West--which bills itself as "the world's only ski-in distillery and gastro-saloon"--turn to half-listen. "We just had our premiere," Amer begins in a booming voice. Kickstarter, the New York crowdfunding website, is hosting this party. "I just wanted to make sure you saw that," the company's cofounder Yancey Strickler tells me after Amer steps down from the bar. Kickstarter has only been around since 2009, but the concept behind the site is centuries old, dating at least to the days of the House of Medici. But this excitement hasn't all sat well with Kickstarter, which lately has been getting attention for banning dozens of project categories.

A Fanzine Editor’s 60-Year Love Affair with 1950s Comics There’s this comic-book story about space aliens who try to save our planet from self-annihilation. But they arrive too late: We’d already destroyed ourselves in an atomic war. They land their rocket ship on a chunk of a devastated earth and discover a science-fiction comic book amid the rubble. It contains a story about aliens who look exactly like them, who try to save the earth but arrive too late, and who discover a comic book. And on the last page they see a picture of themselves looking at a picture of themselves, looking, etc., ad infinitum. Al Williamson: art Squa Tront is also the name of a fanzine that pays homage to 1950s-era EC Comics, a publisher that emerged in the 1940s. Wally Wood: art The following is the first of my two-part coverage of Benson, who’s been writing about comics since 1956. You’ll find part two, a look at John’s other work, including “The Sincerest Form of Parody,” a new collection of the best Mad-inspired satirical comics of the 1950s, here.

Li’l Abner’s Al Capp: A Monstrous Creature, a Masterful Cartoonist No doubt about it: Al Capp engaged in depraved behavior. Most disgraceful was his attempted rape of a number of women, from college co-eds to Grace Kelly. And, as the interview below suggests, there may be more. Abner rapidly gained unprecedented popularity and ran for 40-plus years. And now, both his dark and light sides are chronicled in Al Capp: A Life to the Contrary, a valuable, thorough, and sensitive 300-page biography of this contradictory and deeply troubled individual, written by Michael Schumacher and Denis Kitchen. Steven Heller describes the book as “spicy,” a word that also applies to the strips themselves, always bursting with provocatively erotic females. Capp’s mockery could target corporate injustices against comic book creators, as with DC Comics’ exploitation of Superman‘s Jerry Siegel and Joe Shuster. Denis Kitchen, the book’s co-author, good-humoredly refers to himself as “a very confused man who can’t seem to pick a career and stick with it.” Hah! Exactly.

Ambassadors of Goodwill: Vintage Matchbook Advertising and Design I picked up this salesman’s catalog for the Mercury Match Corporation of Zanesville, Ohio, about 25 years ago at the big antique show in Brimfield, Massachusetts. I remember the purchase vividly—I was over the moon, but tried to act all cool as I attempted to barter the price down from $35 to the far more reasonable $25 I had in mind. But I knew that I’d have paid $50 or more if I had to; anything to get my hands on Advertise with Mercury Union Label Book Matches. I was recently online and saw the same book selling for $250, and hoped that even one of the other investments I’d made over the years had fared anywhere near as well. “Every time you pass out a Book of Matches,” the Book Matches Work page reads, “you are sending out an ambassador of goodwill directed to the very people you want to reach.” Related Articles: No Related Posts Found

For a Glimpse Of The Future, Try Reading A 3.5-Inch Floppy Disk Tom Persky’s company, floppydisk.com, sells about 250,000 of the 3.5-inch and 5.25-inch square plastic storage cards each year. It has an inventory of about 1 million disks, many of which Persky acquired from competing companies as they went out of business. And he has no plans to restock them as they’re sold. “We stayed in the business through the good times of the floppy disk business, when it was a very common way to store media, through the trough of what we have now of people not using it very much at all,” Persky says. That's not to say floppy disks aren't still his mainstay. Any remaining modern demand for the once-ubiquitous floppy is driven by machines still made with old data inputs. The first floppy disks, introduced by IBM in 1971, were 8-inches big. The problem with digital storage--as the hundreds of people who ship Persky their floppy disks each year are finding out--is that it requires active upkeep. Persky’s data recovery methods are low-tech.