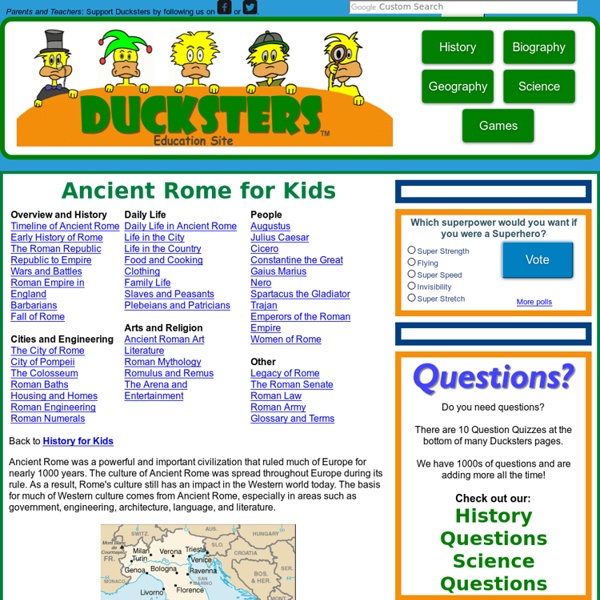 Back to History for Kids Ancient Rome was a powerful and important civilization that ruled much of Europe for nearly 1000 years. The culture of Ancient Rome was spread throughout Europe during its rule. As a result, Rome's culture still has an impact in the Western world today. The basis for much of Western culture comes from Ancient Rome, especially in areas such as government, engineering, architecture, language, and literature. The city of Rome is the capital of Italy today Map of Italy from the CIA World Factbook The Roman Republic Rome first grew into power as a Republic. The Republic would rule Rome for hundreds of years from around 509 BC to 45 BC. The Roman Empire In 45 BC Julius Caesar took over the Roman Republic and made himself the supreme dictator. The Roman Forum was the center of government Photo by Adrian Pingstone The Empire Splits As the Roman Empire grew it became more and more difficult to manage from the city of Rome. Fall of Rome Fun Facts about Ancient Rome Works Cited

British Museum: Ancient Rome In legend Rome was founded in 753 BC by Romulus, its first king. In 509 BC Rome became a republic ruled by the Senate (wealthy landowners and elders) and the Roman people. During the 450 years of the republic Rome conquered the rest of Italy and then expanded into France, Spain, Turkey, North Africa and Greece. Rome became very Greek influenced or “Hellenised”, filled with Greek architecture, literature, statues, wall-paintings, mosaics, pottery and glass. But with Greek culture came Greek gold, and generals and senators fought over this new wealth. Rome Reborn Mission Rome Reborn is an international initiative whose goal is the creation of 3D digital models illustrating the urban development of ancient Rome from the first settlement in the late Bronze Age (ca. 1000 B.C.) to the depopulation of the city in the early Middle Ages (ca. A.D. 550). With the advice of an international Scientific Advisory Committee, the leaders of the project decided that A.D. 320 was the best moment in time to begin the work of modeling. At that time, Rome had reached the peak of its population, and major Christian churches were just beginning to be built. After this date, few new civic buildings were built.

Ancient Rome for Kids - History Games and Videos Ancient Rome for Kids Ancient Rome was a civilization that developed from a tiny settlement to one of the largest empires in the ancient world between the 10th and 1st century BC. The Roman Empire extended its political control over all of Italy, and at its peak, stretched from England to North Africa and from the Atlantic Ocean to Arabia. The Romans contributed greatly to the development of law, war, art, literature, architecture, technology and language in the Western world, and their history continues to have a major influence on the world today. The History of Concrete - InterNACHI by Nick Gromicko and Kenton Shepard The time period during which concrete was first invented depends on how one interprets the term “concrete.” Ancient materials were crude cements made by crushing and burning gypsum or limestone. Lime also refers to crushed, burned limestone. When sand and water were added to these cements, they became mortar, which was a plaster-like material used to adhere stones to each other.

Secrets of Lost Empires Welcome to the companion Web site to the NOVA program "Roman Bath," scheduled for rebroadcast on January 31, 2006. In the film, which is a part of the NOVA series Secrets of Lost Empires, an international crew of archeologists, engineers, and historians designs, builds, and tests a functioning Roman bath in the Turkish countryside. Here's what you'll find online: A Day at the Baths Wander through the frigidarium, tepidarium, caldarium, and other vital rooms in our online reconstruction of the famous Baths of Caracalla. Construct an Aqueduct (Hot Science) The Emperor has appointed you Chief Water Engineer on an aqueduct-building project. To successfully ferry water from the hills, you'll need to learn when to use a tunnel or a covered trench, a wall, or an arcade.

History.com: Ancient Rome Augustus’ rule restored morale in Rome after a century of discord and corruption and ushered in the famous pax Romana–two full centuries of peace and prosperity. He instituted various social reforms, won numerous military victories and allowed Roman literature, art, architecture and religion to flourish. Augustus ruled for 56 years, supported by his great army and by a growing cult of devotion to the emperor. When he died, the Senate elevated Augustus to the status of a god, beginning a long-running tradition of deification for popular emperors.

Ancient Rome The Ancient Romans The Italian Peninsula was home to a people that would eventually rule most of the known world. The story of how this small village, which was named Rome, grew into the most powerful empire in the world is one of war, luck, and intrigue. According to legend, the city-state of Rome was founded by a young man named Romulus. Legend says that Romulus built a wall around his village. 10 facts about the Ancient Romans Ready for a journey back in time? Here at Nat Geo Kids, we’re about to get the lowdown on this amazing civilisation with our fab facts about the Romans! 1) Rome was founded in 753BC by its first king, Romulus. It grew into a rich and powerful city during the next few hundred years.

Building Roman Roads - The Roman Surveyors The Roman Surveyors If you took a poll about Roman engineering and asked people what defined Roman engineering, the famous Roman roads would lie towards the top of the list. These, more than anything, were the backbone of the Roman Empire and allowed the Romans to hold sway over a great area. This article is a part of the guide: Discover 44 more articles on this topic

PBS: The Roman Empire As with many cultures, a person’s quality of life depended in many ways on their rank within the social structure. Two Romans living at the same time in the same city could have very different lives. Rich… For wealthy Romans, life was good.