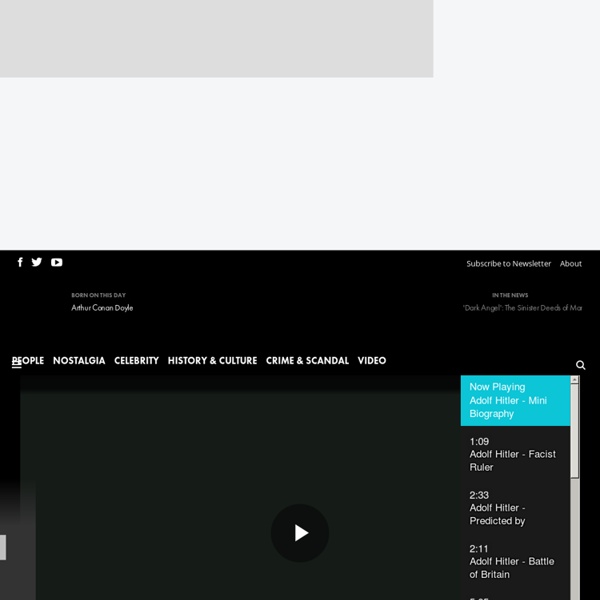 Synopsis Born in Austria in 1889, Adolf Hitler rose to power in German politics as leader of the National Socialist German Workers Party, also known as the Nazi Party. Hitler was chancellor of Germany from 1933 to 1945, serving as dictator for the bulk of his time in power. Background and Early Years Dictator Adolf Hitler was born in Braunau am Inn, Austria, on April 20, 1889, and was the fourth of six children born to Alois Hitler and Klara Polzl. Alois died suddenly in 1903. In 1913, Hitler relocated to Munich. Hitler became embittered over the collapse of the war effort. Party Leadership and Imprisonment After World War I, Hitler returned to Munich and continued to work for the military as an intelligence officer. To increase its appeal, the DAP changed its name to the Nationalsozialistische Deutsche Arbeiterpartei (NSDAP), often abbreviated to Nazi. Hitler's fervid beer-hall speeches began attracting regular audiences. Hitler was arrested and tried for high treason. Rise to Power Related:  Nazi Germany

Nazi Hunting News Courtesy of the United States Holocaust Memorial Museum In the years immediately after World War II, the four Allied powers that occupied Germany -- the United States, Great Britain, France, and the Soviet Union -- resolved to prosecute those individuals responsible for crimes committed against civilian populations under Adolf Hitler's Nazi regime. Trials were held in domestic and international courts, the most notable of which were the 1945-46 hearings at the International Military Tribunal (IMT) in Nuremberg, Germany. Although many civilian and military leaders were apprehended and brought to justice in the years after the war, many more suspected of Nazi-era war crimes remained at large.

Adolf Hitler Adolf Hitler (1889-1945) was the founder and leader of the Nazi Party and the most influential voice in the organization, implementation and execution of the Holocaust, the systematic extermination and ethnic cleansing of six million European Jews and millions of other non-aryans. Hitler was the Head of State, Supreme Commander of the Armed Forces and guiding spirit, or fuhrer, of Germany's Third Reich from 1933 to 1945. - Hitler's Early Years - World War I - Hitler Starts to Lead - Rise of the Nazi Party - Hitler As German Fuhrer - World War II - Allied Victory & Hitler's Death Early Years Born in Braunau am Inn, Austria, on April 20, 1889, Hitler was the son of a fifty-two-year-old Austrian customs official, Alois Schickelgruber Hitler, and his third wife, a young peasant girl, Klara Poelzl, both from the backwoods of lower Austria. World War I Hitler Becomes a Leader Rise of the Nazi Party Hitler As Fuhrer World War II Allied Victory and Hitler's Death

Concentration Camps, 1933–1939 Concentration camps (Konzentrationslager; abbreviated as KL or KZ) were an integral feature of the regime in Nazi Germany between 1933 and 1945. The term concentration camp refers to a camp in which people are detained or confined, usually under harsh conditions and without regard to legal norms of arrest and imprisonment that are acceptable in a constitutional democracy. THE FIRST CONCENTRATION CAMPS IN GERMANY The first concentration camps in Germany were established soon after Hitler's appointment as chancellor in January 1933. In the weeks after the Nazis came to power, The SA (Sturmabteilungen; commonly known as Storm Troopers), the SS (Schutzstaffel; Protection Squadrons—the elite guard of the Nazi party), the police, and local civilian authorities organized numerous detention camps to incarcerate real and perceived political opponents of Nazi policy. Special “political units on alert” (Politische Bereitschaften) originally guarded the SS concentration camps.

History - World Wars: Nazi Propaganda Aggression as a Basic Nazi Idea: Mein Kampf [Page 644] Hitler's Mein Kampf, which became the Nazi statement of faith, gave to the conspirators adequate foreknowledge of the unlawful aims of the Nazi leadership. It was not only Hitler's political testament; by adoption it became theirs. Mein Kampf may be described as the blueprint of the Nazi aggression. A great German philosopher once said that ideas have hands and feet. A copy of Mein Kampf was officially presented by the Nazis to all newly married couples in Germany. "To the newly married couple, Friedrich Rosebrock and Else Geborene Zum Beck, with best wishes for a happy and blessed marriage. This copy of Mein Kampf, which was the 1945 edition, contains the information that the number of copies- published to date amount to 6,250,000.] As a result of the efforts of the conspirators, this book, blasphemously called "The Bible of the German people," poisoned a generation and distorted the outlook of a whole people. [Page 646] entry into the League of Nations.

Escape of the Jewish People from Europe Even before the beginning of World War II, many Jews sought to escape from countries under Nazi control. Between 1933 and 1939, more than 90,000 German and Austrian Jews fled to neighboring countries (France, Belgium, the Netherlands, Denmark, Czechoslovakia, and Switzerland). After the war began on September 1, 1939, escape became much more difficult. Nazi Germany technically permitted emigration from the Reich until November 1941. However, there were few countries willing to accept Jewish refugees and wartime conditions hindered those trying to escape. Most non-Jews neither aided nor hindered the "Final Solution" and relatively few people helped Jews escape. ESCAPE TO SOVIET-OCCUPIED POLAND AND THE INTERIOR OF THE SOVIET UNION Between 1939 and 1941 nearly 300,000 Polish Jews, almost 10 percent of the Polish Jewish population, fled German-occupied areas of Poland and crossed into the Soviet zone.

Anne Frank Born on June 12, 1929, Anne Frank was a German-Jewish teenager who was forced to go into hiding during the Holocaust. She and her family, along with four others, spent over two years during World War II hiding in an annex of rooms above her father’s office in Amsterdam. Since it was first published in 1947, Anne Frank’s diary has become one of the most powerful memoirs of the Holocaust. After being betrayed to the Nazis, Anne, her family, and the others living with them were arrested and deported to Nazi concentration camps. Her bravery and legacy live on, however, and she is frequently cited as a model for today.

Adolf Hitler Adolf Hitler was born on 20th April, 1889, in the small Austrian town of Braunau near the German border. Both Hitler's parents had come from poor peasant families. His father Alois Hitler, the illegitimate son of a housemaid, was an intelligent and ambitious man and was at the time of Hitler's birth, a senior customs official in Lower Austria. Alois had been married before. Klara Polzl, Hitler's mother, left home at sixteen to to join the household of her second cousin, Alois Hitler. Franziska saw Klara as a potential rival and insisted that she left the household. The first of the children of Alois's third marriage, Gustav, was born in May 1885, to be followed in September the following year by a second child, Ida, and another son, Otto, who died only days after his birth. In 1895, when Hitler was six years old, his father, Alois Hitler retired from government service. Alois was an authoritarian, overbearing, domineering husband and a stern, distant, aggressive and violent father. Dr.

History - World Wars: The Rise of Adolf Hitler History of the Jews during World War II Group of Jewish parachutists under British command, who was sent into Slovakia. Palestine, wartime World War II is the most tragic period in Jewish history. German Nazi occupied Europe[edit] By World War II, nearly all Jewish companies had either collapsed under financial pressure and declining profits, or had been forced to sell out to the Nazi-German government as part of the "Aryanization" policy inaugurated in 1937. The first of these pogroms was Kristallnacht in Nazi Germany, often called Pogromnacht, or "night of broken glass," in which Jewish homes were ransacked in numerous German cities along with 11,000 Jewish shops, towns and villages,[1] as civilians and SA stormtroopers destroyed buildings with sledgehammers, leaving the streets covered in smashed windows — the origin of the name "Night of Broken Glass." By December 1941, Adolf Hitler decided to completely exterminate European Jews. Spain[edit] During the war, Spain became an unlikely haven for several thousand Jews.

Muslims and Jews in History The historical interaction of Judaism and Islam started in the seventh century with the origin and spread of Islam in the Arabian peninsula. Judaism and Islam share a common origin in the Middle East through Abraham, and there are many shared aspects between the two religions in their fundamental religious outlook, structure, jurisprudence and practice. At the heart of the two faiths is a monotheistic vision which resists any compromise on the idea of the transcendence and unity of God who is envisaged as just and merciful and who has revealed a way of life in accordance with these values for the benefit of human society. Islam and Judaism do not have clergy who by virtue of sacrament are separate from the rest of the community. Muslims regard Jews and Christians as "People of the Book". There are different opinions among scholars regarding the character and origin of the Jewish communities that the Prophet Mohammed encountered in Arabia.

Adolf Hitler was the dictator of Germany during the second World War. He ruled the society and made them believe they should get rid of jewish people. He wanted a pure race composed only of people with blue eyes and blond hair. His personnality is very similar to the way the amerincans ruled the aboriginals taking away their culture. More specifically, his leadership skills can be compaired to Mrs Dwer's. by stephnso Oct 31

Adolf Hitler was the mysterious man behind the Second World War. He was the leader of the terrible group, the Nazis. It was his idea to extinct the Jewish population, because he wanted a 'perfect' society, which to him meant people with blue eyes and blond hair. Hitler can be compared to Mrs. Dwyer, they're both the leaders, Mrs Dwyer being the principal, hits students, takes away their culture and everything they ever knew. by sofiapetsalis Oct 29