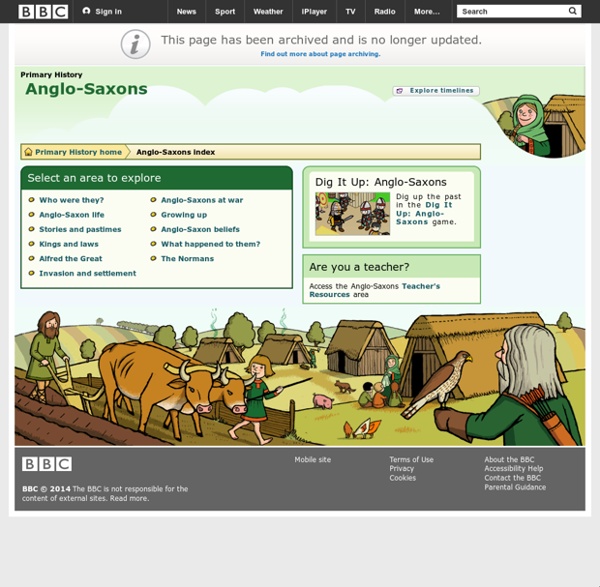 Write Your Name in Runes Write Your Name in Runes The runic alphabet, or Futhark, gets its name from its first six letters (f, u, th, a, r, k), much like the word "alphabet" derives from the first two letters of the Greek alphabet, alpha and beta. Each rune not only represents a phonetic sound but also has its own distinct meaning often connected with Norse mythology. Scholars believe that early Germanic and Scandinavian peoples used the runes originally as a means of communication and only later for magical purposes. Fehu

Anglo Saxon Weapons & Armour - Angelcynn Re-Enactment Society The principle weapon of the Anglo-Saxons was the spear. Spearheads came in many styles (Swanton classified 21 different forms), but were usually leaf- or 'kite-' shaped and had a socket for attachment to the shaft. It was usually diamond-shaped or lentoid in cross section, while the socket which continued from the narrow neck of the spearhead was split on one side and usually had an iron rivet to attach it to the shaft, which was usually of ash. Spearheads vary considerably in length from a few inches to two feet or more, and the basic forms change very little throughout the whole Anglo-Saxon period. The overall length of the spear was around 6'6" - 8' (2.00 - 2.50m), and the butt of the spear was often capped with a metal ferrule.

Anglo-Saxon Anglo-Saxon, term used historically to describe any member of the Germanic peoples who, from the 5th century ce to the time of the Norman Conquest (1066), inhabited and ruled territories that are today part of England and Wales. According to St. Bede the Venerable, the Anglo-Saxons were the descendants of three different Germanic peoples—the Angles, Saxons, and Jutes. By Bede’s account, those peoples originally migrated from northern Germany to the island of Britain in the 5th century at the invitation of Vortigern, a ruler of Britons, to help defend his kingdom against marauding invasions by the Picts and Scotti, who occupied what is now Scotland. Archaeological evidence suggests that the first migrants from the Germanic areas of mainland Europe included settlers from Frisia and antedated the Roman withdrawal from Britain about 410 ce.

Anglo-Saxon clothes - women 5th to 7th centuries Women wore an under-dress of linen or wool with long sleeves and a draw-string neck. Sleeves were fastened with clasps for wealthier women, or drawn together with braid or string for poorer women. The outer dress was a tube of material, rather like a pinafore, and often called a ‘peplos’. Who were the Anglo-Saxons? The Angle, Saxon, and Jute are known as the Anglo-Saxons. The Angles and the Saxon tribes were the largest of the three attacking tribes and so we often know them as Anglo-Saxons. They shared the same language but were each ruled by different strong warriors. Anglo-Saxons The Anglo-Saxons were warrior-farmers and came from north-western Europe. They began to invade Britain while the Romans were still in control.

The Anglo-Saxon Chronicle Online Medieval and Classical Library Release #17 Originally compiled on the orders of King Alfred the Great, approximately A.D. 890, and subsequently maintained and added to by generations of anonymous scribes until the middle of the 12th Century. The original language is Anglo-Saxon (Old English), but later entries are essentially Middle English in tone. Translation by Rev. James Ingram (London, 1823), with additional readings from the translation of Dr. J.A. Anglo-Saxon warfare The period of Anglo-Saxon warfare spans the 5th Century AD to the 11th in England. Its technology and tactics resemble those of other European cultural areas of the Early Middle Ages, although the Anglo-Saxons, unlike the Continental Germanic tribes such as the Franks and the Goths, do not appear to have regularly fought on horseback.[1] Evidence[edit] Although much archaeological evidence for Anglo-Saxon weaponry exists from the Early Anglo-Saxon period due to the widespread inclusion of weapons as grave goods in inhumation burials, scholarly knowledge of warfare itself relies far more on the literary evidence, which was only being produced in the Christian context of the Late Anglo-Saxon period. These literary sources are almost all authored by Christian clergy, and thus do not deal specifically with warfare; for instance, Bede's Ecclesiastical History of the English People mentions various battles that had taken place but does not dwell on them. Battlefield tactics[edit]

Anglo Saxon life - Food and Drink The Anglo-Saxons loved eating and drinking and would often have feasts in the Hall. The food was cooked over the fire in the middle of the house; meat was roasted and eaten with bread. They drank ale and mead - a kind of beer made sweet with honey - from great goblets and drinking horns. After the feast a minstrel would play a harp and sing songs of battles and heroes. Anglo-Saxons ate what they grew. They grew Anglo-Saxon clothes - men 5th and 6th centuries Men wore wool or linen hip-length undershirts with long sleeves, and probably loin-cloths. Woollen trousers were held up with a belt threaded through loops. A tunic was pulled over the head, and reached down to the knees.

A workshop on the Anglo-Saxons for year 5 and 6 This workshop is designed to cover the Anglo-Saxons unit of the KS2 National Curriculum for History. It is suitable for year 5 or 6. Main Activities: 1. Learn about Anglo-Saxon weapons and armour Anglo Saxon Armour SUTTON HOO HELMET: This helmet was found in the ship-grave at Sutton Hoo. Can you see the two dragon's heads nose-to-nose at the front? From the little pieces it is possible to see what the whole helmet might have looked like: Reconstructed helmet.