Alfred the Great: The Most Perfect Man in History? 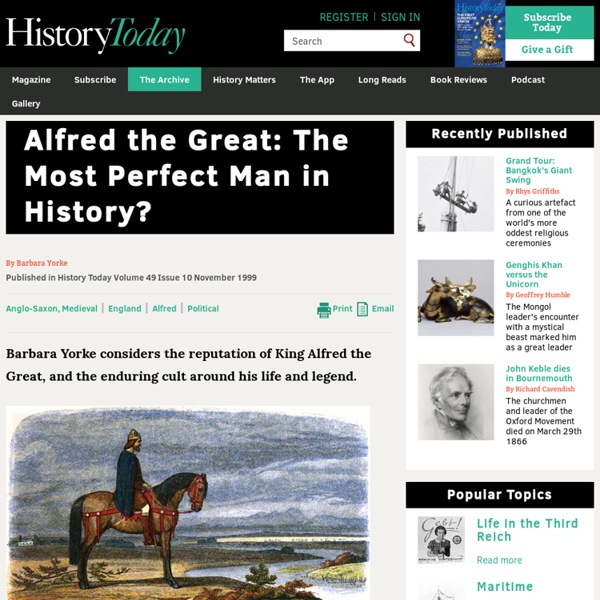 King Alfred of Wessex (r.871-99) is probably the best known of all Anglo-Saxon rulers, even if the first thing to come into many people’s minds in connection with him is something to do with burnt confectionery. The year 1999 saw the 1100th anniversary of his death on October 26th, 899, at the age of about 50. The occasion is being marked with conferences and exhibitions in Winchester, Southampton and London, but the scale of celebrations will be modest compared with those which commemorated his millenary, and culminated in the unveiling by Lord Rosebery of his statue in Winchester. Alfred’s reputation still stands high with historians, though few would now want to follow Edward Freeman in claiming him as ‘the most perfect character in history’ (The History of the Norman Conquest of England, 5 volumes, 1867-79). There can be no doubt that Alfred’s reign was significant, both for the direction of the country’s development and for the fortunes of his descendants. Anglo-Saxons!

Saxon Kings: House of Wessex Æthelwulf (839-58 AD) Æthelwulf was the son of Egbert and a sub-king of Kent. He assumed the throne of Wessex upon his father's death in 839. He was an only child, but had fathered five sons, by his first wife, Osburga. Æthelwulf was a wise and capable ruler, whose vision made possible the beneficial reign of his youngest son, Alfred the Great. Æthelbald (858-60 AD) While his father, Æthelwulf, was on pilgrimage to Rome in 855, Æthelbald plotted with the Bishop of Sherbourne and the ealdorman of Somerset against him. Æthelwulf died in 858, and full control passed to Æthelbald. Æthelbert (860-66 AD) Very little is known about Æthelbert, who took his rightful place in the line of succession to the throne of Wessex at around 30 years of age. Æthelred (866-71 AD) Anglo-Saxon king of Wessex, and son of King Æthelwulf, who ruled England during a time of great pressure from the invading Danes. Alfred, the Great (871-900 AD) Æthelstan (924-40 AD) Edmund I (940-46 AD) Eadred (946-55 AD)

Primary History - Anglo-Saxons - Anglo-Saxon beliefs Anglo-Saxon Culture The Anglo-Saxons were Germanic barbarians who invaded Britain and took over large parts of the island in the centuries following the withdrawal of the Roman Empire. They were initially less gentrified than other post-Roman barbarian groups such as the Franks or Ostrogoths because they had less contact with Mediterranean civilization. The Anglo-Saxons were originally pagan in religion. The main group, from northwestern Germany and Denmark, was divided into Angles, Saxons, and Jutes. German tribal affiliations were loose and the original invaders included people from other Germanic groups as well. Although some of the early Anglo-Saxon invaders had Celtic-influenced names, such as Cedric, the founder of the house of Wessex, the Anglo-Saxons had a pronounced awareness of them-selves as different from the peoples already inhabiting Britain. The early Anglo-Saxons highly valued courage and skill in battle, as reflected in the most significant surviving Anglo-Saxon poem, Beowulf.

Anglo-Saxon literature - English and Related Literature, The University of York Overview The poetry and prose of the Anglo-Saxons stands at the beginnings of English literature. Between the arrival of the Anglo-Saxons in Britain and the Norman Conquest, Anglo-Saxon literature played a key role in the emergence of an English nation and identity and in transforming the world of writing from a Latin one to a vernacular one. Its literature is simultaneously conservative and radically innovative. It preserved form, content and values from an ancient and oral poetic tradition predating the coming of Christianity: Beowulf and other heroic poetry have their origins in a legendary Germanic past. But because of the conversion of the Anglo-Saxons to Christianity, the literature also affords the opportunity to study the transformation of the Germanic world through contact with Rome and its Latin literature. Students will be required to purchase Peter Baker, An Introduction to Old English, 2nd edn, 2007. Aims and Objectives

Anglo-Saxon | people Anglo-Saxon, term used historically to describe any member of the Germanic peoples who, from the 5th century ce to the time of the Norman Conquest (1066), inhabited and ruled territories that are today part of England and Wales. According to St. Bede the Venerable, the Anglo-Saxons were the descendants of three different Germanic peoples—the Angles, Saxons, and Jutes. The peoples of each of the various Anglo-Saxon kingdoms spoke distinctive dialects, which evolved over time and together became known as Old English. The term Anglo-Saxon seems to have been first used by Continental writers in the late 8th century to distinguish the Saxons of Britain from those of the European continent, whom St. “Anglo-Saxon” continues to be used to refer to a period in the history of Britain, generally defined as the years between the end of Roman occupation and the Norman Conquest.

History - Ancient History in depth: The Anglo-Saxons Anglo-Saxons: a brief history Publication date: 13th January 2011 King Arthur as one of the Nine Worthies, detail from the 'Christian Heroes Tapestry' This period is traditionally known as the Dark Ages, mainly because written sources for the early years of Saxon invasion are scarce. It is a time of war, of the breaking up of Roman Britannia into several separate kingdoms, of religious conversion and, after the 790s, of continual battles against a new set of invaders: the Vikings. Climate change had an influence on the movement of these new invaders to Britain: in the centuries after 400 AD Europe's average temperature was 1°C warmer than we have today, and in Britain grapes could be grown as far north as Tyneside. Warmer summers meant better crops and a rise in population in the countries of northern Europe. At the same time melting polar ice caused more flooding in low areas, particularly in what is now Denmark, Holland and Belgium. A short history of the Anglo-Saxons in Britain Anglo-Saxon kingdoms 1. 2. 3. 4. 5. 6.

Anglo-Saxons Germanic tribes who started to inhabit parts of Great Britain from the 5th century onwards The Anglo-Saxons were a cultural group who inhabited England in the Early Middle Ages. They traced their origins to settlers who came to Britain from mainland Europe in the 5th century. However, the ethnogenesis of the Anglo-Saxons happened within Britain, and the identity was not merely imported. Anglo-Saxon identity arose from interaction between incoming groups from several Germanic tribes, both amongst themselves, and with indigenous Britons. Many of the natives, over time, adopted Anglo-Saxon culture and language and were assimilated. The history of the Anglo-Saxons is the history of a cultural identity. Ethnonym The term Angli Saxones seems to have first been used in mainland writing of the 8th century; Paul the Deacon uses it to distinguish the English Saxons from the mainland Saxons (Ealdseaxe, literally, 'old Saxons').[13] The name therefore seemed to mean "English" Saxons. Life and society

The Anglo-Saxon Hero by Christopher Garcia In Anglo-Saxon culture and literature, to be a hero was to be a warrior. A hero had to be strong, intelligent, and courageous. Warriors had to be willing to face any odds, and fight to the death for their glory and people. In Beowulf, the Anglo-Saxon hero is well defined by the actions of Beowulf. Strength and physical appearance are essential to the Anglo-Saxon warrior. I resolved, when I set out on the sea, sat down in the sea-boat with my band of men, that I should altogether fulfill the will of your people or else fall in slaughter, fast in the foe's grasp. When Beowulf speaks these words, he shows his great courage, and displays the proper attitude of the Anglo-Saxon warrior. Beowulf also shows that a hero must be humble. Like Beowulf, Ibn Fadlan shows many honorable characteristics in The 13th Warrior. There are, however, some character traits that pertain more to today's heroes in the movie.

The characteristics of Anglo-Saxon poetry - BritLitBernie2012 Wiki - Wikia Copied and then edited from those "vypracované otazky verze 2" 600 – 1100 AD (up to 1066) Wiki(en) Germanic tribes invaded England in the 5th century, after the Roman withdrawal, brought with them the Old English, of Anglo-Saxon. By the end of the 7th century invasion ended. They also brought oral poetic tradition. The value of human life was nothing, the warrior wanted to die in a famous fight. Anglo – Saxons had runic script, but this was used only for special occasions. The oldest Anglo-Saxon literature grew out of the confluence of two traditions: the paganism of the Anglo-Saxons the Christian culture Old English : many dialects were spoken. Old English had many inflections, large consonant clusters, borrowings from Latin and Scandinavian. The earliest written English words are from the 7th century. Almost all this poetry is composed without rhyme, in a characteristic line, or verse, of four stressed syllables alternating with an indeterminate number of unstressed ones. Edit Edit Caedmon