Anglo-Saxon Period. Lee04 oldenglish. Anglo-Saxon Poetry: Characteristics & Examples. In this lesson, we will review the general history of Anglo-Saxon society and its era. 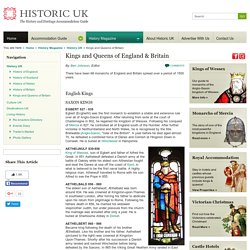 English Kings EGBERT 827 - 839 Egbert (Ecgherht) was the first monarch to establish a stable and extensive rule over all of Anglo-Saxon England. After returning from exile at the court of Charlemagne in 802, he regained his kingdom of Wessex. Following his conquest of Mercia in 827, he controlled all of England south of the Humber. AETHELWULF 839-856King of Wessex, son of Egbert and father of Alfred the Great. AETHELBALD 856 - 860 The eldest son of Aethelwulf, Æthelbald was born around 834. AETHELBERT 860 - 866 Became king following the death of his brother Æthelbald. AETHELRED I 866 - 871 Aethelred succeeded his brother Aethelbert. ALFRED THE GREAT 871 - 899 - son of AETHELWULF Born at Wantage in Berkshire around 849, Alfred was well educated and is said to have visited Rome on two occasions.

Myths of British ancestry. Read Stephen Oppenheimer’s follow-up to this article here, in the June 2007 edition of Prospect, as he answers some of the many comments and queries readers have sent in response to his analysis. 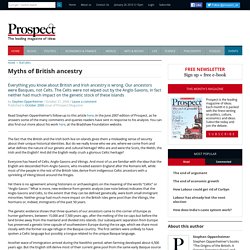 You can also find out more about his work here, at the Bradshaw Foundation website. The fact that the British and the Irish both live on islands gives them a misleading sense of security about their unique historical identities. But do we really know who we are, where we come from and what defines the nature of our genetic and cultural heritage? Anglo-Saxon. Anglo-Saxon, term used historically to describe any member of the Germanic peoples who, from the 5th century ce to the time of the Norman Conquest (1066), inhabited and ruled territories that are today part of England and Wales.

According to St. Bede the Venerable, the Anglo-Saxons were the descendants of three different Germanic peoples—the Angles, Saxons, and Jutes. By Bede’s account, those peoples originally migrated from northern Germany to the island of Britain in the 5th century at the invitation of Vortigern, a ruler of Britons, to help defend his kingdom against marauding invasions by the Picts and Scotti, who occupied what is now Scotland. Archaeological evidence suggests that the first migrants from the Germanic areas of mainland Europe included settlers from Frisia and antedated the Roman withdrawal from Britain about 410 ce. Life in Anglo-Saxon England. 1. 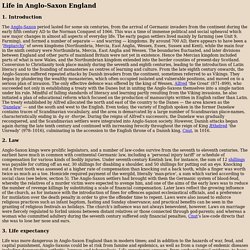 Anglo-Saxon kings were prolific legislators, and a number of law-codes survive from the seventh to eleventh centuries. 3. 4. A substantial literature survives from Anglo-Saxon England in both Latin and Old English. Other original writings in Old English include sermons, saints’ lives and wills. History - Ancient History in depth: The Anglo-Saxons.