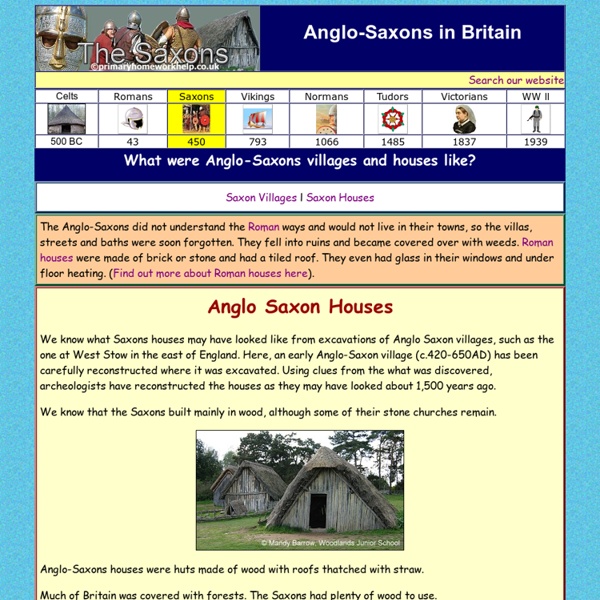 We know what Saxons houses may have looked like from excavations of Anglo Saxon villages, such as the one at West Stow in the east of England. Here, an early Anglo-Saxon village (c.420-650AD) has been carefully reconstructed where it was excavated. Using clues from the what was discovered, archeologists have reconstructed the houses as they may have looked about 1,500 years ago. We know that the Saxons built mainly in wood, although some of their stone churches remain. Anglo-Saxons houses were huts made of wood with roofs thatched with straw. Much of Britain was covered with forests. There was only one room where everybody ate, cooked, slept and entertained their friends. The houses were built facing the sun to get as much heat and light as possible. The Hall The biggest house in an Anglo Saxon village was the Hall, the Chief's house. The Hall was long, wide and smoky, with the fire on a stone in the middle. The windows were slits called eye-holes. On the walls were shields and antlers.

What Did The Anglo-Saxons Eat? | Picture BritainPicture Britain I find that one of the most fascinating aspects of history is the food that was prepared and enjoyed in the old days. Crumbling stones and bits of metalwork only tell part of the story—flavors and feasts go much deeper into the heart and soul of a culture. The Anglo-Saxon invasion of Britain in the 4th century marked a turning point in English history, finally breaking the hold of the Romans over their province of Britannia, and this is also when the early English men and women began to discover their own unique cuisine. Rome Disappears As we saw when looking at Romano-British food, the Romans were nothing if not gourmets. Anglo-Saxon Culture Though the post-Roman period in Britain is referred to as the “Dark Ages,” you’d be wrong if you thought that these people were a bunch of uncivilized cave-dwellers. The Four Kingdoms: The early Anglo-Saxon tribes eventually consolidated into four main kingdoms: Northumbria, Mercia, East Anglia and Wessex. Popular Foods Anglo-Saxon Pottage Sources:

Anglo Saxon Weapons & Armour - Angelcynn Re-Enactment Society The principle weapon of the Anglo-Saxons was the spear. Spearheads came in many styles (Swanton classified 21 different forms), but were usually leaf- or 'kite-' shaped and had a socket for attachment to the shaft. It was usually diamond-shaped or lentoid in cross section, while the socket which continued from the narrow neck of the spearhead was split on one side and usually had an iron rivet to attach it to the shaft, which was usually of ash. Spears are found in around 86% of the Anglo-Saxon burials that contain weapons. Swanton's Classification for Early Anglo-Saxon Spearheads Type A This type of spearhead has a barbed head with a long metal shank connected to a socket. 'Angons are spears that are neither very short nor very long, but suitable for throwing, should it be necessary, as well as for engagement at close quarters. Suppose a Frank throws his angon in an engagement. Type B2 This type of spearhead is of a mid-ribbed, leaf-shaped form. Scramaseaxes Swords

Anglo-Saxon clothes - women | Tha Engliscan Gesithas 5th to 7th centuries Women wore an under-dress of linen or wool with long sleeves and a draw-string neck. Sleeves were fastened with clasps for wealthier women, or drawn together with braid or string for poorer women. The outer dress was a tube of material, rather like a pinafore, and often called a ‘peplos’. A pair of shoulder-brooches or clasps held this onto the under-dress. A belt was worn, from which various accessories were hung. 7th to 9th centuries Shoulder-brooches and wrist-clasps went out of fashion, and the sleeves of the over-dress now came to just below elbow-length on the arms and calf-length around the legs. 10th to 11th centuries The under-dress was now often pleated or folded, while the sleeves of the over-dress tended to flare towards the wrist. Children seem to have worn very much the same style of clothing as adults, but in smaller sizes. Making clothes was women’s work, and spinning and weaving were among the main activities of women in the Anglo-Saxon period.

Primary History - Anglo-Saxons - Anglo-Saxon life Anglo Saxon life - Food and Drink The Anglo-Saxons loved eating and drinking and would often have feasts in the Hall. The food was cooked over the fire in the middle of the house; meat was roasted and eaten with bread. They drank ale and mead - a kind of beer made sweet with honey - from great goblets and drinking horns. After the feast a minstrel would play a harp and sing songs of battles and heroes. Anglo-Saxons ate what they grew. They grew cereals - Wheat and rye for bread, barley for brewing and oats for animal food and porridge. Exotic foods such as potatoes, tomatoes, bananas, pineapples - fruits and vegetables of the New World, were unknown to the Anglo-Saxons. Drink Barley was used to make weak beer, which was drunk instead of water. Most Anglo-Saxons were vegetarians because they could not get meat very often. Animals Pigs were important for food because they produce large litters, which would quickly mature and be ready for slaughter. Fish The Anglo-Saxons ate fish which they caught in the rivers and the seas.

Anglo-Saxon clothes - men | Tha Engliscan Gesithas 5th and 6th centuries Men wore wool or linen hip-length undershirts with long sleeves, and probably loin-cloths. Woollen trousers were held up with a belt threaded through loops. A tunic was pulled over the head, and reached down to the knees. It was usually decorated at the wrists, neck and hem, and was long-sleeved. A belt was worn at the waist, often with a decorated buckle and strap-end. 7th to 11th centuries Tunics tended to have extra pleats inserted at the front, and sleeves became fairly tight-fitting between elbow and wrist. There was undoubtedly much variation according to region, period and status. Most clothes were made at home, and would almost certainly have undergone many repairs, or have been handed down, before being eventually cut up for rags or thrown away. Underclothes were not usually dyed, but left in their natural colour, or perhaps sun-bleached.

Anglo-Saxon warfare The period of Anglo-Saxon warfare spans the 5th Century AD to the 11th in England. Its technology and tactics resemble those of other European cultural areas of the Early Middle Ages, although the Anglo-Saxons, unlike the Continental Germanic tribes such as the Franks and the Goths, do not appear to have regularly fought on horseback.[1] Evidence[edit] Although much archaeological evidence for Anglo-Saxon weaponry exists from the Early Anglo-Saxon period due to the widespread inclusion of weapons as grave goods in inhumation burials, scholarly knowledge of warfare itself relies far more on the literary evidence, which was only being produced in the Christian context of the Late Anglo-Saxon period. These literary sources are almost all authored by Christian clergy, and thus do not deal specifically with warfare; for instance, Bede's Ecclesiastical History of the English People mentions various battles that had taken place but does not dwell on them. Battlefield tactics[edit] See also[edit]

Anglo-Saxon life Life and Religion It is difficult to generalize about an era as lengthy as the Dark Ages, but we'll do it anyway. The Anglo-Saxons were pagans when they came to Britain. They worshipped gods of nature and held springs, wells, rocks, and trees in reverence. Religion was not a source of spiritual revelation, it was a means of ensuring success in material things. For example, you might pray to a particular goddess for a successful harvest, or for victory in battle. Religious observance consisted of invocations and charms to ensure the gods' help in securing a desired outcome in the material world, though the presence of grave goods indicates a belief in an afterlife. Saxons dining A Lord's LifeWe know little about how most people lived, for so little remains. Society was divided into several social classes, which might vary from place to place. Below the king there were two levels of freemen, the upper class thanes and the lower class ceorls (churls). Slavery - the way in...

Museum: Anglo-Saxon Discovery - Hilda and Ceolwulf's Day Ceolwulf and Hilda are bother and sister. They live on a farm with their parents, Burgred and Aelfwyn. They both get up early in the morning, when the sun rises. During the morning, they both help look after the animals and fetch water from the nearby stream. During the day Ceolwulf helps his father in the fields and around the farm. Find out more about Anglo-Saxon weapons