The Anglo-Saxon kings > Alfred 'The Great' 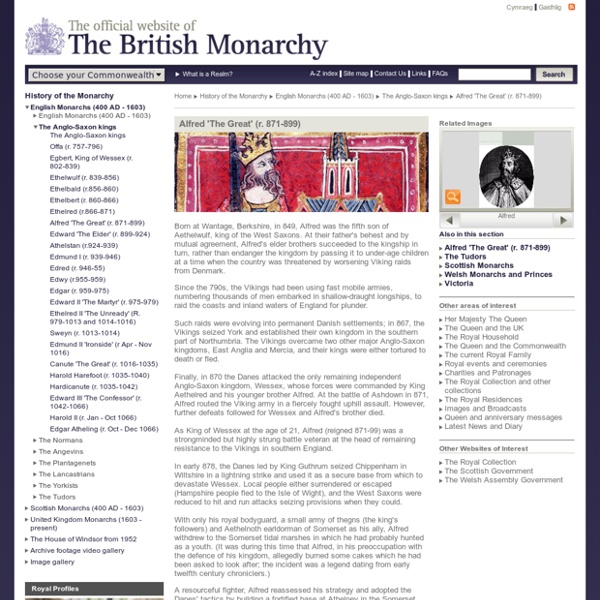 Alfred 'The Great' (r. 871-899) Born at Wantage, Berkshire, in 849, Alfred was the fifth son of Aethelwulf, king of the West Saxons. At their father's behest and by mutual agreement, Alfred's elder brothers succeeded to the kingship in turn, rather than endanger the kingdom by passing it to under-age children at a time when the country was threatened by worsening Viking raids from Denmark. Since the 790s, the Vikings had been using fast mobile armies, numbering thousands of men embarked in shallow-draught longships, to raid the coasts and inland waters of England for plunder. Such raids were evolving into permanent Danish settlements; in 867, the Vikings seized York and established their own kingdom in the southern part of Northumbria. Finally, in 870 the Danes attacked the only remaining independent Anglo-Saxon kingdom, Wessex, whose forces were commanded by King Aethelred and his younger brother Alfred. Read some of Alfred's own writings (pdf, 80kB)

History - Alfred the Great The History of English - Old English (c. 500 - c.1100) About 400 Anglo-Saxon texts survive from this era, including many beautiful poems, telling tales of wild battles and heroic journeys. The oldest surviving text of Old English literature is “Cædmon's Hymn”, which was composed between 658 and 680, and the longest was the ongoing “Anglo-Saxon Chronicle”. But by far the best known is the long epic poem “Beowulf”. “Beowulf” may have been written any time between the 8th and the early 11th Century by an unknown author or authors, or, most likely, it was written in the 8th Century and then revised in the 10th or 11th Century. It was probably originally written in Northumbria, although the single manuscript that has come down to us (which dates from around 1000) contains a bewildering mix of Northumbrian, West Saxon and Anglian dialects. The 3,182 lines of the work shows that Old English was already a fully developed poetic language by this time, with a particular emphasis on alliteration and percussive effects.

King Alfred the Great Family tree poster & books House of Wessex Family Tree Detailed Tree Scottish King or Queen at the Time FAQs Name: King Alfred the GreatBorn: c.849 at Wantage, BerkshireParents: Aethelwulf and OsburhRelation to Elizabeth II: 32nd great-grandfatherHouse of: WessexBecame King: 871Married: Ealhswith of MerciaChildren: 5 children, Aelfthryth, Aethelflaed, Aethelgifu, Edward, AethelweardDied: October 26, 899Buried at: WinchesterSucceeded by: his son Edward Anglo-Saxon king 871–899 who defended England against Danish invasion and founded the first English navy. He succeeded his brother Aethelred to the throne of Wessex in 871, and a new legal code came into force during his reign. He encouraged the translation of scholarly works from Latin (some he translated himself), and promoted the development of the Anglo-Saxon Chronicle. Alfred was born at Wantage, historically in Berkshire but currently in Oxfordshire, the youngest son of Aethelwulf (d. 858), king of the West Saxons. Quotes:

Anglo-Saxon Culture Michael Delahoyde Washington State University History: When Rome was weakening early in the fifth century c.e., troops in the outlying regions, including the British Isles, were withdrawn. Walls, roads, and baths remain even now. They also left the native Celts and Celtic-speaking Britons somewhat christianized, and Picts and Scots in the north, but "political" power fell to unstable tribal units. The Anglo-Saxon social structure consisted of tribal units led by chieftains ("kings," or "lords") who, theoretically at least, earned their respect from their warriors (or "retainers," or "thanes," the group being called a "comitatus"). Fighting was a way of life, and not to avenge the death of a family member was a social disgrace, so endlessly intricate blood-feuds generated perpetual excuses for going to war. Occasionally some tribes temporarily grouped together for a larger war task, or against Viking invaders, but there was no national unity or any Round Table in these early years.

Where did the Anglo-Saxons come from? The Anglo-Saxons left their homelands in northern Germany, Denmark and The Netherlands and rowed across the North Sea in wooden boats to Britain. They sailed across the North Sea in their long ships, which had one sail and many oars. They made a series of attacks on different parts of the country over a period of years and under a number of leaders. The Jutes settled mainly in Kent. The Angles settled in East Anglia. The Saxons settled in areas of Essex (East Saxons), Sussex (South Saxons), Middlesex (Middle Saxons), and Wessex (West Saxons). British Kingdoms (each area ruled by a different king)

Anglo-Saxon | people Anglo-Saxon, term used historically to describe any member of the Germanic peoples who, from the 5th century ce to the time of the Norman Conquest (1066), inhabited and ruled territories that are today part of England and Wales. According to St. Bede the Venerable, the Anglo-Saxons were the descendants of three different Germanic peoples—the Angles, Saxons, and Jutes. By Bede’s account, those peoples originally migrated from northern Germany to the island of Britain in the 5th century at the invitation of Vortigern, a ruler of Britons, to help defend his kingdom against marauding invasions by the Picts and Scotti, who occupied what is now Scotland. The peoples of each of the various Anglo-Saxon kingdoms spoke distinctive dialects, which evolved over time and together became known as Old English. The term Anglo-Saxon seems to have been first used by Continental writers in the late 8th century to distinguish the Saxons of Britain from those of the European continent, whom St.

History - Ancient History in depth: The Anglo-Saxons Anglo-Saxon Poetry The initial page of the Peterborough Chronicle, likely scribed around 1150, is one of the major sources of the Anglo-Saxon Chronicle. Anglo-Saxon Poetry (or Old English Poetry) encompasses verse written during the 600-year Anglo-Saxon period of British history, from the mid-fifth century to the Norman Conquest of 1066. Almost all of the literature of this period was orally transmitted, and almost all poems were intended for oral performance. Although most Anglo-Saxon poetry was never written down and as such is lost to us, it was clearly a thriving literary language, and there are extant works in a wide variety of genres including epic poetry, Bible translations, historical chronicles, riddles, and short lyrics. Linguistic and Textual Overview A large number of manuscripts remain from the 600 year Anglo-Saxon period, although most were written during the last 300 years (ninth–eleventh century), in both Latin and the vernacular. Works The poets Heroic poems Wisdom poetry Christian poetry