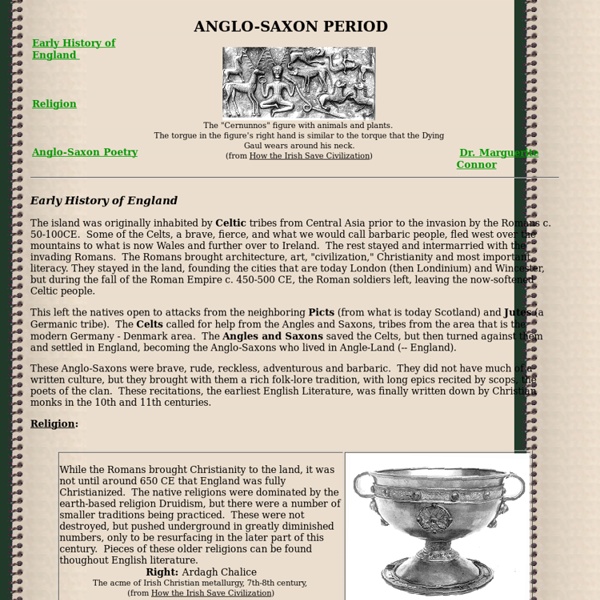 Early History of England The island was originally inhabited by Celtic tribes from Central Asia prior to the invasion by the Romans c. 50-100CE. Some of the Celts, a brave, fierce, and what we would call barbaric people, fled west over the mountains to what is now Wales and further over to Ireland. The rest stayed and intermarried with the invading Romans. This left the natives open to attacks from the neighboring Picts (from what is today Scotland) and Jutes (a Germanic tribe). These Anglo-Saxons were brave, rude, reckless, adventurous and barbaric. Religion: Anglo-Saxon Poetry There were a number of qualities found in Anglo-Saxon poetry: Heroic behavior is praised Almost no romantic love An overall effect to formalize and elevate language, often through the use of literary devices. back

Anglo-Saxon literature: Poetry There are two types of Old English poetry: the heroic, the sources of which are pre-Christian Germanic myth, history, and custom; and the Christian. Although nearly all Old English poetry is preserved in only four manuscripts—indicating that what has survived is not necessarily the best or most representative—much of it is of high literary quality. Moreover, Old English heroic poetry is the earliest extant in all of Germanic literature. Beowulf, a complete epic, is the oldest surviving Germanic epic as well as the longest and most important poem in Old English. The elegiac theme, a strong undercurrent in Beowulf, is central to Deor, The Wanderer, The Seafarer, and other poems. Much of the Old English Christian poetry is marked by the simple belief of a relatively unsophisticated Christianity; the names of two authors are known. Cynewulf, a later poet, signed the poems Elene, Juliana, and The Fates of the Apostles ; no more is known of him. The Columbia Electronic Encyclopedia, 6th ed.

The characteristics of Anglo-Saxon poetry - BritLitBernie2012 Wiki - Wikia Copied and then edited from those "vypracované otazky verze 2" 600 – 1100 AD (up to 1066) Wiki(en) Germanic tribes invaded England in the 5th century, after the Roman withdrawal, brought with them the Old English, of Anglo-Saxon. By the end of the 7th century invasion ended. They also brought oral poetic tradition. The value of human life was nothing, the warrior wanted to die in a famous fight. Anglo – Saxons had runic script, but this was used only for special occasions. The oldest Anglo-Saxon literature grew out of the confluence of two traditions: the paganism of the Anglo-Saxons the Christian culture Old English : many dialects were spoken. Old English had many inflections, large consonant clusters, borrowings from Latin and Scandinavian. The earliest written English words are from the 7th century. Almost all this poetry is composed without rhyme, in a characteristic line, or verse, of four stressed syllables alternating with an indeterminate number of unstressed ones. Edit Edit Caedmon

History - Ancient History in depth: The Anglo-Saxons Primary History - Anglo-Saxons - Kings and laws Anglosaxon Literature and Prose - Beaming Notes The Germanic forefathers of the English brought with them their own poetry but there is no evidence of them bringing any prose writings. The development of English prose wholly took place in England and was greatly facilitated by the introduction of Christianity. The early prose was utilitarian and we find its first traces in the collection of Laws such as the Laws of Ine and the opening pages of the chronicle which were kept in various monasteries such as Canterbury, Abingdon, Winchester, Worchester and Peterborough. Alfred has been called the “Father of English prose” and with good reasons. By far, the most important work of King Alfred is the Anglo-Saxon chronicle which was not composed by him but under his influence and orders starter being maintained as a regularly collected history of Britain. Aelfric has been called the greatest English prose writer till the Elizabethan time.

Anglo-Saxon literature - English and Related Literature, The University of York Overview The poetry and prose of the Anglo-Saxons stands at the beginnings of English literature. Between the arrival of the Anglo-Saxons in Britain and the Norman Conquest, Anglo-Saxon literature played a key role in the emergence of an English nation and identity and in transforming the world of writing from a Latin one to a vernacular one. Its literature is simultaneously conservative and radically innovative. It preserved form, content and values from an ancient and oral poetic tradition predating the coming of Christianity: Beowulf and other heroic poetry have their origins in a legendary Germanic past. But because of the conversion of the Anglo-Saxons to Christianity, the literature also affords the opportunity to study the transformation of the Germanic world through contact with Rome and its Latin literature. Students will be required to purchase Peter Baker, An Introduction to Old English, 2nd edn, 2007. Aims and Objectives

English Literature: Anglo Saxon OUR FIRST SPEECH. Our first recorded speech begins with the songs of Widsith and Deor, which the Anglo-Saxons may have brought with them when they first conquered Britain. In Old English, few books were written; most of those were written in Latin, for religious purposes. At first glance these songs in their native dress look strange as a foreign tongue; but when we examine them carefully we find many words that have been familiar since childhood. It is this old vigorous Anglo-Saxon language which forms the basis of our modern English. Hitherto the poetry, though written in English language is not strictly part of the literature of England. All the poetry is earnest and somber, and pervaded by fatalism and religious feelings. 1. love of freedom 2. responsiveness to nature, especially in her sterner moods; 3. strong religious conviction, and a belief in Wyrd, or Fate; 4. reverence for womanhood; and 5. a devotion to glory as the ruling motive in every warrior’s life. Northumbrian Literature