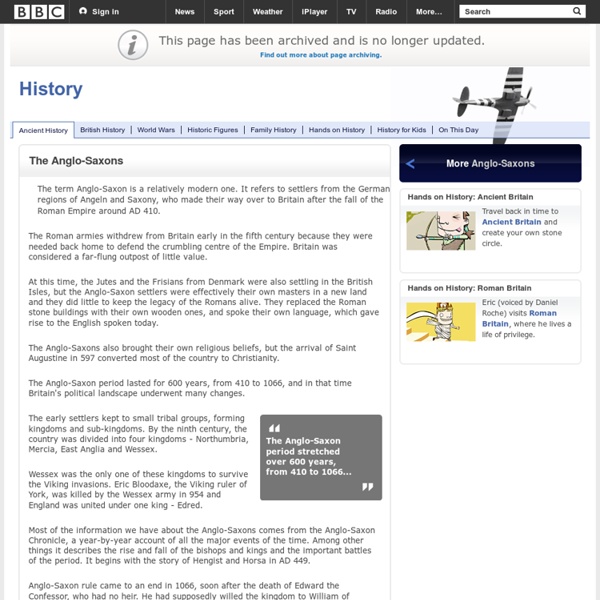 The term Anglo-Saxon is a relatively modern one. It refers to settlers from the German regions of Angeln and Saxony, who made their way over to Britain after the fall of the Roman Empire around AD 410. The Roman armies withdrew from Britain early in the fifth century because they were needed back home to defend the crumbling centre of the Empire. Britain was considered a far-flung outpost of little value. At this time, the Jutes and the Frisians from Denmark were also settling in the British Isles, but the Anglo-Saxon settlers were effectively their own masters in a new land and they did little to keep the legacy of the Romans alive. They replaced the Roman stone buildings with their own wooden ones, and spoke their own language, which gave rise to the English spoken today. The Anglo-Saxons also brought their own religious beliefs, but the arrival of Saint Augustine in 597 converted most of the country to Christianity.

Anglo-Saxons: a brief history Publication date: 13th January 2011 King Arthur as one of the Nine Worthies, detail from the 'Christian Heroes Tapestry' This period is traditionally known as the Dark Ages, mainly because written sources for the early years of Saxon invasion are scarce. Anglo-Saxon England Anglo-Saxon England England before the Germanic migration Back to the Syllabus Anglo-Saxons The history of the Anglo-Saxons is the history of a cultural identity. It developed from divergent groups in association with the people's adoption of Christianity, and was integral to the establishment of various kingdoms. Threatened by extended Danish invasions and military occupation of eastern England, this identity was re-established; it dominated until after the Norman Conquest.[4] The visible Anglo-Saxon culture can be seen in the material culture of buildings, dress styles, illuminated texts and grave goods.

Anglo-Saxon Anglo-Saxon, term used historically to describe any member of the Germanic peoples who, from the 5th century ce to the time of the Norman Conquest (1066), inhabited and ruled territories that are today part of England and Wales. According to St. Bede the Venerable, the Anglo-Saxons were the descendants of three different Germanic peoples—the Angles, Saxons, and Jutes. By Bede’s account, those peoples originally migrated from northern Germany to the island of Britain in the 5th century at the invitation of Vortigern, a ruler of Britons, to help defend his kingdom against marauding invasions by the Picts and Scotti, who occupied what is now Scotland.

Middle Ages for Kids: Anglo-Saxons of England History >> Middle Ages for Kids Who were the Saxons? The Saxons were a people from north Germany who migrated to the island of Britain around the 5th century. There were actually three main peoples: the Saxons, the Angles, and the Jutes. After these people moved to Britain they became known as the Anglo-Saxons. Eventually the name "Angles" became the "English" and their land became known as England. Anglo-Saxon Culture The Anglo-Saxons were Germanic barbarians who invaded Britain and took over large parts of the island in the centuries following the withdrawal of the Roman Empire. They were initially less gentrified than other post-Roman barbarian groups such as the Franks or Ostrogoths because they had less contact with Mediterranean civilization. The Anglo-Saxons were originally pagan in religion. The main group, from northwestern Germany and Denmark, was divided into Angles, Saxons, and Jutes. German tribal affiliations were loose and the original invaders included people from other Germanic groups as well. Although some of the early Anglo-Saxon invaders had Celtic-influenced names, such as Cedric, the founder of the house of Wessex, the Anglo-Saxons had a pronounced awareness of them-selves as different from the peoples already inhabiting Britain.

The Anglo-Saxon Influence on Romano-Britain: Research past and present Charlotte Russell University of Durham Abstract: The Romano-British to Anglo-Saxon transition in Britain is one of the most striking transitions seen in the archaeological record. Changes in burial practice between these periods, along with historical, anthropological, environmental and linguistic evidence have all been thought to indicate that a mass migration of Angles and Saxons into Britain occurred in the 5th century A.D. The writings of Gildas and Bede provide a starting point for research in this area, and their migration based viewpoints have long been the basis for research in other areas.