Anglo-Saxon literature - English and Related Literature, The University of York 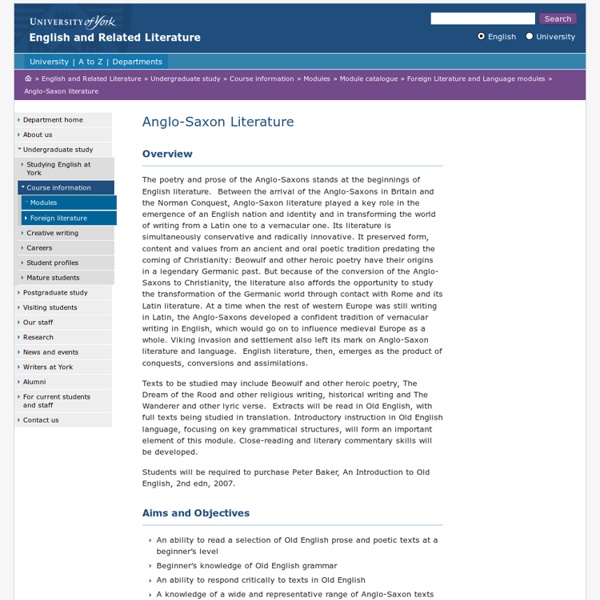 Overview The poetry and prose of the Anglo-Saxons stands at the beginnings of English literature. Between the arrival of the Anglo-Saxons in Britain and the Norman Conquest, Anglo-Saxon literature played a key role in the emergence of an English nation and identity and in transforming the world of writing from a Latin one to a vernacular one. Its literature is simultaneously conservative and radically innovative. Texts to be studied may include Beowulf and other heroic poetry, The Dream of the Rood and other religious writing, historical writing and The Wanderer and other lyric verse. Students will be required to purchase Peter Baker, An Introduction to Old English, 2nd edn, 2007. Aims and Objectives

Exploring the Depth and Beauty of Anglo-Saxon Literature This map shows kingdoms in the island of Great Britain at about the year 800 CE. When we hear the words “Anglo-Saxon literature,” Beowulf is probably the first thing that comes to mind. Then we might think of the beauty of illuminated manuscripts such as the Book of Durrow or the Lindisfarne Gospels. In this exclusive interview, James Blake Wiener talks with Professor Larry Swain of Bemidji State University about these works, as well as Norse and Irish influences on Anglo-Saxon literature and the significance of the Byzantines, Theodore and Hadrian, who came to Northumbria in the seventh century CE. Professor Swain recommends learning Old English in order to be able to read works in Old English, of course, but equally intriguing, to allow us to better express ourselves in modern English. JW: Professor Swain, what do you find so compelling about the Anglo-Saxons and their literature? LS: That is a difficult question to answer. At roughly the same time, I discovered J. Image Key: Dr.

Discribe the features of Anglo-Saxon Poetry in detail. - Homework Help The poetry of the Anglo-Saxons is defined by the following characteristics: 1. Anglo-Saxon poetry is written in blank verse. The term blank verse means that there is no end rhyme occurring from line to line. 2. 3. 4. 5. 6. Alfred the Great: The Most Perfect Man in History? King Alfred of Wessex (r.871-99) is probably the best known of all Anglo-Saxon rulers, even if the first thing to come into many people’s minds in connection with him is something to do with burnt confectionery. The year 1999 saw the 1100th anniversary of his death on October 26th, 899, at the age of about 50. The occasion is being marked with conferences and exhibitions in Winchester, Southampton and London, but the scale of celebrations will be modest compared with those which commemorated his millenary, and culminated in the unveiling by Lord Rosebery of his statue in Winchester. Alfred’s reputation still stands high with historians, though few would now want to follow Edward Freeman in claiming him as ‘the most perfect character in history’ (The History of the Norman Conquest of England, 5 volumes, 1867-79). Alfred is someone who has had greatness thrust upon him. How and why did he acquire his glowing reputation, and how does it stand up today? Anglo-Saxons!

The History of English - Old English (c. 500 - c.1100) About 400 Anglo-Saxon texts survive from this era, including many beautiful poems, telling tales of wild battles and heroic journeys. The oldest surviving text of Old English literature is “Cædmon's Hymn”, which was composed between 658 and 680, and the longest was the ongoing “Anglo-Saxon Chronicle”. But by far the best known is the long epic poem “Beowulf”. “Beowulf” may have been written any time between the 8th and the early 11th Century by an unknown author or authors, or, most likely, it was written in the 8th Century and then revised in the 10th or 11th Century. Old English was a very complex language, at least in comparison with modern English. Many of the most basic and common words in use in English today have their roots in Old English, including words like water, earth, house, food, drink, sleep, sing, night, strong, the, a, be, of, he, she, you, no, not, etc.

Anglo-Saxon | people Anglo-Saxon, term used historically to describe any member of the Germanic peoples who, from the 5th century ce to the time of the Norman Conquest (1066), inhabited and ruled territories that are today part of England and Wales. According to St. Bede the Venerable, the Anglo-Saxons were the descendants of three different Germanic peoples—the Angles, Saxons, and Jutes. By Bede’s account, those peoples originally migrated from northern Germany to the island of Britain in the 5th century at the invitation of Vortigern, a ruler of Britons, to help defend his kingdom against marauding invasions by the Picts and Scotti, who occupied what is now Scotland. Archaeological evidence suggests that the first migrants from the Germanic areas of mainland Europe included settlers from Frisia and antedated the Roman withdrawal from Britain about 410 ce. The peoples of each of the various Anglo-Saxon kingdoms spoke distinctive dialects, which evolved over time and together became known as Old English.

10 Notable Anglo-Saxon Works Besides Beowulf The heroic tale of Beowulf is the most noteworthy work of the Anglo-Saxon era and is often regarded as a major Germanic work but it is good to know about other notable works of the respective era that are important in their own ways. Anglo-Saxon era is marking of the official beginning of English literature; the literature of the respective era is also termed as the Germanic narrative and is reflective of the ancient Anglo-Saxon community. The literature of Germanic period is largely based on religious stories, lives and works of religious figures and tales composed by drawing inspiration from Biblical accounts. Below are 10 of the remarkable Anglo-Saxon works besides Beowulf, which are quite interesting to know, if not equally important. 1. Widsith is the supreme example of the oral courtly minstrelsy tradition commonly found in the Anglo-Saxon literature; the poem is the semi-autobiographical manuscript of such a minstrel known as a scop. 2. 3. 4. 5. 6. 7. 8. 9. 10.